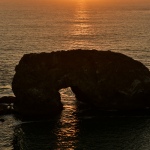 As another summer comes to a close, I am enjoying looking back at some photos from the past few months. In mid-August we had the chance to spend two weeks in Oregon, most of which we spent along the spectacular Oregon Coast. While not my first trip to the coast, this was my first time visiting some of the more remote southern sections of the coast, and over the course of the two weeks we were actually able to drive the entire Oregon section of Highway 101, all the way from Washington to California.

We began the trip in Astoria, gazing at the mouth of the Columbia River in Fort Stevens State Park and visiting the site of Fort Clatsop, quarters for the Lewis & Clark Expedition during the winter of 1805-1806. From there we travelled south to visit with friends in Rockaway Beach for several nights before continuing on to Newport and then heading inland for other adventures. A few days later we returned to the coast at the mouth of the Rogue River in Gold Beach, just 45 minutes or so north of the California border. After a quick drive into the Golden State, we began moving north, through Coos Bay, Bandon, Florence, and the Oregon Dunes before returning to Newport. After a final few days in the Lincoln City area, it was back up the Columbia River Gorge to Washington and back to work! Here are some of my favorite images from the trip, arranged from north to south: 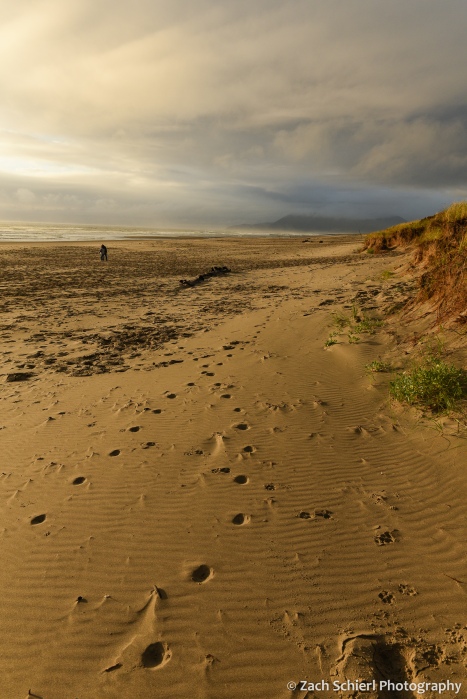 Late afternoon light on the beach in Rockaway Beach, Oregon. The northern third of the Oregon Coast is characterized by long stretches of wide, sandy beach. Sand is relatively abundant here thanks to the Columbia River, though the supply has been greatly diminished since dams started popping up on the Columbia beginning in the mid 1900s. 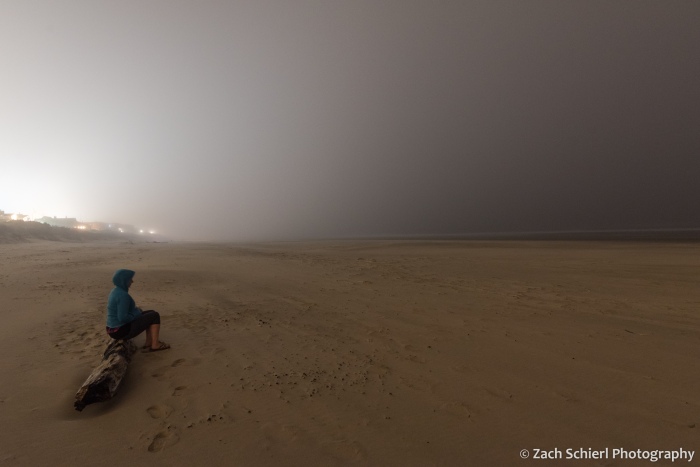 I had been hoping to do some night sky photography from the beach, but despite relatively benign daytime weather, most nights looked something like this, with dense mist and fog enveloping the shore. Here, lights from Rockaway Beach illuminate the fog. 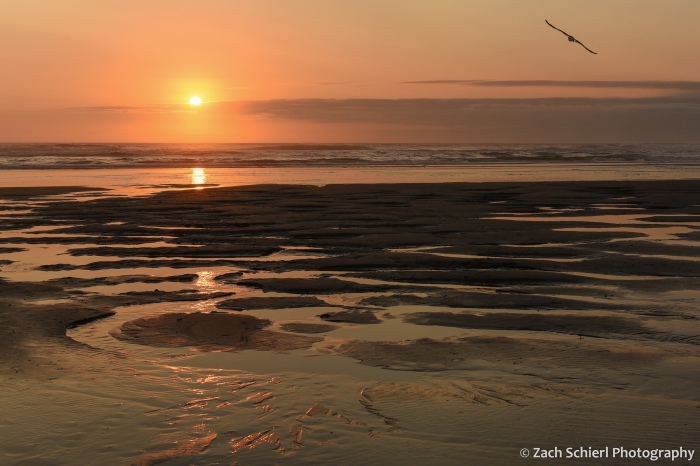 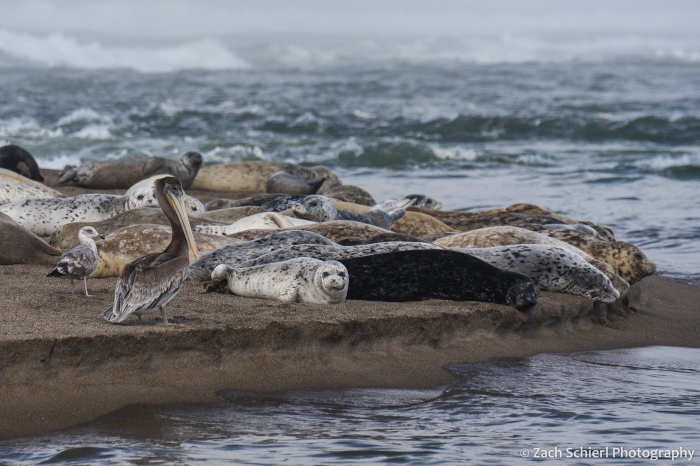 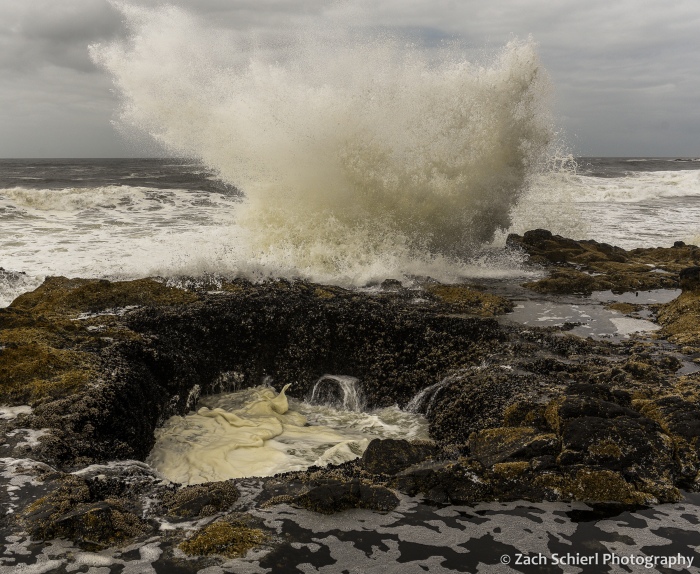 Thor’s Well is an interesting feature within the Cape Perpetua Scenic Area near Yachats. A ~10 foot wide hole in the rocky coastline, the Well connects to the open ocean via a small cave. The well alternately drains and fills as the waves roll in and out. Watching the water roll into the Well and waves crashing against the rocks was a mesmerizing experience.

Scattered bogs along the Oregon Coast host rare patches of Darlingtonia californica, the California Pitcher Plant. One of the few species of carnivorous plants native to the Pacific Northwest, the translucent patches on the leaves supposedly confuse insects trying to escape from inside the plants. 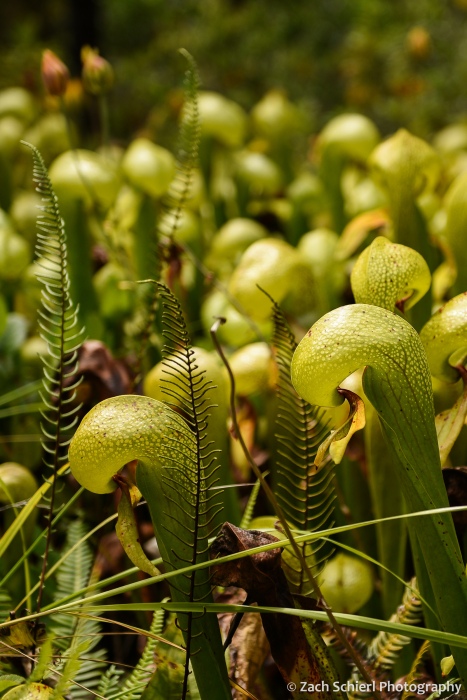 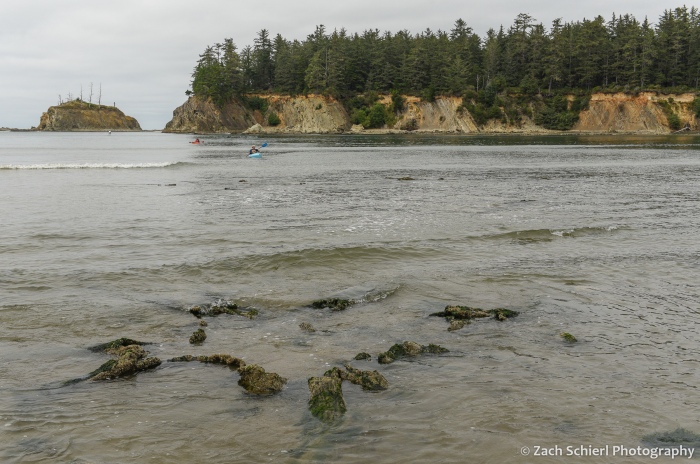 What at first glance appear to be rocks sticking up out of the water are actually the remains of a massive tree stump in Sunset Bay near North Bend. Large concentrations of dead trees, often partially buried in sand, are found all up and down the Oregon Coast, and are often referred to as “Ghost Forests”. Some of these trees, particularly the ones found in coastal estuaries, appear to have been killed by rapid subsidence associated with large earthquakes along the Cascadia Subduction Zone just offshore. Analysis and dating of these trees have revealed that large “megathrust” earthquakes are a regular occurrence in the Pacific Northwest. In the case of the trees seen here in Sunset Bay, it appears to be unclear if earthquakes or more run-of-the-mill processes (such as coastal erosion) are the culprit.

These tilted rocks at Shore Acres State Park near North Bend have appeared in many a geology textbook! Shore Acres is home to one of the world’s most striking examples of what geologists call an “angular unconformity,” where flat-lying sedimentary rocks (visible in upper left) rest directly on top of older, tilted sedimentary rocks. The boundary between the flat rocks and the tilted rocks represents a large chunk of geologic time missing from the rock record. Several hundred years ago, geologists recognized angular unconformities as some of the first strong evidence of the Earth’s immense age, as they require multiple cycles of sediment deposition, burial, uplift, and erosion in order to form. 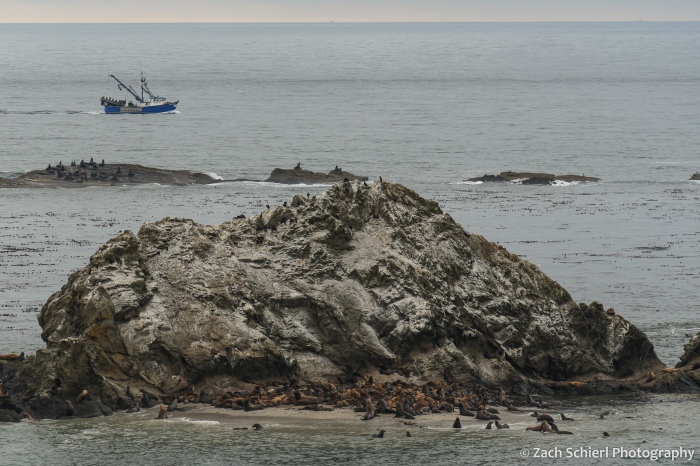 Sea lions and seals hauled out on Shell Rock near Simpson Reef. Interpretive signs at this overlook proclaimed that this is the largest haul-out site for sea lions on the Oregon Coast. 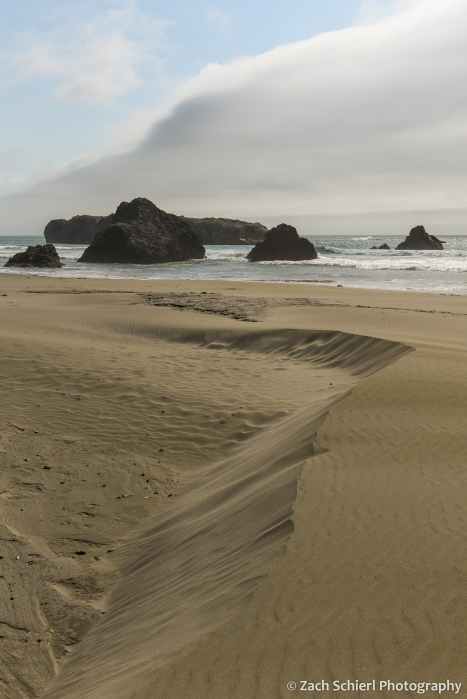 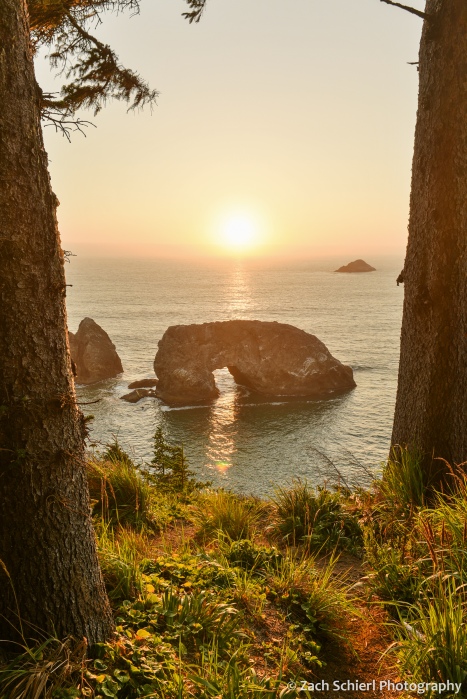 Sunset at Arch Rock, between Brookings and Gold Beach, Oregon 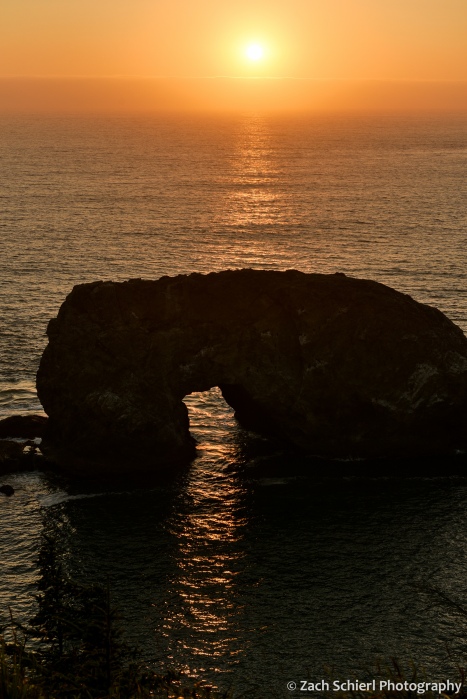 A closer view of Arch Rock. 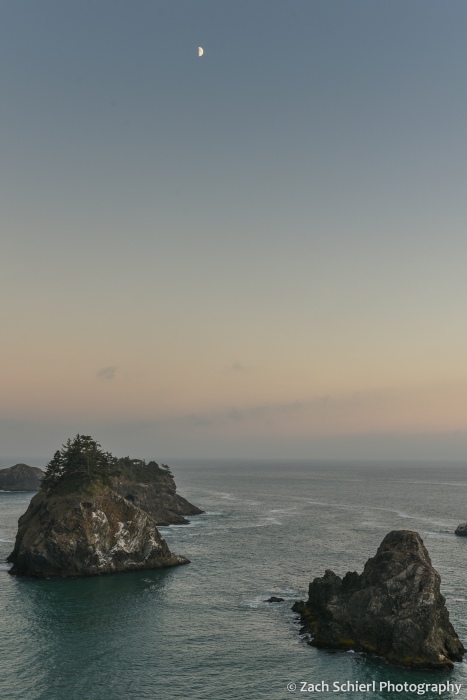 A late afternoon view of Lone Rock Beach and Twin Rocks from the Cape Ferrelo Viewpoint near Brookings, Oregon. 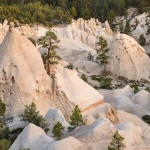 Tucked away at the terminus of a winding gravel road in the Dixie National Forest near the Utah/Nevada border, Pine Park would probably be a beloved national monument or state park were it located literally anywhere other than Southern Utah. We’ve been fortunate to come across quite a few places that fit this profile: stunning, unique, reasonably accessible, and—here’s the big one—empty. Places like Zion National Park may be bursting at the seams, but vast swaths of Southern Utah remain deliciously deserted. On a warm and beautiful weekend in early May, we had Pine Park pretty much all to ourselves! 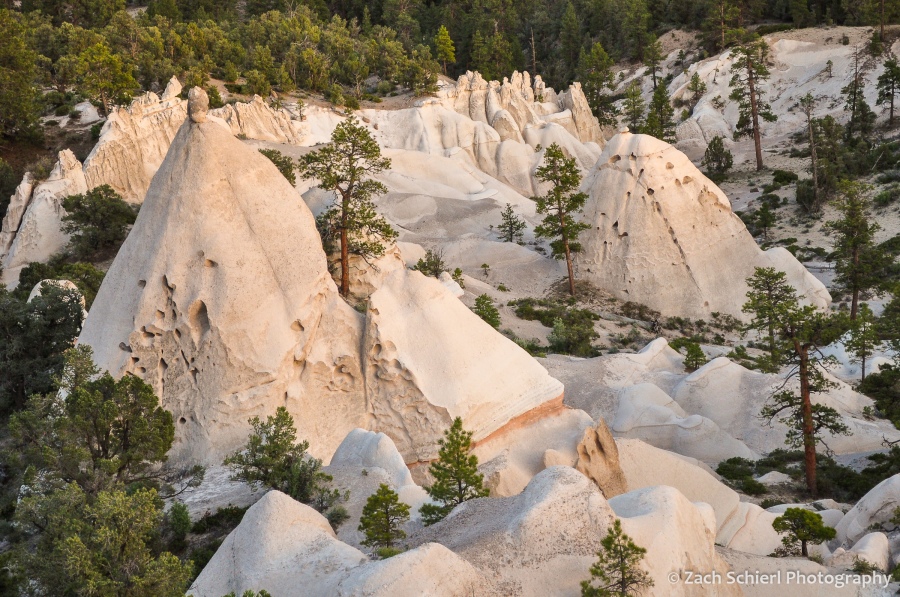 The main draw at Pine Park are the spectacular rock formations carved into the Tuff of Honeycomb Rock. Tuff is a deposit of consolidated volcanic ash combined with rock, mineral, and glass fragments that forms only in very explosive volcanic eruptions. Pine Park sits on the margin of some of the most voluminous and expansive deposits of tuff in the world. Collectively, the thousands of feet of tuff scattered across large swaths of Nevada and western Utah represent a time when, for lack of a better descriptor, all hell was breaking loose across what is now the Great Basin. The Tuff of Honeycomb Rock is just a hair under 12 million years old, and thus one of the youngest deposits from this intense and violent episode of volcanism.

While the backstory of the tuff is intriguing, the real allure is the wonderland of creamy white spires, domes, and hoodoos emerging from the otherwise nondescript juniper, ponderosa, and piñon pine forest. Weathering and erosion have sculpted a masterpiece at Pine Park. In many places, the architecture almost resembles Bryce Canyon, albeit whitewashed, and with no maintained trails (several Forest Service trails wind through this area, according to the official map, but we had difficulty following them for any more than a hundred yards past the trailhead) the many pockets of eroded tuff are truly a blast to explore. 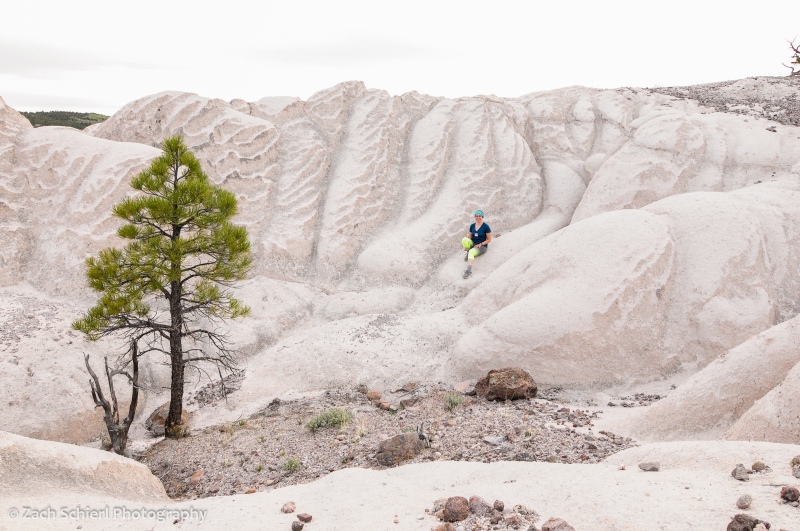 The Ponderosa’s don’t require much soil to gain a foothold in small depressions between ridges of tuff. 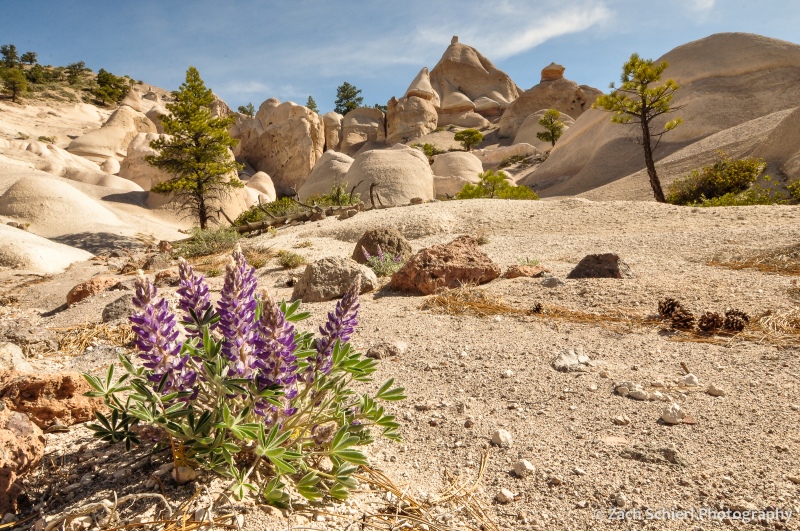 This species of lupine (Lupinus aridus?) seemed to love the gravelly, sandy soil produced by weathering of the tuff. 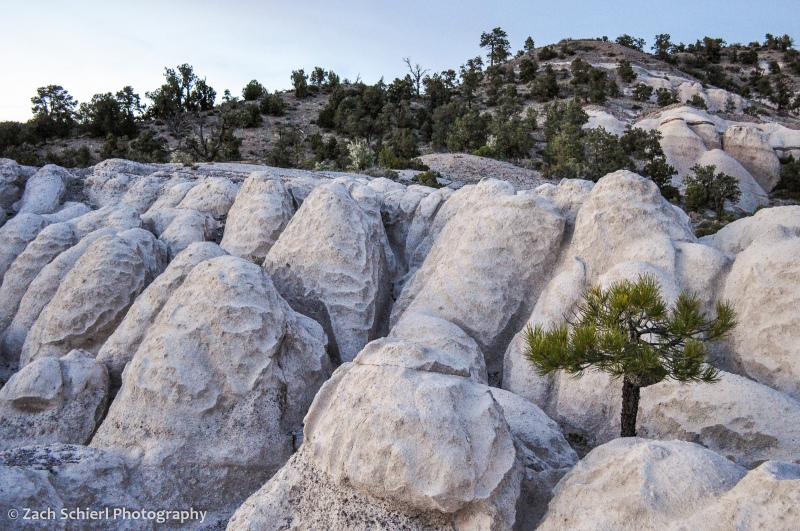 The tall, stately Ponderosas and a small stream give Pine Park a high-altitude feel, but in reality it sits at just 5700 feet above sea level, plenty low and warm enough for a plethora of wildflowers to be in full bloom during our visit: 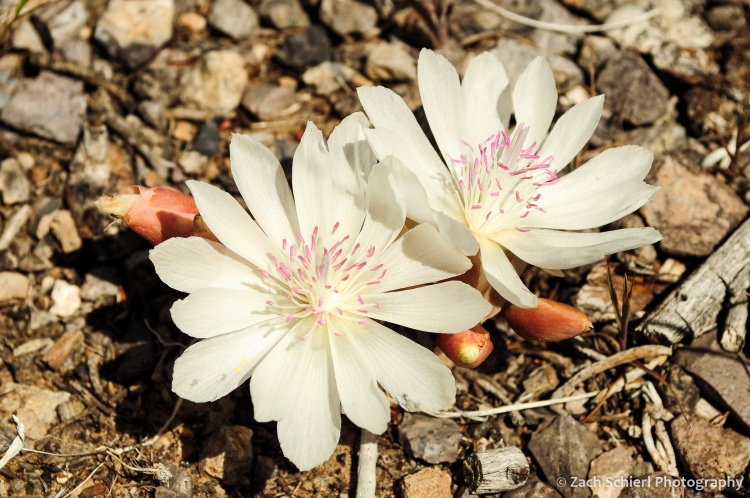 A claret cup cactus (Echinocereus triglochidiatus) in full bloom. I’m fully aware that the color appears somewhat enhanced on this photo, but it’s not; the claret cup flower really is that brilliant!

The lupines were everywhere. 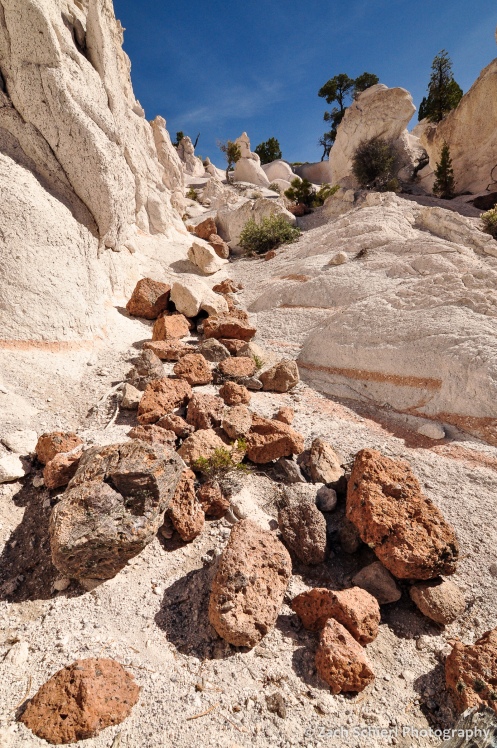 Multicolored boulders litter a chute in the Tuff of Honeycomb Rock.

Slots of Fun in Cottonwood Canyon 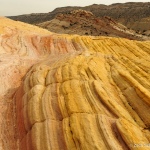 The 47 mile-long Cottonwood Canyon Road slices through some of the most otherworldly terrain in Southern Utah, connecting Highway 89 in the south with the Bryce Canyon region in the north. Mostly unpaved, some GPS devices have been known to lead travelers down this road in the name of a shortcut to Bryce Canyon National Park. When dry, Cottonwood Canyon makes for a wonderful scenic drive and is indeed a shortcut. But in the days following rain or snow, the layer of clay-rich shale the road follows for most of its length turns into a veritable morass, and renders the road impassible regardless of how many-wheel drive your vehicle might possess. Coming from the south, the road initially follows the broad valley of the Paria River drainage, before leaving the river behind and heading up the narrower valley of Cottonwood Creek. This portion of the road passes through Grand Staircase-Escalante National Monument; other sections used to as well before the monument experienced its recent “downsizing.”

We recently took a three-night camping trip to explore Cottonwood Canyon and some nearby areas. Our first stop was Yellow Rock, near the south end of the road about 13 miles from Hwy 89. Yellow Rock is a massive dome of Navajo Sandstone, easily visible from the road as is rises high above the jumble of rock layers alongside Cottonwood Creek. While the hike to its summit is not long, getting there requires a moderately-difficult scramble up a hidden rocky chute littered with loose boulders. Hiking poles/sticks highly recommended. After scrambling to the base of the rock, the real fun begins. After a few years living in Southern Utah, it is natural to assume that you’ve seen every color, pattern, and texture of sandstone that can possibly exist, but then Yellow Rock comes along and proves you wrong: 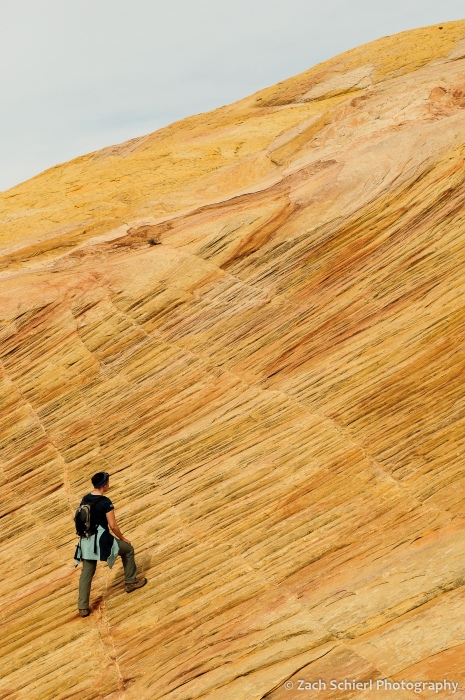 Walking up the east flank of Yellow Rock, enjoying the outdoor art gallery of beautiful colors, shapes, and patterns in the Navajo Sandstone. 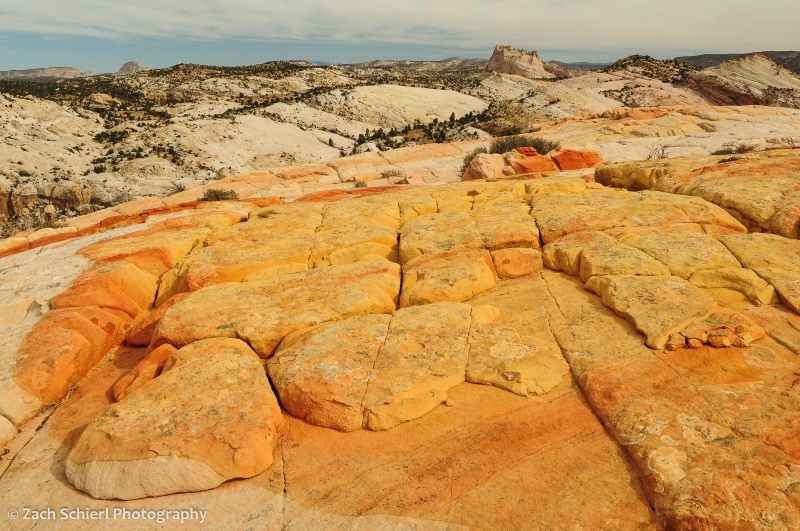 Colorful sandstone near the summit of Yellow Rock, looking north towards Hackberry Canyon.

While the abundant cottonwood trees lining the canyon bottom were still quite leafless, even in early April other signs of spring were beginning to show in this high desert. Traversing across Yellow Rock, we encountered many pockets of Desert Paintbrush, Anderson’s Buttercup, and Manzanita in sandy stream bottoms or in crevices in the sandstone, already in full bloom:

Desert Paintbrush (Castilleja chromosa) growing in deep sand. The flower of this showy plant is actually the inconspicuous green spike at right; the bright red parts are the bracts and sepals. 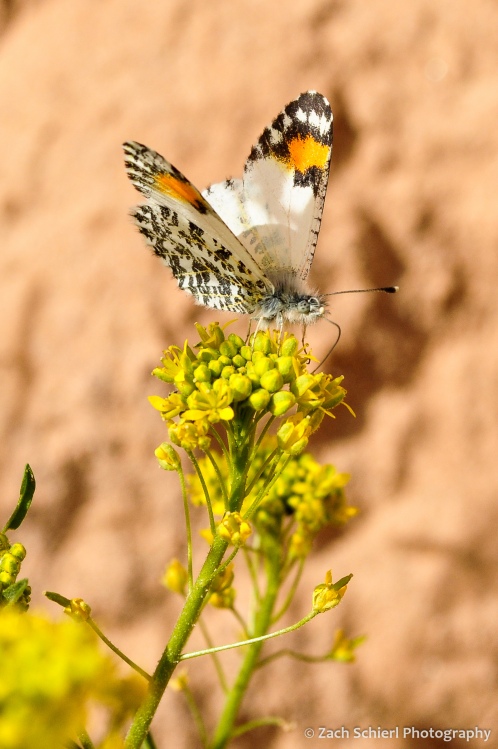 A orangetip butterfly enjoys the wild mustard buffet in the Cottonwood Canyon Narrows.

On our final night, we camped near the north end of the road, not far from Kodachrome Basin State Park, where we were treated to a spectacular sunset and even more stunning dark, moonless night skies:

Three landmarks of the winter night sky, Sirius (left), Orion (center, in flashlight beam), and the Pleiades (right) make their way towards the western horizon, where the bright band of the zodiacal light juts into the sky.

No Southern Utah camping trip would be complete without a saunter through a slot canyon, so on the way home in the morning, we made a quick detour to Willis Creek Canyon. At the beginning of our trip, we had briefly probed the famous Buckskin Gulch, just south of Cottonwood Canyon in Arizona, but were quickly turned back by waist-deep mud & debris pools that were emanating quite possibly the most foul stench to ever besmirch this Earth. In contrast, Willis Creek Canyon is a rare bird in Southern Utah; a beautifully sculpted slot with no technical obstacles to rappel over, and no putrid cesspools to wade through. Instead, a small babbling brook winds through the sandstone narrows, seemingly oblivious to its own high-quality handiwork: 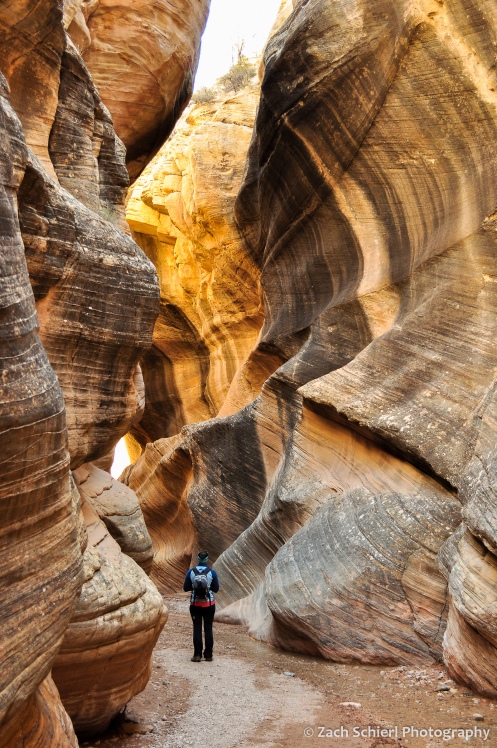 Approaching a wide portion of the canyon.

Back in the narrows!