Did you know that Monterey Jack cheese takes it’s name from the city where it was first made by Spanish settlers and then later first commercially marketed by a Scottish immigrant? Neither did I. That is, until I came across a lovely, if somewhat small and water-logged (and apparently created on a home inkjet printer…) interpretive sign informing me of that fact on a recent hike to the top of the peak that now bear’s Jacks’ name:

Located just outside of Monterey, CA, Jacks Peak is the highest point in Monterey County topping out at a whopping 1,068 feet above sea level.  The sign left me curious, and wanting to learn more about this mysterious Jacks fellow and his delicious cheese. After much additional research, I am now able to present you with the following information:

1. There is actually a fair bit of ongoing, spirited debate over who exactly should be credited with first making “Monterey jack” cheese. And Julius Caesar is involved…somehow.

2. According to the Monterey County Historical Society, Monterey jack is one of just four varieties of cheese to have been invented (created? first made? can one really “invent” cheese?) in the United States.  In other words, while the U.S. may be top dawg at spitting out fancy new electronic devices that start with a lower case “i”, we are seriously lacking when it comes to new innovation in the field of dairy products.

I probably could have kept this list going for a while but reading page after page about cheese made me hungry. Lacking any authentic Monterey jack, I instead “settled” for a large hunk of Tillamook aged medium white cheddar, a piece of cheese that was so tasty I seriously considering including a picture of it right after this period. In fact, I still am considering it.

Monterey is also famous for a number of other attractions, nearly all of which, sadly, have little or nothing to do with the cheese that so admirably and bears the city’s name. Most of them do, however, involve the ocean in some way or another which is a pretty good consolation prize if you ask me. 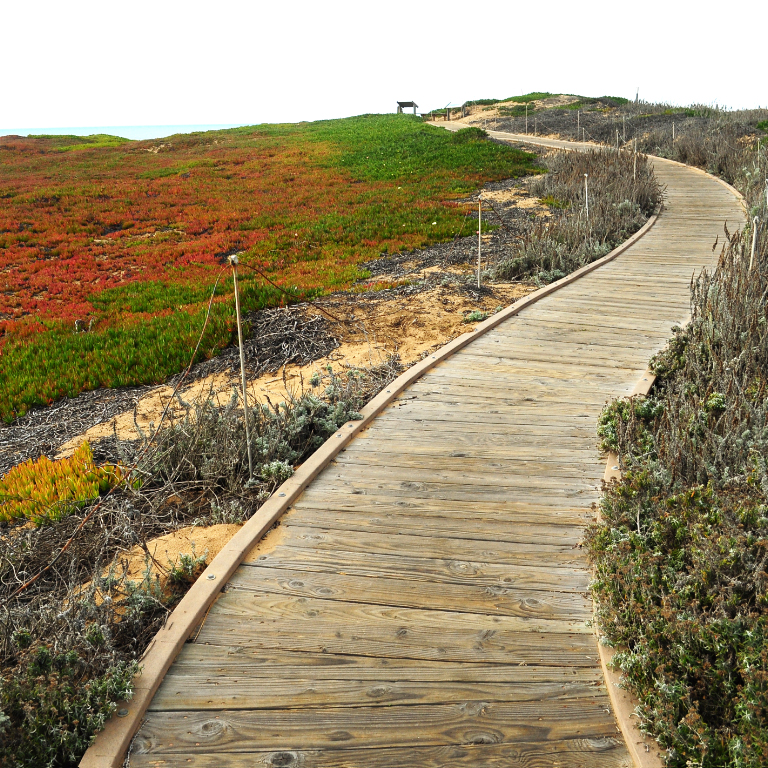 Fort Ord Dunes State Park is one of the newer such attractions. Not new in the sense that the beach or the dunes itself are new (they’re quite old actually) but new in the sense that the land it occupies was for many years part of the Fort Ord U.S. Army post. In 1994, the Fort was closed and since then much of the land has been reclaimed and opened to recreational use. Over 10,000 acres were set aside by President Obama as Fort Ord National Monument 2012.  A small strip of the beach and adjacent dunes just north of Monterey became Fort Ord Dunes State Park (pictured above) in 2009.

Clear on the other side of town is Point Lobos State Reserve, also part of the California State Park System.  The scenery at Point Lobos is breathtaking to put it mildly. In slightly more concrete terms, it was WELL worth the drive back into town to withdraw some cash so we could pay pay the cash-only $10 entry fee to the park. Now, you can also park on the highway and walk in for free but in my humble opinion, $10 is a small price to pay to keep one of the most spectacular stretches of coastline in the world preserved for all to see.  Like the nearby, and arguably more famous, 17-mile-drive and Pebble Beach area, the Point Lobos reserve protects rugged and rocky stretches of coastline, sheltered coves home to seals, sea lions, and sea otters, and one of the last remaining stands of Monterey cypress.  What you won’t find here though is multi-million dollar mansions and immaculately manicured golf courses dotting the coast which in my view improves the scenery to a level that is beyond my ability to communicate via words.

The hoards enjoy a beautiful winter sunset from Carmel Beach

Last but not least is Carmel Beach, located in the small hamlet of Carmel, which is distinctive in that it eschews street lamps and prohibits the wearing of shoes with heels higher than two inches.  It is also one of the few towns in the U.S. to forgo street numbers. While you mull on that for a bit, take note that Carmel Beach is oriented almost directly towards the late afternoon sun, making it an ideal location to spend the end of your day watching our local nuclear fusion reactor dip below the apparent horizon of the Earth (that’s a more astronomically correct way of saying “sunset”).  Note also that you won’t be alone. No matter though, just bring a blanket, a box of crackers, and some cheese and enjoy the show!

Sunset over the Great Sand Dunes. Note the sunlight catching the thin layer of sand being blown across the surface, no more than a few inches above the ground. Saltation in action!

I’ve been to my fair share of sand dunes; St. Anthony Dunes and Bruneau Dunes in Idaho, Oregon Dunes on the Pacific Coast, Coral Pink Sand Dunes in southern Utah, Juniper Dunes near Walla Walla, and a handful of dunes in New Zealand that I don’t remember how to pronounce much less spell.  By comparison though, the Great Sand Dunes in south-central Colorado truly deserve their title. In fact, one feels somewhat uncomfortable using the term “dune” due to its complete and total inability to convey the grandiose scale of this geological wonder. A weary traveler approaching them might be liable to exclaim “That’s no dune!” (if you didn’t catch that cleverly placed Star Wars pun, you should watch this short video clip immediately) upon the realization that these are no ordinary dunes.  No, they are perhaps better described as a small mountain range made of sand. When one first looks upon the dunes, it seems inconceivable that the entire massif could be made of sand. After slogging my way to their summit though, I assure you that they are.

Approaching the dunes from the south…Sangre de Cristo Mountains in the background.

Before beginning to ascend the dunes, one must first cross Medano Creek, a small stream originating in the Sangre de Cristo Mountains that flows between the mountains and the dunes. Due to the abnormally low snowfall in the Colorado mountains this past winter, by the time I visited in mid-June, this was a non-issue. The creek was only a few inches deep and therefore easily traversed.  Medano Creek is nevertheless just one of many features that makes the Great Sand Dunes stand out from their sand dune brethren around the world. The presence of a reasonably reliable water source along the base of the dunes creates a beach-like environment that, judging by the number of families with small children, is very conducive to building sand-castles.

Medano Creek meanders its way across the sand flats

The hike up to High Dune (which confusingly is NOT the highest dune; that title belongs to nearby Star Dune which is about 100 feet higher) is well-traveled yet there is no official trail so everyone ends up taking a slightly different route making it difficult to find footprint-free sand for good photographs. Hike past High Dune though and you are almost immediately alone in the midst of many, many square miles of untrodden, pristine, windblown sand. Anyone who has ever hiked up a sand dune before knows that you have to expend quite a bit of energy to extract your sinking foot from the sand after each step.  The somewhat demoralizing thing about hiking through sand dunes is that what takes you an hour to hike up, you can run down in less than a minute. Given that the running down part is thoroughly enjoyable; hiking the sand dunes is, in a way, analogous to waiting in line at Disneyland for two and half hours in order to go on Splash Mountain for two minutes. The analogy fails in that Splash Mountain doesn’t leave you picking sand out of every part of your body for the next three months and you don’t get an on-ride photo running down the sand dunes.  However, even hiking up the dunes, while difficult, is still a very enjoyable experience. 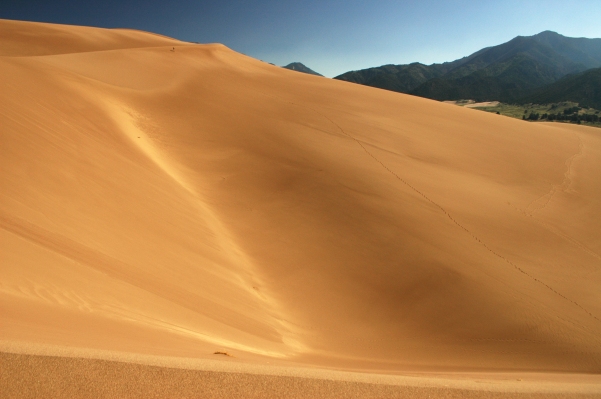 Wow, I’ve written three entire paragraphs without even MENTIONING geology yet!  This must stop now before they make me give my degree back. Anyhoo, most of the sand originates in the San Juan Mountains to the west, is transported to the edge of the vast San Luis Valley and then blown eastward by prevailing winds for many miles before the sand slams into the Sangre de Cristo Mountains and accumulates in a ginormous pile at their base. The color of the sand is a bit difficult to describe. During the day, it appears slightly off-white, cream, or ivory you might even say. However look at the sand closely and you’ll see that it consists of many orange to pink to yellow colored grains; colors which are brought out in all their glory at sunset.  In a few spots on my hike/run down the dunes, the innards of the dunes were visible, exposing the intricate bedding pattern that results from sand being blown up the shallow side of the dune and then cascading down the slipface. 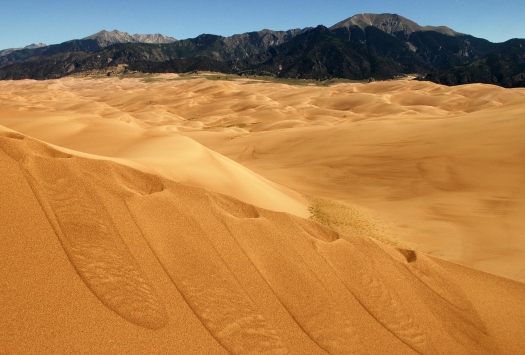 Sunset in the dunes was one of the most indescribable experiences I’ve ever…umm…experienced. Never mind that positioning yourself correctly on the dunes allows you to watch the sunset half a dozen times if you start at the top and slowly move your way downhill, the colors and patterns in the dunes brought out by the Sun setting through the smoke and haze in the western sky (much of it regrettably emanating from wildfires in New Mexico fires)  were spectacular. The low angle of the sun revealed the small-scale dunes that are ubiquitous yet nearly invisible in the harsh mid-day lighting (see photo at top of page).

Looking north towards the Sangre de Cristo Mountains at sunset.

Walking along the dune crests at sunset.

Since this has already ballooned to one of my longer entries, let’s go ahead and make this Part 1 of 2. The dunes are just one of many attractions in the San Luis Valley/Sangre de Cristo region. The other attractions that I will detail soon may or may not include an alligator farm…

And that my friends, is called a “cliffhanger.”