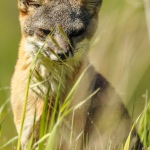 Just a few dozen miles off the coast of Southern California lie the Channel Islands, eight motes of land jutting out of the sea a stone’s throw from the hustle and bustle of the Los Angeles metropolitan area. Of the eight islands, the only one with a significant human population is the tourist mecca of Santa Catalina, which draws over one million visitors per year. The remaining seven islands are sparsely populated and draw far fewer tourists. The four northernmost islands form an archipelago that is protected by Channel Islands National Park and the Nature Conservancy.

Back in March, we briefly visited the largest Channel Island: Santa Cruz. At 97 square miles in area, Santa Cruz is reached via ferry from Ventura or Oxnard. Our hour-long journey across the Santa Barbara Channel was choppy to say the least, but included close up views of Pacific white-sided dolphins and several majestic oil drilling platforms. Upon arrival, we were greeted by one of the most lush landscapes imaginable. Abnormally abundant winter rains had produced a tall, dense carpet of green grasses that blanketed the entire island. One of the resident rangers told us it was the greenest he had seen Santa Cruz in the seven years he’d worked there. 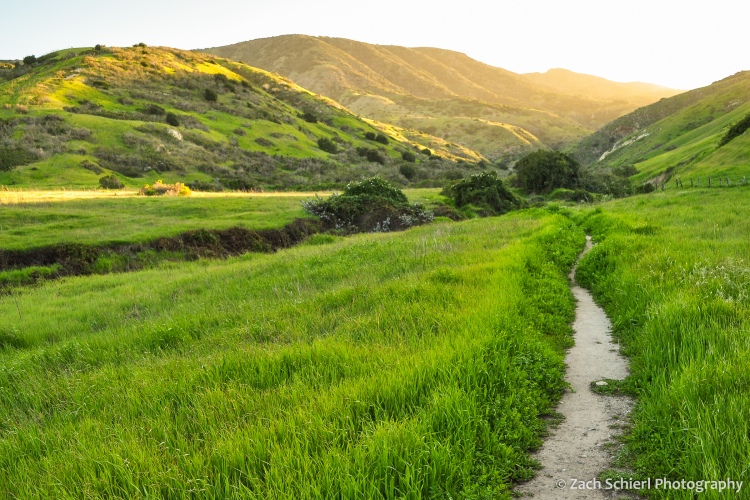 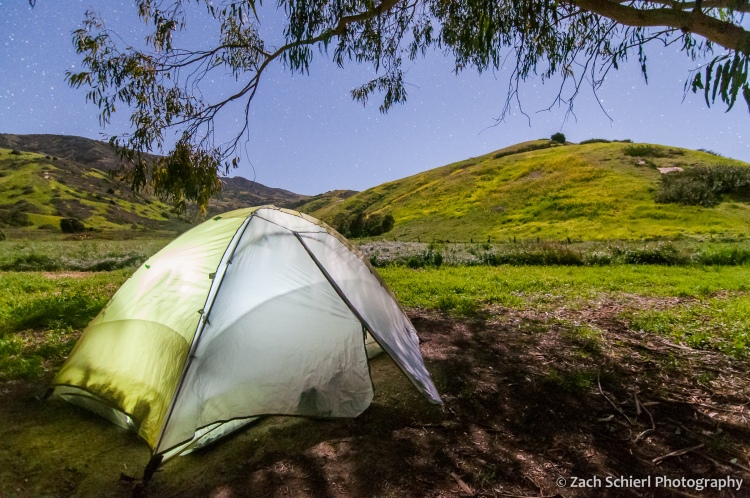 Given their relative geographic isolation, the Channel Islands are notable for their high concentration of endemic plant and animal species found nowhere else on Earth. They are also home to some of the earliest evidence of human habitation in the Americas. Archaeological and geological evidence suggests that humans inhabited Santa Rosa, just east of Santa Cruz, as far back as 13,000 years ago. At this time, sea levels were much lower due to the massive amounts of water locked up in glaciers and ice sheets farther north. As a result, the four northernmost islands (Anacapa, Santa Cruz, Santa Rosa, and San Miguel) were united into a “mega island” whose eastern edge was much closer to mainland California. This made it easier for plants and animals to reach the island, either by air (birds, plant seeds, etc.) or on floating rafts of debris (mammals, reptiles, etc.) Some species may have even been deliberately brought to the islands by humans.

As the most recent glaciation ended, sea levels began to rise, eventually splitting the mega-island into the smaller landmasses that exist today. Once isolated, the plant and animal populations that had established themselves on the islands, either organically or after being brought there by humans, began to evolve into species distinct from their mainland cousins. In some cases, distinct subspecies have evolved on individual islands in response to unique conditions. 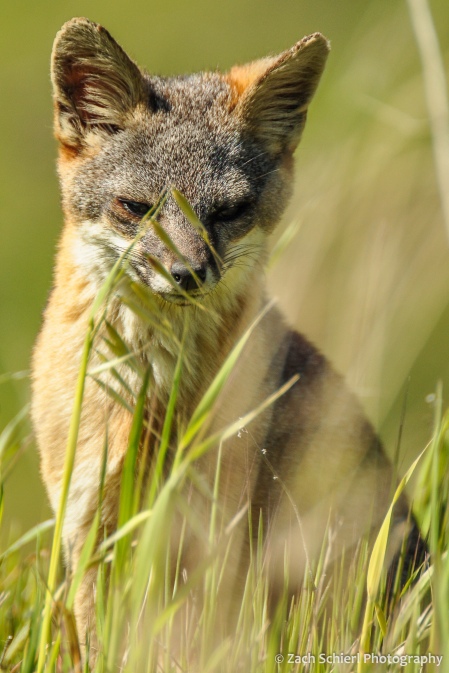 For visitors to Santa Cruz, the most obvious example of this phenomenon is the ubiquitous Santa Cruz island fox (Urocyon littoralis var. santacruzae). Coming from the mainland where a sighting (especially a daytime sighting) of a fox is a rare treat, we were surprised to see one within minutes of getting off the ferry. The island fox is descended from and appears very similar to the common grey fox, but is much smaller. A fully grown island fox weighs just 4-5 pounds, and is similar in size to a large house cat. Often the lush spring grasses exceeded the foxes in height, making them challenging to spot! Nearly extinct in the early 1990s, a highly successful habitat restoration and captive breeding program has the species thriving today. We ended up seeing several dozen in our short visit to Santa Cruz. Other subspecies of the island fox exist on five of the other seven islands, each with slight differences evolved in response to local conditions.

An island fox lurking in the tall grass

An island fox on the trail to Smugglers Cove, likely hoping for a food handout.

With its pastoral landscape and unique wildlife, Santa Cruz feels a world away from metropolitan areas of Southern California. However, nightfall brought a stark reminder of just how close the islands are to the urban sprawl. Light pollution from Los Angeles, Oxnard, Ventura, Santa Barbara, and the numerous oil drilling platforms in the Santa Barbara Channel dominated the night sky from Santa Cruz.

Nighttime panorama from the cliffs above Scorpion Ranch on Santa Cruz Island. See annotated image below for a description of the different features.

Our return trip was delayed because the choppy seas prevented the ferry from reaching the anchorage on Santa Cruz on time, giving us a few extra hours to sit on the beach and enjoy the peace & quiet of the island. The winds died down enough for a smooth ride back across the channel where we even spotted a couple of migrating gray whales. Apparently I need more practice shooting photos from a moving platform, as the whale pics all turned out pretty blurry. Have another fox instead! 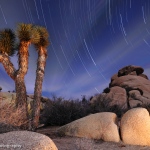 Driving across the southwestern United States, one could be forgiven for thinking that all deserts are the same. However, differences in elevation, temperature, topography, and precipitation make them distinct in ways that are often hard to comprehend from a fast-moving car.

For all their differences though, both the subtle and the striking, the Mojave and Sonoran Deserts share one thing in common; the most visible symbol of each is a large, majestic, and photogenic plant perfectly suited for the harsh conditions in which it evolved to inhabit. 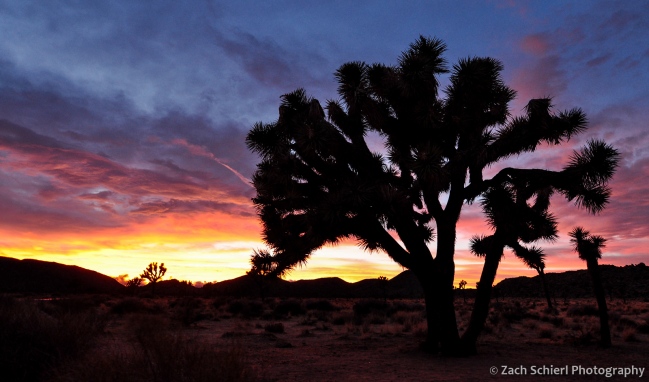 For the Mojave Desert, that plant is the Joshua tree (Yucca brevifolia). Not actually a tree but rather, as the scientific name betrays, a species of Yucca, early settlers bestowed the befuddling name upon this plant after noticing that the contorted arms resembled the prophet Joshua raising his arms to the sky in prayer.

Today, the Joshua tree is considered an indicator species for the Mojave Desert, as many other inhabitants of the Mojave (two-legged, four-legged, and winged alike) depend on it for survival. The Joshua tree grows through portions of western Arizona, southeastern California, and southern Nevada, but some of the largest and healthiest stands are protected within the boundaries of Joshua Tree National Park and Mojave National Preserve.

A nearly full moon hovers over a Joshua tree at sunset

For the Sonoran Desert, the symbolic plant is the saguaro cactus (Carnegiea gigantea). Despite the nearly ubiquitous use of the saguaro as a symbol of the American Southwest, this excruciatingly slow growing cactus actually only grows in a small portion of the Sonoran Desert extending from extreme northwestern Mexico into south-central Arizona. 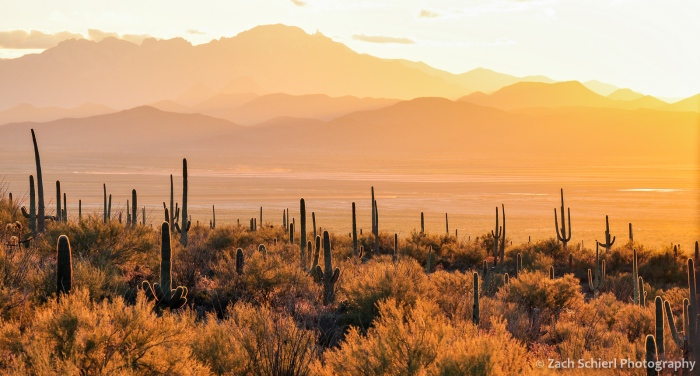 Sunset from the Gould Mine Trail in Saguaro National Park. On the horizon is Kitt Peak, home to one of the largest astronomical observatories in the United States

Like the Joshua tree in the Mojave, the saguaro is an integral part of the Sonoran Desert ecosystem. Birds such as the Gila woodpecker nest within the flesh of the cactus while the fruits and flowers provide a source of food for many other species, including humans. When the end finally comes for a saguaro (which can take well over 100 years), the flesh rots away to reveal an internal structure consisting of a series of wooden ribs, which often remain standing long after the saguaro dies:

A young saguaro mimics a neighbor who has seen better days

Both the saguaro and Joshua tree face serious threats; in the long term from a climate that may change faster than they are able to migrate, and in the short term from a loss of habitat due to rapidly ballooning human populations in the desert regions that these giants inhabit.

Into the Valley of Death (Part 3): Canyon Combing

“Canyon of Color”: A walk through lower Gower Gulch reveals rocks in nearly every color of the spectrum

No tour of Death Valley would be complete without a peek into the myriad of mysterious canyons that slice abruptly into the mountain ranges surrounding the valley. When rain does bless Death Valley, it often arrives quickly and in large quantities, which can quickly turn a storm from a blessing into a nightmare. With little soil and few plants to soak up the water, most precipitation ends up rapidly draining into creeks and streams. Canyons that are bone dry 99% of the year can almost instantaneously find themselves channeling deadly flash floods, mudflows, and debris flows. Each time this happens, the canyons get slightly deeper (and the mountains slightly smaller) as the water picks up and transports bits of rock down to the valley floor where it dumps them in large piles known as alluvial fans. If the mountains weren’t continually being uplifted by tectonic forces (which most of the ranges in Death Valley are), this process would quickly erase the mountains from the landscape.

In October 2015 (just a few months before our visit), portions of Death Valley received several inches of rain in just a few hours, a nearly unprecedented storm for such a dry environment. Many roads were damaged or wiped out completely by floods and debris flows and portions of the park remained closed even several months later.

One of the most interesting canyons in Death Valley is Gower Gulch, located just south of Furnace Creek. Until recently, Gower Gulch was a small, run-of-the-mill canyon carved into the soft, buff-colored badlands of the Furnace Creek Formation. Things took a dramatic turn in the 1940s when the waters of the nearby (and much larger) Furnace Creek Wash were deliberately diverted into Gower Gulch in an attempt to prevent them from flooding populated areas downstream. With the drainage area of Gower Gulch enlarged by over 16,000%, periodic floods began to incise Gower Gulch at an alarming rate. The Gulch has deepened by more than 20 feet in just the last several decades, an erosion rate nearly unheard of in the geological world. The rapid erosion rate has caused some unintended consequences to overlooks, roads, and other park infrastructure but has simultaneously provided geologists with a fascinating window into what happens when you make a stream too big for its own britches.

Gower Gulch had experience once of these erosive floods just a few months prior to our visit. The lower walls of the canyon were still coated in a thin layer of tan mud left behind by the October 2015 floods. In many cases, the mud line was 10-15 feet high. Little imagination was needed to realize that Gower Gulch would be a terrifying place to be during such an event!

An hour north of Gower Gulch is Mosaic Canyon. Cut into the Panamint Mountains the rise to the west of Death Valley, Mosaic Canyon also experiences mudflows and debris flows during intense rains. The bedrock of the canyon is ancient dolomites, limestones, and marbles; in many places, these rocks have been polished to a shine by floodwaters roaring through the canyon.

The highlight and namesake of the canyon though are the spectacular deposits of breccia (a sedimentary rock made of coarse-grained, angular rock chunks cemented together by a finer-grained matrix) that have been pasted onto the canyon walls by repeated debris flows. The high carbonate content of the rocks allows percolating water to quickly cement the debris flow deposits together into a solid layer that can adhere to the canyon walls. The fragments of rock within the breccia are a representative sample of those that comprise the Panamint Mountains, and thus vary widely in color making the breccia appear like a complex fresco created by a powerful force of nature.

Mosaic Canyon gets its name from the colorful breccias that coat much of the canyon wall. 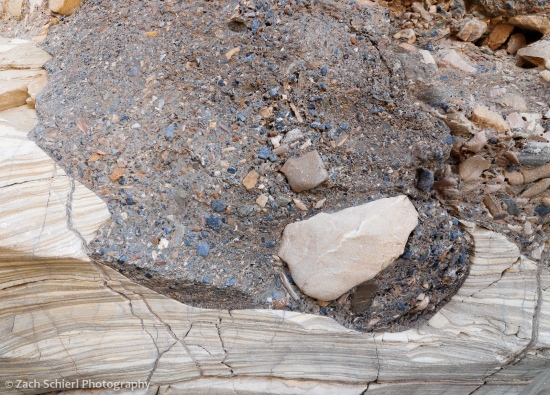 One can hike up Mosaic Canyon (some moderate scrambling required) for about a mile and a half, admiring the rock formations, before coming to a ~50 high cliff (a waterfall during wet periods) that inhibits further upstream travel. Hiking up Mosaic Canyon is truly spectacular, each bend reveals a new assortment of geological treasures, only some of which are pictured here. 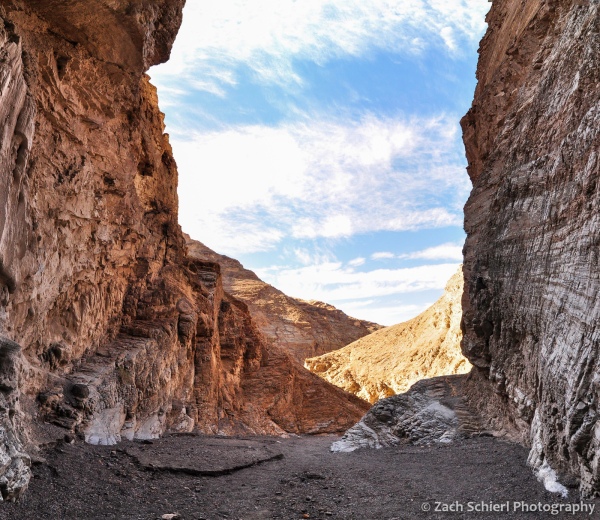 A hike up Mosaic Canyon ends here unless you have a rope; behind me is a 50′ dry waterfall 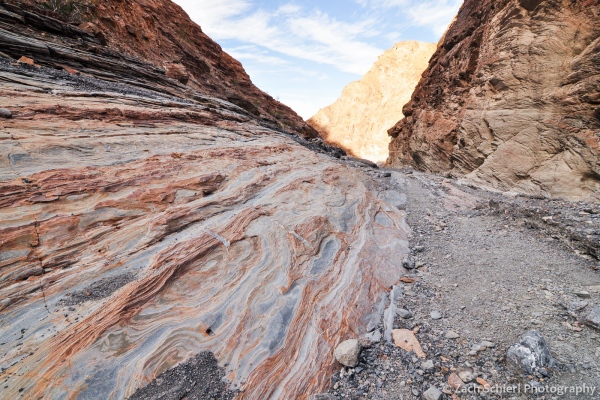 The character of Mosaic Canyon change with every bend!