A tidepool filled with giant green anemones (Anthopleura xanthogrammica) along the coast of Washington in Olympic National Park.

Living in the desert of central Washington, it can be easy to forget that we live in a state with over 3,000 miles of coastline. While the high volcanic peaks of the Cascades are visible from our backyard (and thus remind us of their presence daily), the damp shores of the Pacific remain out of sight and out of mind most of the time.

Our most recent summer trip took us all the way to Washington’s western edge for a short backpacking trip along the coast in Olympic National Park. Coastal backpacking comes with a few unique challenges. For starters, predicting the weather along the coast is notoriously difficult, in part due to the relative lack of surface weather observations over the eastern Pacific and Gulf of Alaska, where most of our storm systems approach from. This fact ended up rearing its head on the final night of our trip.

Perhaps even more importantly, safe coastal backpacking requires that you know how to read a tide chart. The Washington coast experiences a fairly large tidal range, up to 10-12 feet during certain parts of the month. That’s enough to make vast sandy beaches completely disappear. A successful trip requires acute awareness of the timing and magnitude of the twice-daily high and low tides. The coast features many headlands (rocky outcroppings that jut out into the sea, often without any sort of “beach” whatsoever) that can only be traversed when the tide is below a certain level. Getting the timing wrong can (at best) result in having to sit on the beach for hours waiting for the tide to go out or (at worst) getting trapped in a dangerous situation as the tide rises and cuts off your escape route.

As this would be our first coastal backpacking trip, we obtained a permit for a fairly short and straightforward route beginning at Rialto Beach, heading north past the famous Hole-in-the-Wall, and eventually camping for two nights on the beach near the Chilean Memorial, the site of a shipwreck that killed 18 sailors all the way back in 1920. The terrain along this section of the coast was quite variable, ranging from long stretches of soft, sandy beach, to the slightly more annoying cobble and pebble beaches, to large boulder fields and headlands that were somewhat difficult to navigate with a heavy backpack: 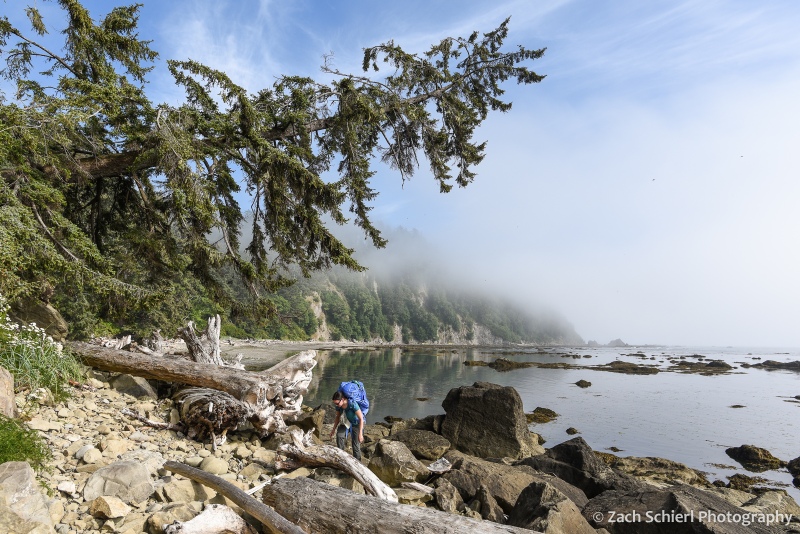 Picking our way along the rocky Olympic coast en route to our campsite at Chilean Memorial.

Tilted layers of sediment have been planed off by wave action near Hole-in-the-Wall, Olympic National Park, Washington.

Cape Johnson, Olympic National Park, Washington. With not much beach to speak of, this is a great example of a spot where being aware of the tide situation is essential!

After a little more than four miles of hiking, we arrived at the small, unnamed cove home to the Chilean Memorial and found a campsite just above the high-tide line among large pieces of driftwood. This sheltered cove made for a relatively quiet and peaceful camp, as the myriad rocks and sea stacks just offshore caught the brunt of the surf, limiting the amount of wave action reaching the beach. We enjoyed watching the landscape of the cove change over the next few days as the mist and tides repeatedly swallowed up and revealed the sea stacks and small rocky islands. We quickly discovered that the largest sea stack (pictured below) was connected to the mainland via a rocky isthmus at low tide, and ended up hiking out to it one evening to look back on our campsite. 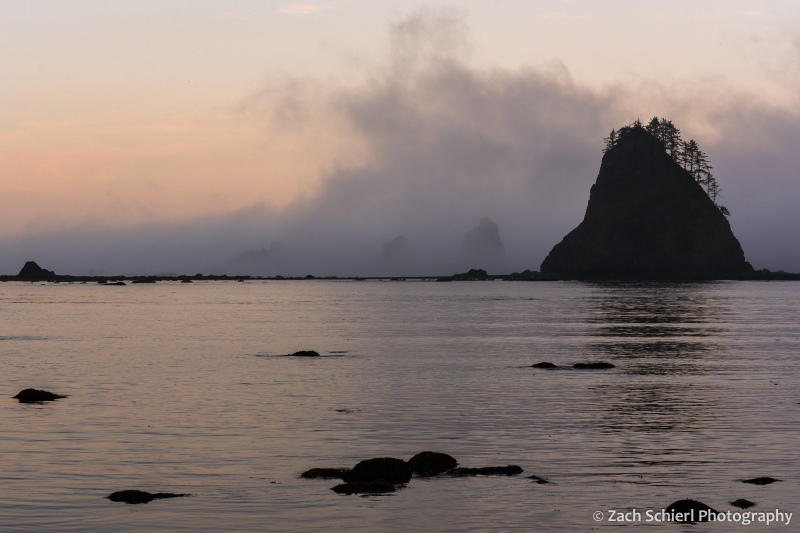 View out into the Pacific Ocean at sunset from our campsite on the Chilean Memorial beach in Olympic National Park, Washington 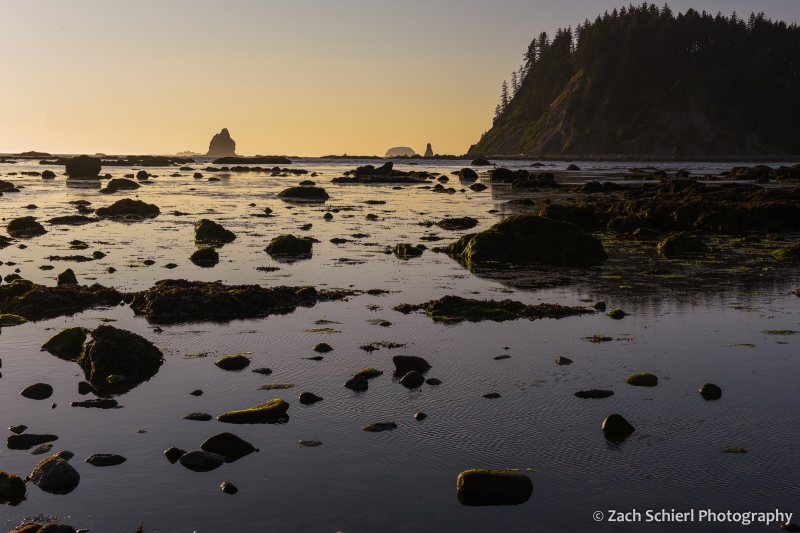 Looking back toward the Chilean Memorial beach and Cape Johnson from the base of the large sea stack in the previous photo.

While we had our fair share of clouds and mist, it did clear up enough on one evening to reveal the night sky. The moon was just past full, so the Milky Way was only barely visible, but it was still fun to see the southern stars rise and set over the Pacific: 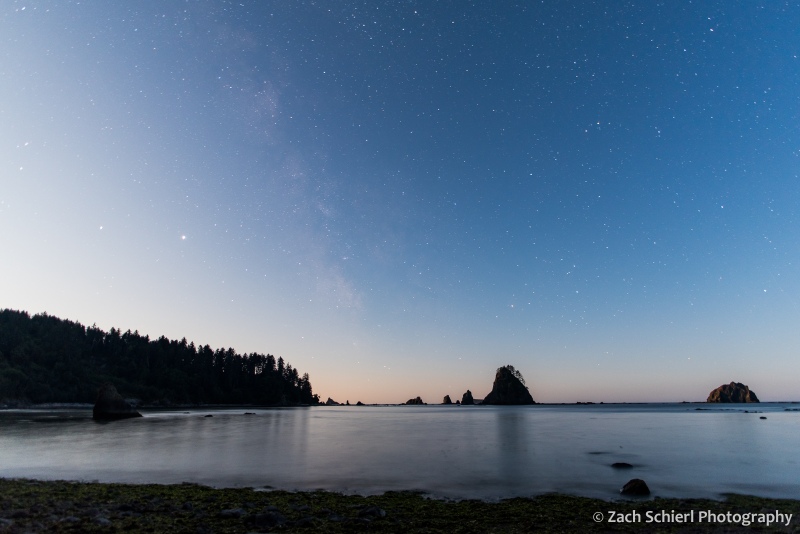 A faint hint of the Milky Way reveals itself despite the light cast by the rising moon (just behind the trees at left).

Enjoying a driftwood campfire on the beach.

Our trip came just a few days after the full moon, meaning that the low tides were some of the lowest of the month. These so-called “negative tides” are the best for exploring tide pools along the coast, as they reveal a greater variety of sea squishies: 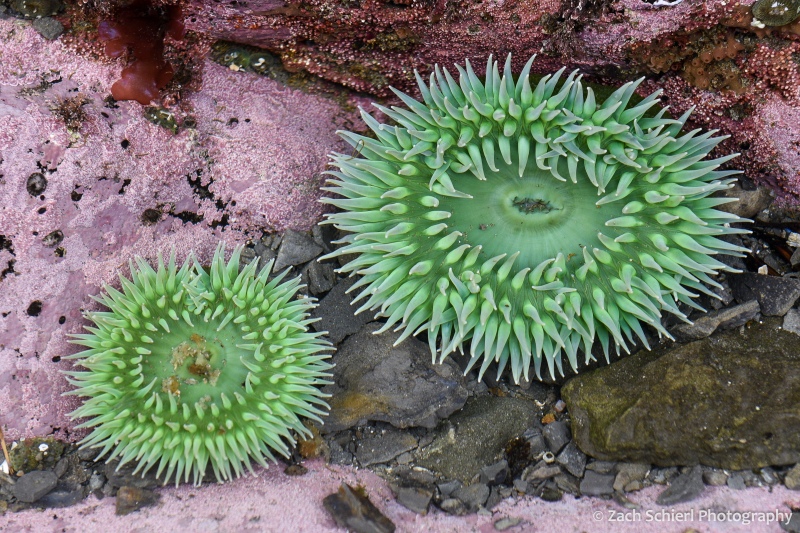 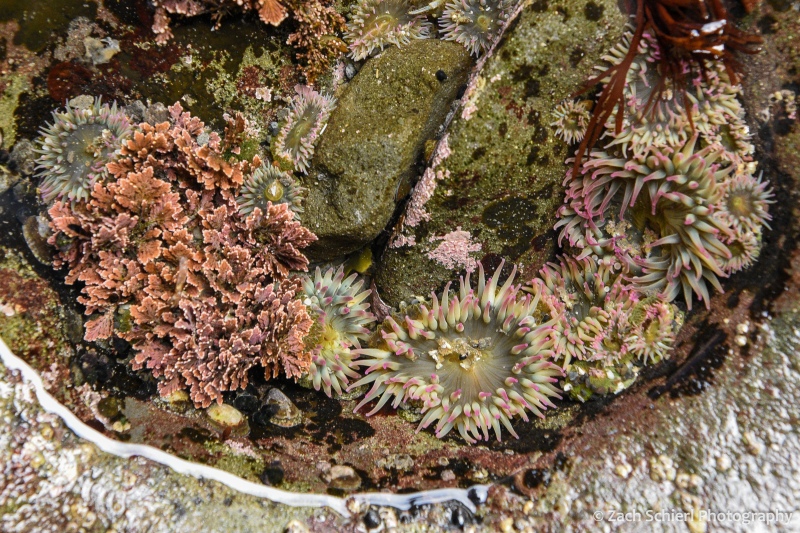 A tidepool filled with giant green anemones along the coast of Washington in Olympic National Park.

In addition to the living tidepool organisms, we also observed large quantities of dead jellyfish (at least three different species) washed up on the beaches, including several massive (~2 foot wide) lion’s mane jellies:

A deceased (?) lion’s mane jellyfish (Cyanea capillata) washed up on the beach in Olympic National Park, one of many, many such jellies we found on our trip.

For our third and final night, the original plan was to hike most of the way back to the car and camp along Rialto Beach near Hole-in-the-Wall. Prior to departure, the weather forecast for this night had called for a fairly robust storm coming in off the Pacific. With an ailing tent that has become somewhat more, shall we say, permeable than one would desire, we briefly debated whether to just call it quits to avoid the chance of getting soaked. Surprisingly, we were able to get enough cell service on the beach to check an updated weather forecast, which showed a drastically reduced chance of rain and little precipitation expected. Consequently, we decided to stick with the original plan and set up camp in the trees at the north end of Rialto Beach. Our decision to stay was quickly validated as we observed a number of whales spouting and breaching throughout the afternoon just offshore. 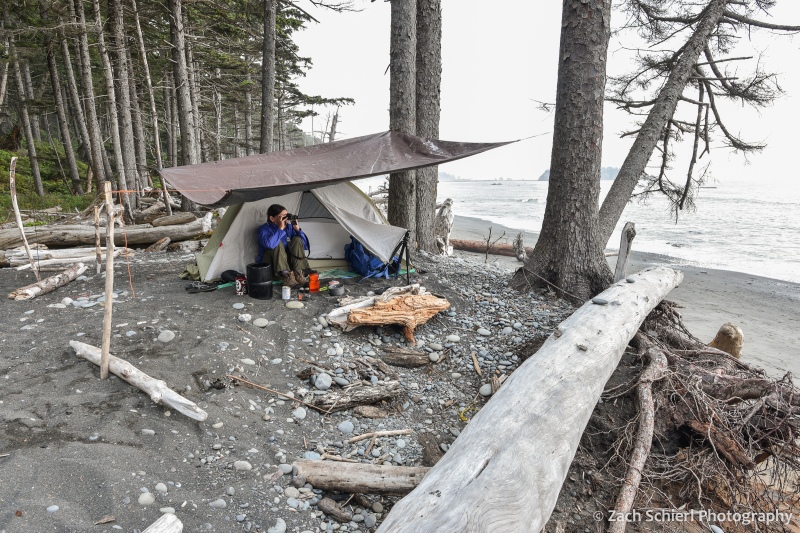 Our final campsite along Rialto Beach. From this vantage point, we saw a number of whales (likely humpbacks) spouting and breaching off-shore throughout the afternoon and evening.

12 hours later, at 3 AM, when I was emerging from the tent for the third time to re-secure our tarp and shelter in the face of driving rain, wind, and large, deafening waves crashing up against the bluff just a few feet from our tent, I wasn’t so sure. A great example of the fickle coastal weather I suppose, and a good character building experience as Calvin’s dad would say.

While intense, the storm was brief, and by morning the skies were clearing, making for a pleasant stroll down Rialto Beach back to the car. All in all, the trip was a refreshing change of scenery from our predominantly mountain-based adventures the rest of the summer! 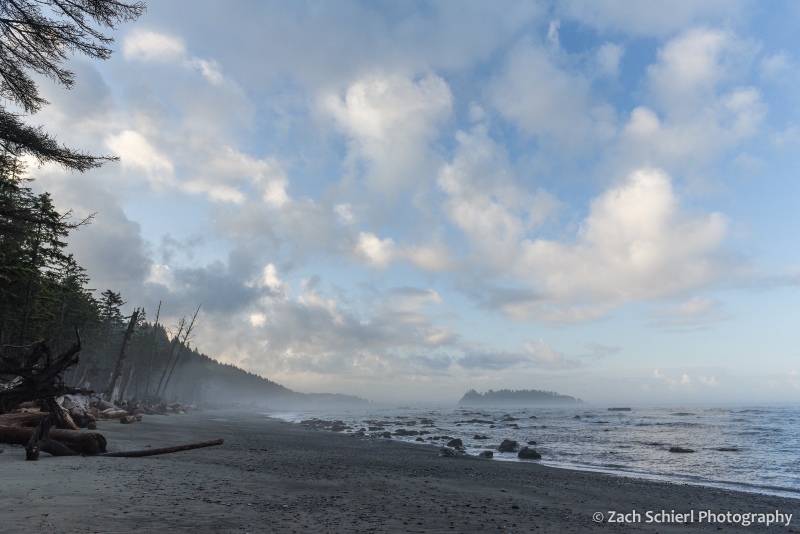 Benign clouds greeted us in the wake of the storm for our short hike out to the car on the final morning.