Sunset to Sunrise at Bryce Canyon 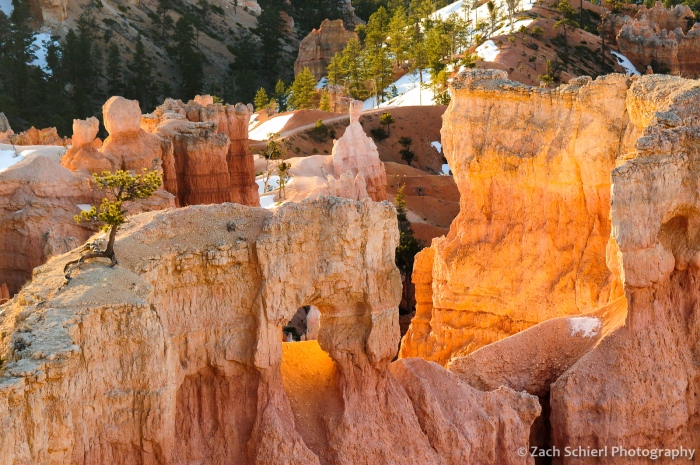 Sunset, nighttime, and sunrise are probably the three most exciting times for photography, and I got to hit all three on a quick trip to Bryce Canyon National Park this past weekend. I experienced a brilliant sunset, hiked into the Bryce amphitheater by moonlight, joined the masses for sunrise, and was back in my own home less than 24 hours after walking out the front door. I feel incredibly lucky to live close enough to such wonders that trips like this are possible. This impromptu trip was facilitated by the unseasonable heat wave currently gripping Southern Utah. On Sunday night, the overnight low at Bryce barely dropped below freezing (about 15 degrees above average for this time of year) making a quick camping trip a reasonable proposition.

This was actually my first trip to Bryce Canyon in the winter months. While snow has made itself scarce in Southern Utah the last few weeks, and most of the snow had melted away from the hoodoos, there was still quite a bit of the white stuff left on the north facing slopes, making for a gorgeous complement to the ruddy hoodoo hues.

Before hitting the trail for sunset, I took time to drive out to some of the overlooks at the south end of the park. Bryce Canyon may be known for hoodoo hiking, but south of the main amphitheater lie some truly mind-blowing views of the Grand Staircase and Colorado Plateau. The Paunsaugunt Plateau on which Bryce Canyon sits rises to elevations of more than 9,000 feet, allowing commanding views of the surrounding terrain. I truly believe that the view from Yovimpa Point is one of the best on the planet (albeit difficult to photograph), with a viewshed stretching from the North Rim of the Grand Canyon, to Navajo Mountain and Lake Powell near Page, to the 11,000 monolith of Powell Point and the Aquarius Plateau.

Looking east from Farview Point. Note how all the snow has melted from the south facing slopes, but much remains on the north aspects

As the sun dropped lower, I headed out on the trail to Tower Bridge. In hindsight I should have taken a picture of the mud, but I guess I was too preoccupied trying not to lose a boot to the bright orange morass. With winter freeze/thaw cycles still in full swing, the trails were all littered with fragments of rock fallen from the cliffs and hoodoos above, a good reminder of the primary process responsible for creating this unique landscape. 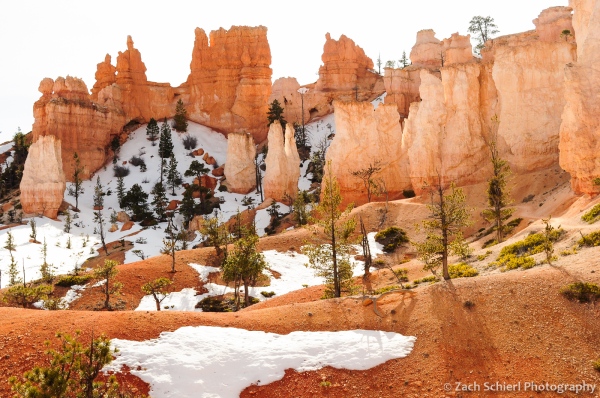 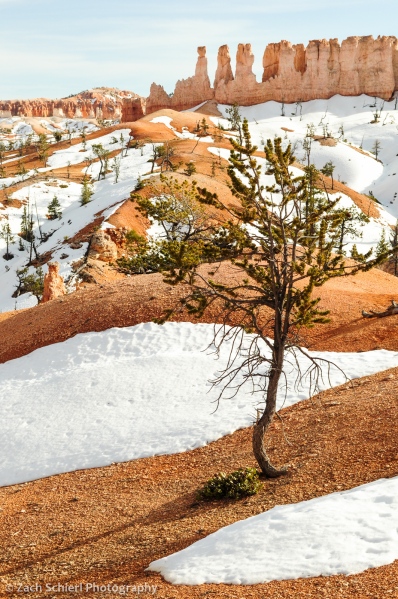 A classic Bryce view at sunset: looking northeast towards Powell Point (10,188′) and the Aquarius Plateau

The full moon rising over Powell Point and the Sinking Ship

My visit happened to coincide with a full moon so Milky Way photographs were out of the question. The light made it quite easy to navigate the trails looking for interesting photo opportunities. In several hours of wandering around the amphitheater, I don’t think I turned my headlamp on once. It was seriously bright out there. 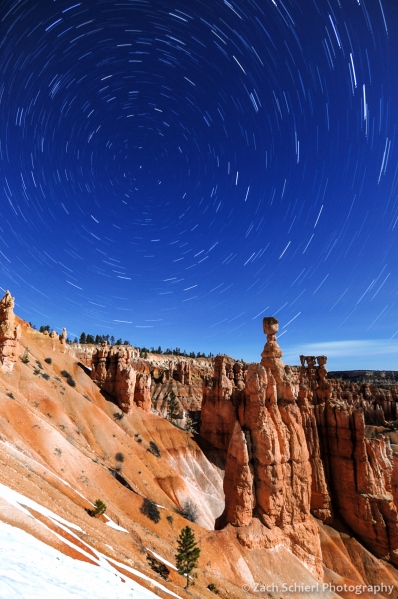 With the photo above, I was hoping for longer star trails but after just half an hour, my camera battery died. After scrambling to replace it, I discovered that someone (who shall remain unnamed…) had forgotten to charge their spare camera battery. With only enough power on the spare for a few dozen more exposures, I decided to pack it in for the evening rather than continuing with the star trials, and save my remaining juice for sunrise…which turned out to be a good call.

While Bryce is beautiful at any time of day, sunrise is truly the golden hour. Because most of the amphitheater faces east, sunlight creates so many interesting light patterns among the hoodoos that one almost can’t decide where to look. This was the 2nd morning since the switch to daylight savings, and the crowds reflected the fact that sunrise was now at a quite palatable 7:30 AM.

The crowds assemble for sunrise at Bryce Canyon National Park

Some photos from a week exploring southern Utah, Bryce Canyon, and the Grand Staircase:

Horseshoe Bend of the Colorado River. 4-shot panorama. Given that it was about 110 when I took this, I can't even describe how appealing that water looked...

Toadstool. Yours truly for scale.

Toadstool close-up. Basically the orange sandstone of the Entrada Formation (same stuff that forms the famous spans of Arches National Park) is easily erodible but portions get protected by boulders of the harder and more resistant Dakota Sandstone that originate in the cliffs above.