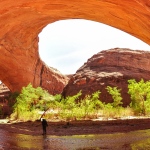 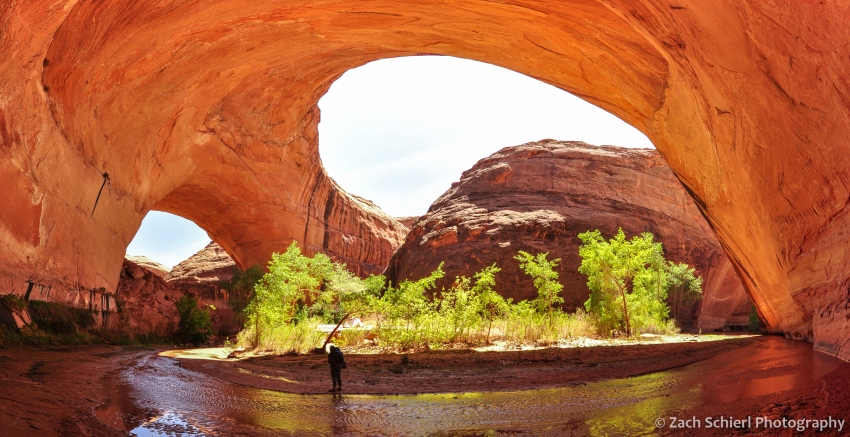 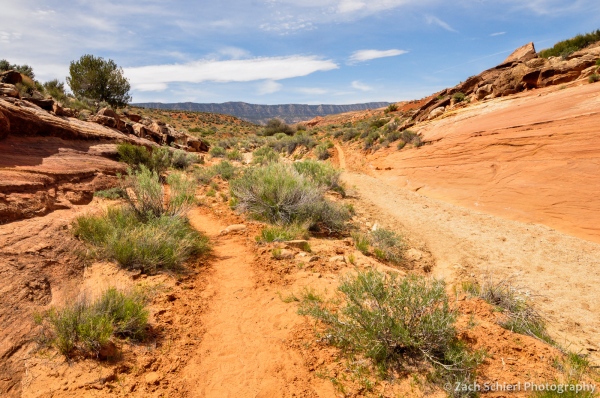 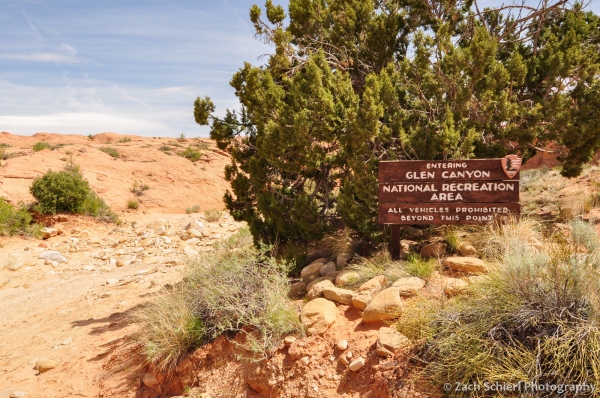 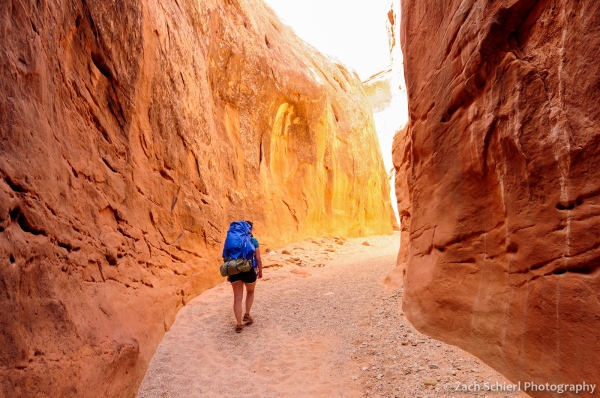 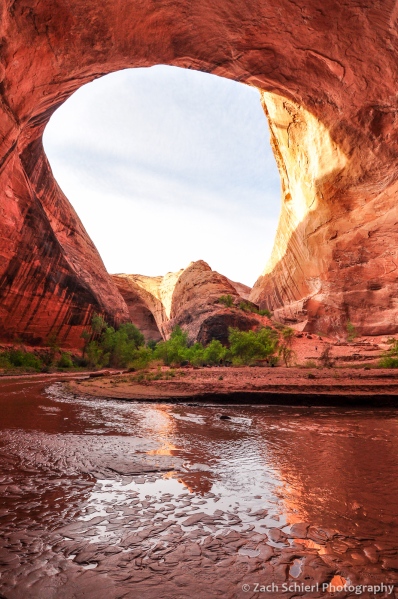 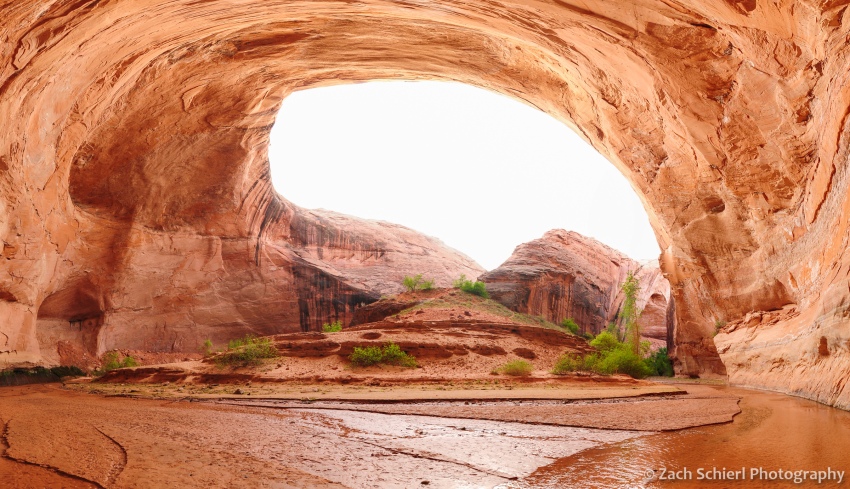 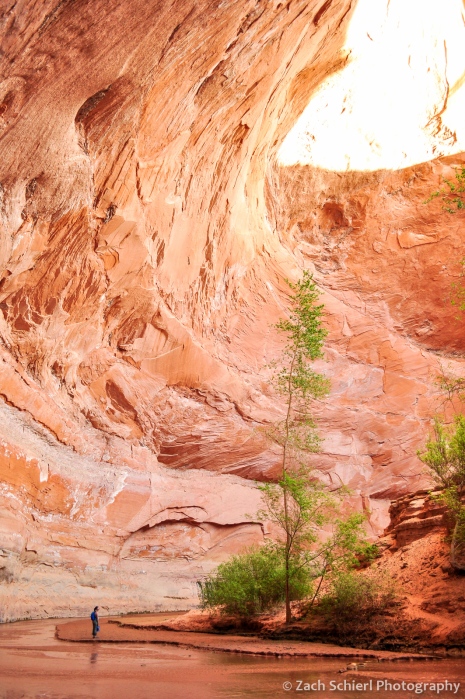 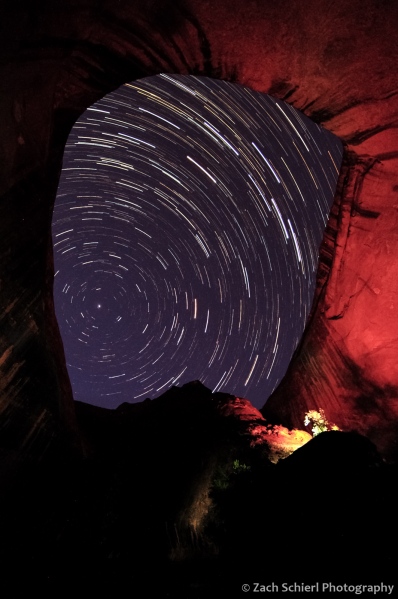 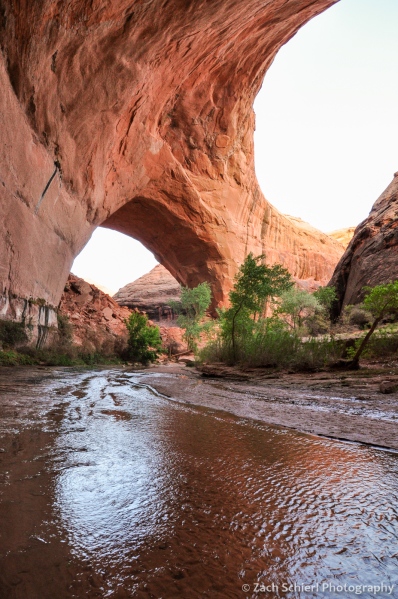 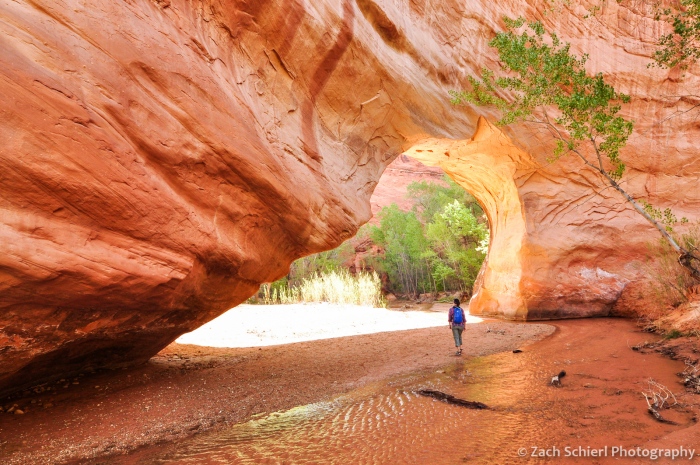 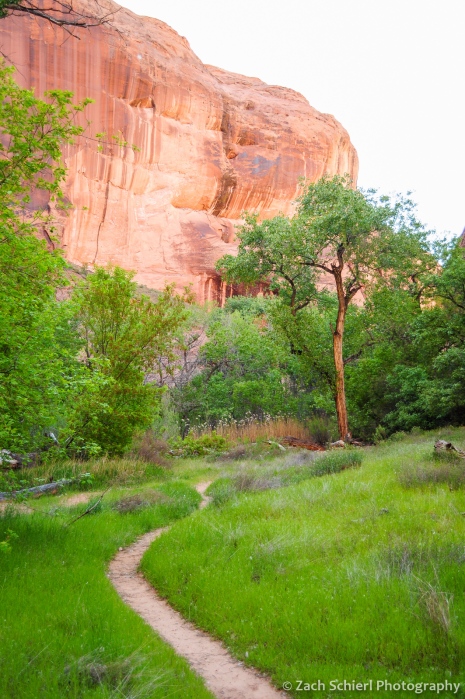 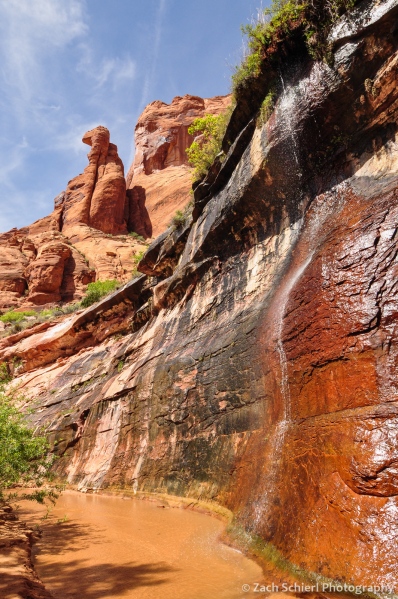 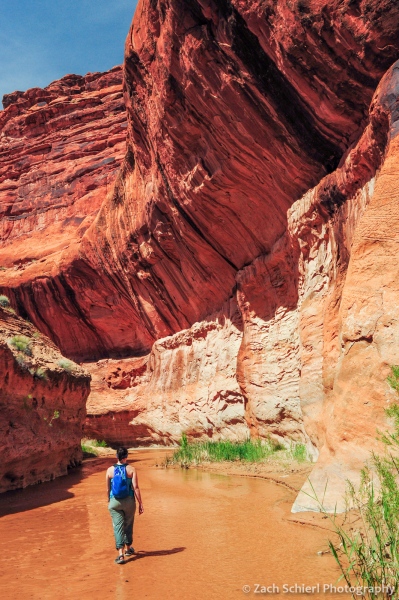 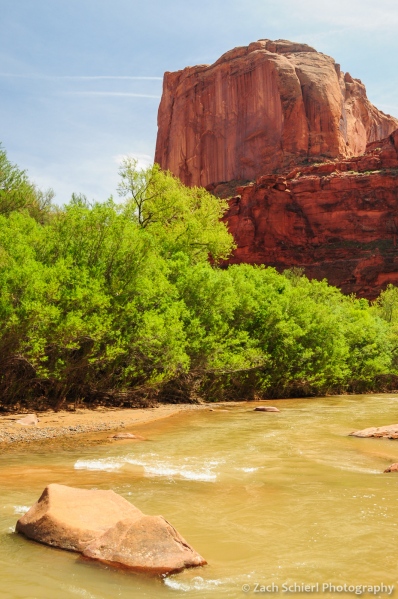 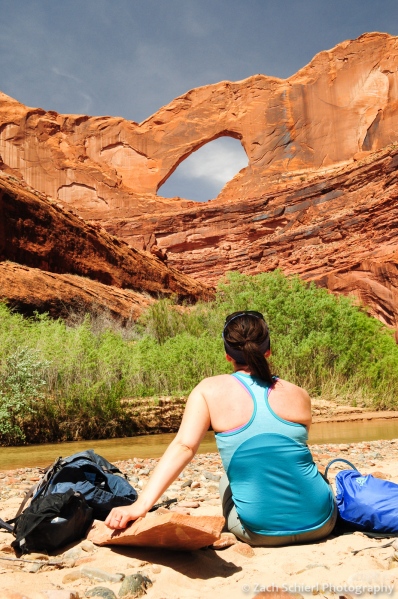 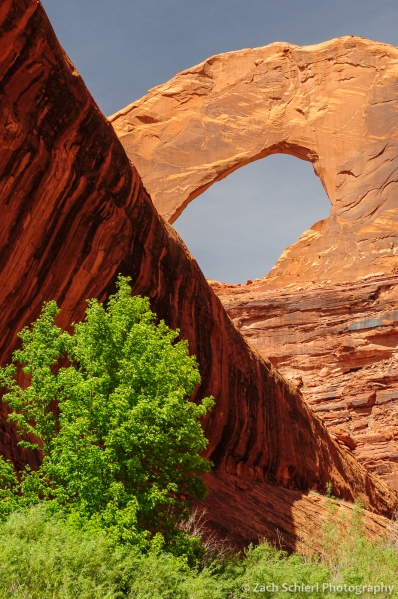 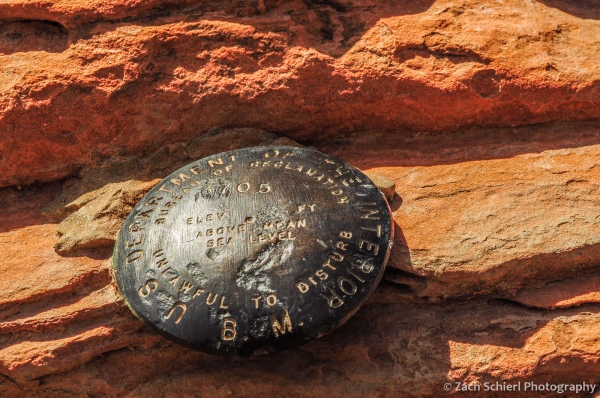 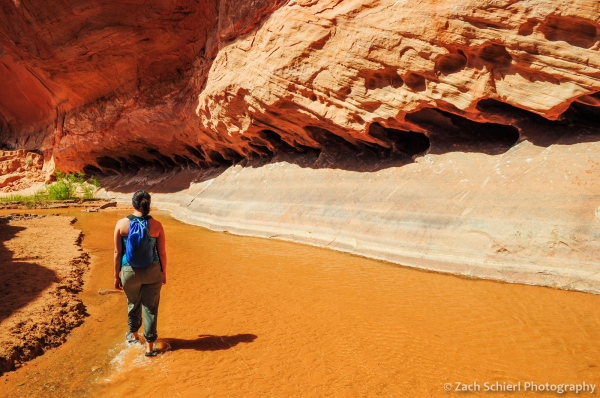 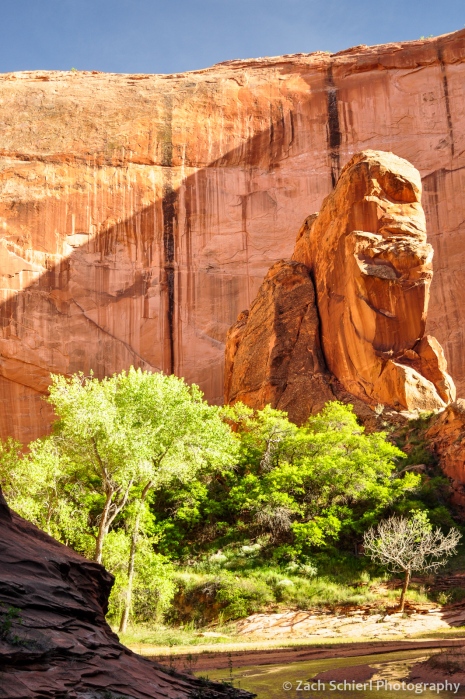 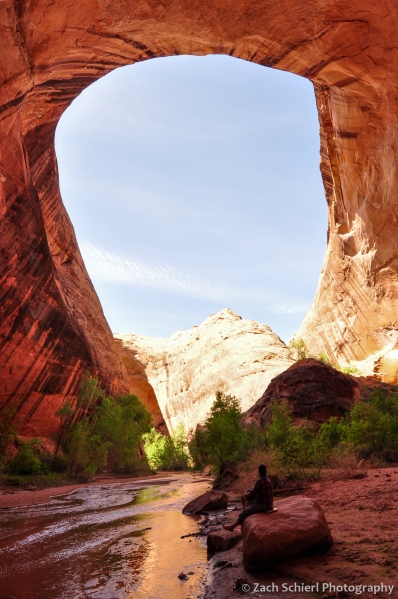 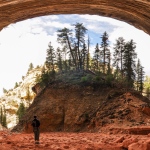 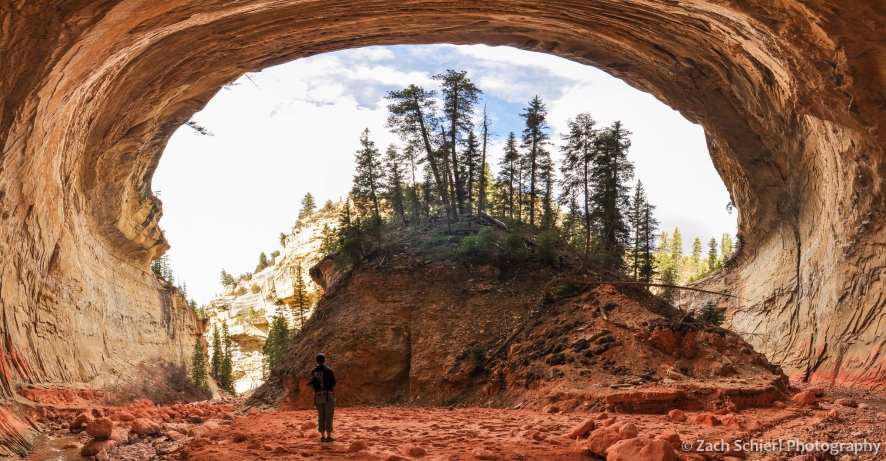 Inside a spectacular alcove along Ashdown Creek. Alcoves such as these are numerous along Ashdown Gorge where the stream has eroded laterally into soft rocks near the canyon bottom. The perspective here makes the alcove appear a little deeper than it actually is, but the entire creek bed lies beneath the overhanging cliffs.

Not far from the increasingly overrun splendors of Bryce and Zion is a canyon frequently overlooked when discussing the many attractions of Southern Utah. The stunning Ashdown Gorge lies just a few miles from Cedar City off of Highway 14, yet I’ve seen a grand total of three other people on a pair of weekend hikes up the gorge this summer & fall. The solitude likely stems from the fact that there is no marked trail or trailhead for this hike; Ashdown Creek is the trail for a spectacular jaunt up the canyon. One must also scramble down the steep toe of an active landslide strewn with old vehicles, guardrail fragments, and asphalt chunks just to reach the creek bed from the highway. Once this has been accomplished though, it is fairly easily walking for many miles up the gorge as the water in the creek is typically only ankle deep except during spring snow melt and after heavy rains. 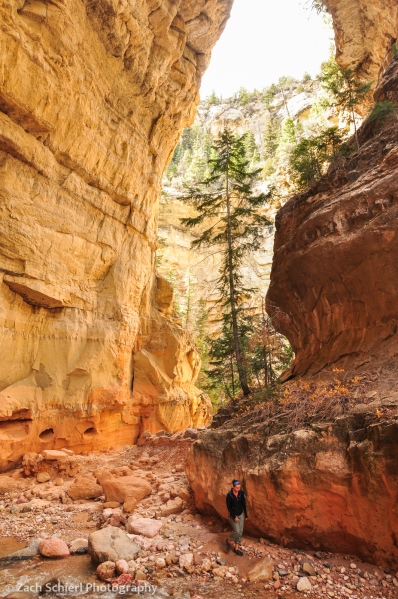 Beautiful colors in a narrow section of Ashdown Gorge.

Ashdown Gorge has a very different character than many canyons in Southern Utah, starting with the color of its walls. Not red or pink – the famous layers of Zion and Moab are well below the surface here – but rather varied shades of grey, tan, and yellow. The majority of the gorge is carved into the Cretaceous Straight Cliffs Formation, an impressive unit formed when southwestern Utah was a swampy coastal plain trapped between a disintegrating mountain range to the west and the shallow Cretaceous Interior Seaway to the east. Periodic but short lived rises in sea level are marked by occasional beds that contain almost nothing but fossilized oysters and other marine organisms. 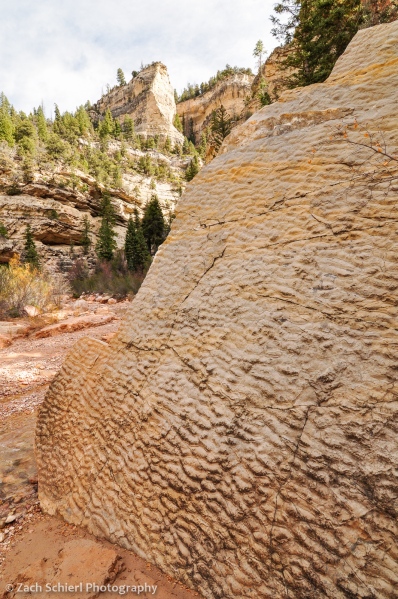 Not far from the junction of the gorge and Highway 14 is a gigantic boulder of the Straight Cliffs Formation displaying some of the best preserved ripple marks I’ve ever seen!

Ashdown Gorge is not quite a slot canyon, although it tries in places. Despite this, the walls for much of its length are several hundred feet high and there are many locations where you would NOT want to find yourself during a flash flood, so take a close look at the weather forecast before attempting to explore the gorge! Unlike the relatively hard sandstone that forms most of Utah’s famous slot canyons, the Straight Cliffs Formation is rather soft and crumbly. The creek has taken advantage of this by eroding laterally in many places. The result of this erosion is perhaps most spectacular around the outside edges of the many tight meanders of Ashdown Creek. Here the creek has carved into soft layers near the canyon bottom, undercutting harder layers of sandstone near the rim, creating vast alcoves that completely cover the creek bed. 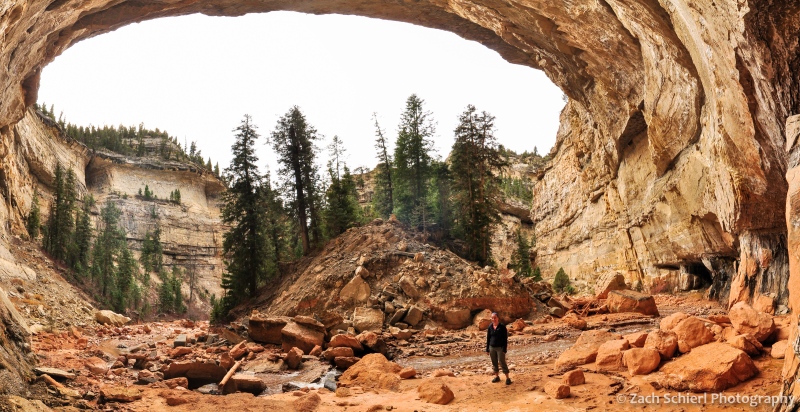 Inside another alcove further downstream. Beneath this one were a plethora of large, partially pulverized blocks of grey rock that had clearly fallen quite recently (they had not yet been covered in the orange mud like most of the rocks in the creek bed) from the overhang above. We chose not to stick around in this one for long…

While walking along the creek, one thing that is striking is the color of the boulders upon which you walk. Not grey and tan like the canyon walls, but rather varying shades of orange, pink, and red. This is because Ashdown Creek drains the vast amphitheater of Cedar Breaks National Monument upstream to the east. The soft limestones and siltstones of Cedar Breaks are easily eroded, and Ashdown Creek can turn bright orange during even minor rains. 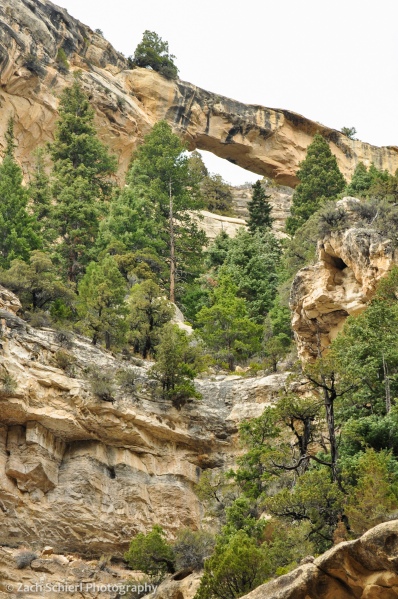 Another highlight of a hike up Ashdown Gorge is a good view of Flanigan Arch, an impressive span (reputable estimates of its length are hard to find, but most seem to say ~60 feet) that is difficult to access or even see from any other location.

In addition to the lack of crowds, the high elevation of Ashdown Gorge (7000-8000′) makes it a wonderful day hike (or potential overnight trip) for escaping the heat in summer (just watch for flash floods…) Ponderosa Pine, spruce, and fir are the most commonly seen large trees in the gorge which has a very “mountainous” feel to it. When we hiked it in late October, the temperatures were actually getting a little too cool to fully enjoy the numerous required stream crossings. In June when it was 80 degrees, the creek crossings were heaven! 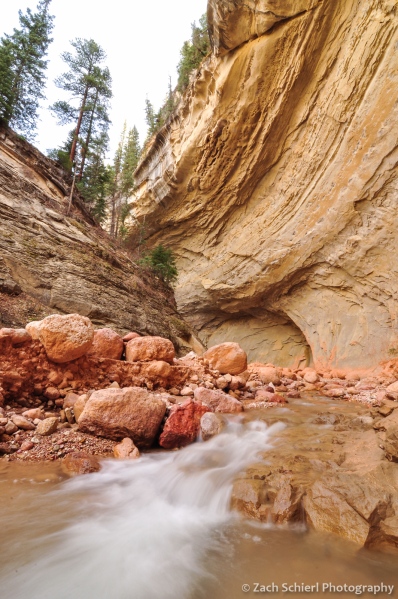 Some small riffles along Ashdown Creek. 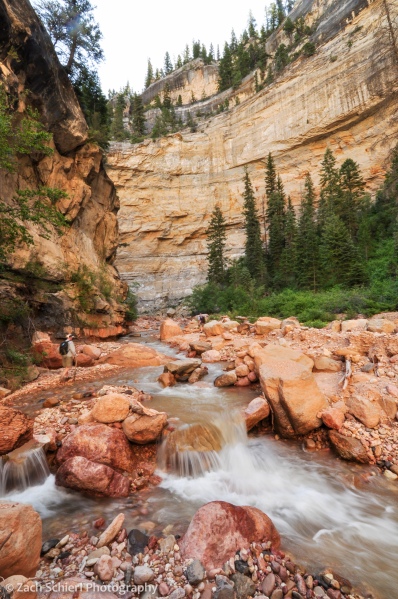 Hiking up the gorge is fairly easy, a few small riffles and waterfalls can be easily scrambled around.