Southern Utah is a mecca for tourists from around the world, and most of that blame can be placed on the shoulders of a single layer of rock: the Navajo Sandstone. Quite possibly one of the most famous geological formations in the world, the Navajo Sandstone is responsible for the soaring cliffs of Zion National Park, the monoclines of Capital Reef, and the undulating, swirling, entrancing patterns of the The Wave in Arizona and Grand-Staircase Escalante National Monument in Utah. The Navajo Sandstone also rears its beautiful head in lesser known gems, such as Snow Canyon State Park just a few minutes northwest of St. George, Utah.

Snow Canyon is actually several canyons in one, all cut into the Navajo Sandstone. The original Snow Canyon existed up until about one million years ago, when it was rudely filled in by a series of basaltic lava flows originating from the northeast. Water, being the couch potato that it is, doesn’t like to carve through hard volcanic rock, so the stream that had excavated Snow Canyon promptly jumped ship to find some more Navajo Sandstone, and thus began establishing a new canyon slightly to the west. The stream went about its business carving Snow Canyon #2 until about 10,000-20,000 years ago, when it was thwarted by yet another lava flow. True to history, the stream changed course a second time, and is now busily carving Snow Canyon #3 even further to the west. The result is a multi-tiered canyon, with the remnants of the canyon-filling lava flows forming the tread of each step.

360 degree panorama of Snow Canyon State Park from the top of a “turtleback” of Navajo Sandstone, a small knob of rock that was surrounded by basaltic lava flows that diverged around it during eruptions 10,000-20,000 years ago. The small dark black patch just to the left of center is the entrance to a lava tube. The current iteration of Snow Canyon is seen at left.

The Navajo Sandstone itself is a colossal formation, several thousand feet thick in places, representing the lithified remains of a large Jurassic sand dune sea (known as an erg), likely analogous to the modern day Sahara desert. If you think Southern Utah is hot and dry today, imagine being there 180 million years ago when the climate was hot and hyper-arid. Add some dinosaurs and you’ve got yourself a fun day in the Jurassic desert. Over time, mineral-rich fluids percolated through the sand, depositing mineral cement in between the sand grains, binding them together into stone. The Navajo Sandstone is known for its spectacular aeolian (fancy geology-speak for “wind-blown”) cross-bedding, inclined layers that form when winds blow sand up the shallow face of a dune, only to have it tumble down the steep slip face on the other side. 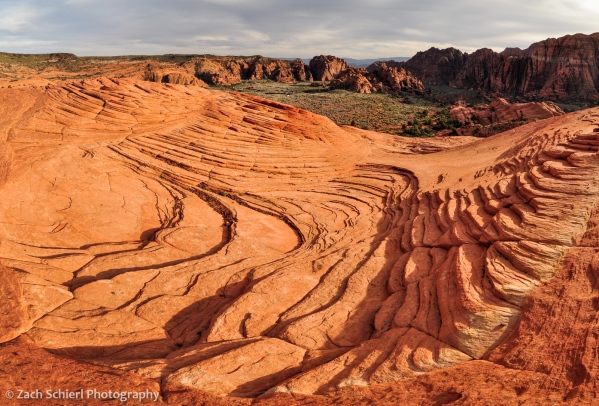 Looking south across swales and ridges of Navajo Sandstone from the Petrified Dunes trail in Snow Canyon State Park, Utah

A especially peculiar property of the Navajo Sandstone is the presence of occasional beds containing abundant spherical concretions of sand held together by the iron oxide minerals goethite and hematite (see photo at top of page). Commonly known as “moqui marbles,” these small spherules are slightly harder than the rest of the sandstone, so as the rock weathers away, the concretions are left behind to accumulate in large quantities on the surface of the rock. Moqui marbles can be found in many locations throughout Utah. And on Mars. The discovery of nearly identical hematite concretions by the Opportunity rover was some of the first definitive evidence that liquid water once flowed on the red planet, since the formation of the marbles requires groundwater to dissolve, and then re-precipitate iron minerals in the subsurface. If you are intrigued by my incredibly vague and simplistic description, you can find much, much more on the moqui marbles and their mode of formation here. If not, you are hereby forgiven and are welcome to enjoy the final photo without guilt: 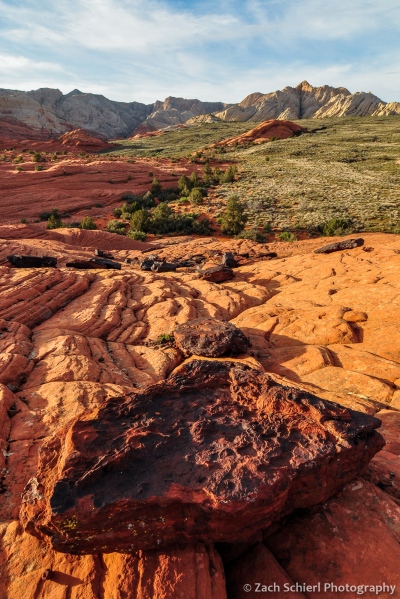 Hematite rich beds in the Navajo Sandstone are more resistant to weathering & erosion, forming large brown, black, and red boulders that are scattered across the landscape