Caught Between the Seasons 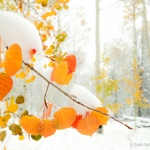 Winter has arrived in the high country of Utah. Fortunately for photographers, autumn was still very much in progress when the snow started to fly. The contrast between the mid-winter wonderland and vestiges of fall color made for some great photo opportunities over the past few weeks: 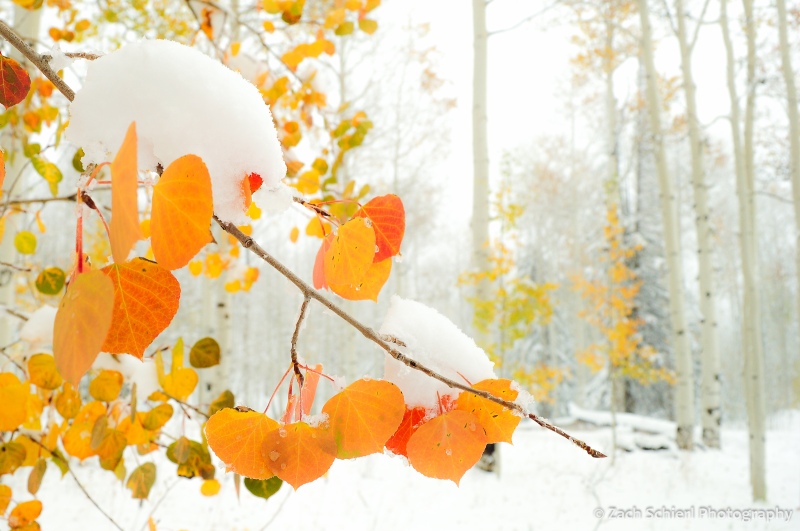 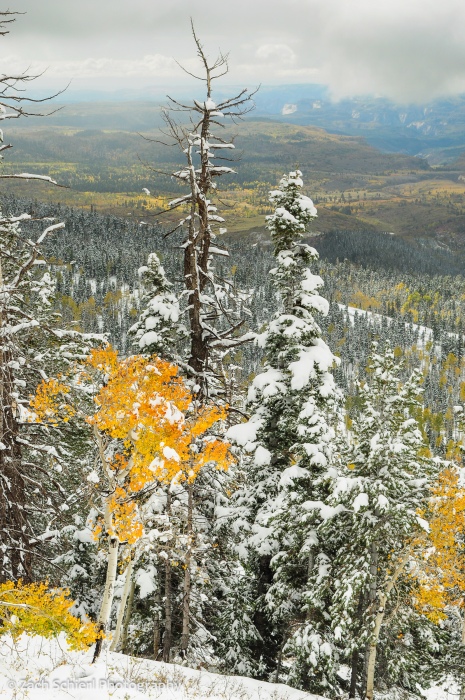 Colorful aspens among snow-covered firs on the south slopes of the Markagunt Plateau, looking south toward Kolob Terrace and Zion National Park. 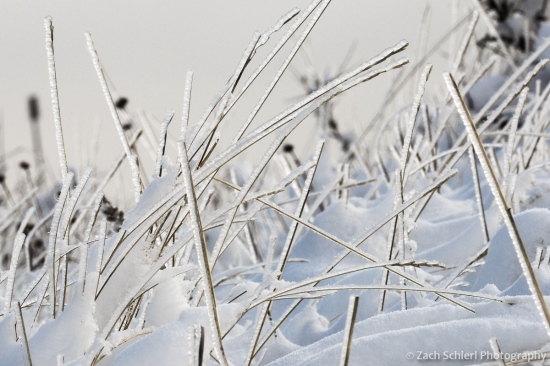 And the Thunder Rolls: the Southwestern Monsoon 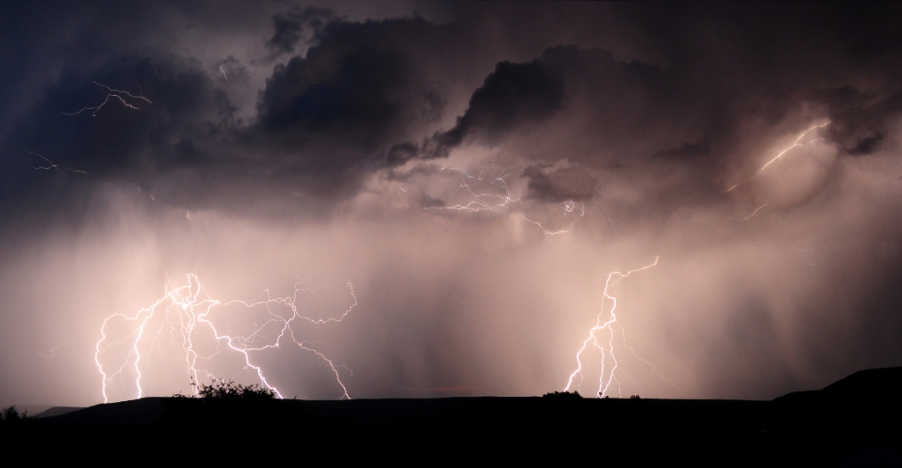 One of my favorite things about the southwest is the sheer ferocity of the thunderstorms that arrive like clockwork every summer. It has always seemed to me a particularly violent way of delivering water to the desert. Anyone who has visited Arizona, Utah, New Mexico, or Colorado in the summer knows how an apparently benign, cloud-free, blazing summer afternoon can spawn a multitude of life-threatening thunderstorms in a matter of hours. Known as the monsoon season, late summer in the American southwest is a time during which many areas can receive as much as half their annual rainfall in the span of just a few short weeks. Generated by the arrival of tropical moisture from the south, these are thunderstorms that force one to begin any summer hike involving peaks or ridges in the wee hours of the morning to avoid being caught in an unpleasant situation.  These are thunderstorms that claim the lives of dozens of people every summer, sometimes via lightning strikes, but more often via sudden deluges of water known as flash floods that result when rain falls so fast and so hard that it doesn’t have time to soak into the soil, and instead collects in raging torrents of water, mud, trees, and rocks that can travel vast distances, sweeping unsuspecting hikers dozens of miles away from the nearest raindrop off their feet. These are also storms that produce truly unforgettable memories (the fondness of which is directly proportional to how close shelter is at the time…) and great photographs, again assuming adequate shelter is close at hand.

Perhaps most mercifully though, these are the storms that ultimately temper the stifling heat that dominates the southwest early in the summer. Ironically, this oppressive heat actually brings about its own demise; the intense heating of the land surface in the early summer (May and June) is responsible for causing the monsoon rains that eventually bring temperatures back down to somewhat more humane values by late July and August.

Two words are all one really needs to fully describe conditions in the American southwest in the early summer: “hot” and “dry”. Temperatures soar well into the 100s in many locations and relative humidity values in the low single digits are commonplace. As anyone who has ever lived on the 2nd floor of a poorly ventilated apartment building in the southwest in the summer knows: hot air rises. This basic thermodynamic fact can be used to explain just about every aspect of what is formally known as the North American Monsoon, or any monsoon, or just about any form of weather for that matter. As the Sun heats the land surface, warm dry air begins to rise high into the atmosphere due to its lower density. This rising air column leaves a void, a sort of a partial vacuum if you will, behind it, creating an area of low atmospheric pressure over the sizzling southwestern states. This partial vacuum creates a welcoming pathway for warm, moist air from the tropics to slowly begin seeping its way north from Mexico and the Gulf of California.  As the month of June comes to a close, this tropical moisture has begun to saturate the air around the Four Corners region. Gone are the days of single digit humidity values, and by early July, the Sun, instead of heating bone-dry air, is heating air that is rich with moisture.

Large cumulus clouds, the infant stages of a monsoon thunderstorm, hover over Colorado’s highest point, Mt. Elbert. Clouds like these are a sign to hikers to get off the mountain and start heading for shelter; a scene like this can develop into a full-blown severe thunderstorm in as little as an hour.

Now when moist air rises, the water within it condenses into water droplets, first creating puffy cumulus clouds, and eventually enormous cumulonimbus thunderheads that can reach heights of more than 50,000 feet above the Earth’s surface. These storms normally develop in the afternoon, after the Sun has had several hours to warm the surface and generate a robust rising column of air. To give you an idea of just how fast these storms can expand, and since WordPress won’t let me post videos, here’s a fun little animated GIF showing about 15 minutes of growth in a late evening thunderstorm over the West Elk Mountains of Colorado. Notice the stars in the background:

While the annual arrival of the monsoon may be predictable, the individual storms that it produces are not in the slightest. The isolated nature of the storms can be incredibly surreal; I’ve been in locations where 2″ of rain and nearly a foot of hail fell in a matter of 30 minutes, while the ground half a mile away remained completely dry. And while the North American Monsoon may not pack quite the same punch as its southeastern Asia cousin, it nevertheless is a significant event, in both negative and positive ways, for all who live in the area. Good in that it provides the southwest with badly needed moisture in the late summer, and bad in that its unpredictable nature never fails to catch those unfamiliar with the weather pattern off guard. In addition, storms during the first few weeks of the monsoon will often generate copious amounts of lightning, but very little rain, sparking numerous wildfires in tinder-box dry forests that haven’t seen rain in months, fires that are nearly impossible to extinguish until heavier rains arrive to douse the flames.

Photographing these storms is most easily accomplished at night, when you can simply point the camera at the storm (provided you and your metal tripod are somewhere reasonably safe), leave the shutter open for a few minutes at a time, cross your fingers, and hope for a few well placed strikes. While the best bolts inevitably occur in the two seconds your camera is processing your most recent exposure, or are located juuuuuuuuuust outside the camera’s field of view, rest assured that the light show that nature puts on will still be exponentially better than anything you could possible see on your computer monitor or TV screen. 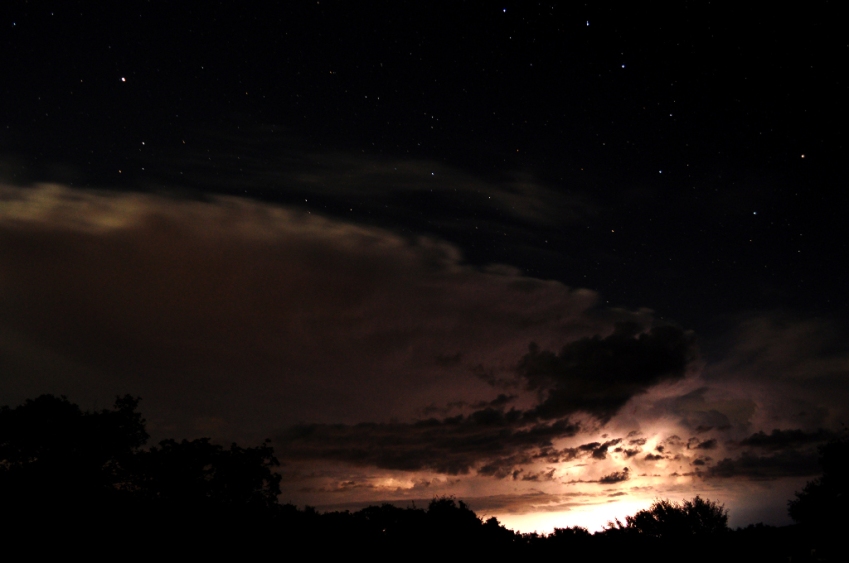 The crest of a large thunderhead stops just shy of obscuring the Big Dipper.