I’ve always thought that it would be one of the few large cities where I could actually stand to live. Never mind the fact that my current and projected foreseeable future income levels will not permit me to live in any of the parts of the city to which the above statement applies. Or the fact that the next major rupture of the San Andreas or Hayward faults is going to make things look…shall we say…”less attractive”. Ignore those minor details for now. All I mean to say is that it seems like a nice place to live, which is a thought that perplexes me, given that in general, the idea of living in the same metropolitan area as several million other human beings makes me want to look up job listings for “hermit” and run away into the hills screaming. San Francisco though seems to have a charm and a combination of positive attributes though that most other cities do not.

For starters it is located in one of the most scenic environs of any city in the country. Rolling grassy hills, redwood groves, long stretches of sandy and rocky beaches, rugged coastline, appealing architecture, fortified islands, all within an hours drive of the city center. Hard to match that. Seattle comes close (the view of Mt. Rainier on a clear day? ahhhhhhh) but it gets marked down because it gets, on average, 14 more inches of rain each year. Salt Lake City has gorgeous mountains but it is covered in snow for part of the year and tends to get smothered by thick layers of pollution that get rammed up against the western flanks of the Wasatch. And all cities east of the Rockies are automatically disqualified because they’re east of the Rockies. To some Phoenix might seem sort of scenic, what with the 50 foot high cacti and mountains and all, until you realize that in reality it is a sizzling hell hole with literally no sustainable water source and is totally unfit for large quantities of human habitation. At least San Francisco has Yosemite just a few hundred miles away that it can poach water from. Also, it sort of seems like everything in San Francisco is painted either white or a nice bright pastel color. Painting everything white does wonders for a city; it makes it feel larger, cleaner, less claustrophobic, and lends a nice airy, ethereal quality to everything.

San Francisco also has what in my opinion is one of the few man-made creations that actually contributes to the beauty of a place rather than besmirching it: the Golden Gate Bridge. In case you’re not familiar with the bridge, it is one of the few things in San Francisco not painted white or pastel, but rather a bright burnt orange (actually “international orange” for those of you who want to go out to your local Home Depot and pick up a gallon). The “Golden Gate” for which the bridge is named (and not vice-versa) is a narrow strait that connects the Pacific Ocean to San Francisco Bay. In a somewhat eery coincidence, U.S. Army Captain and explorer extraordinaire John C. Fremont bestowed the now famous name upon the strait in 1846, two years BEFORE the strait was used as the point of arrival for millions of millionaire wannabees seeking riches in the newly discovered gold fields east of Sacramento. Fremont had given it the name Golden Gate because he recognized the area’s potential importance in opening up trade with the Orient, completely unaware (obviously) that the discovery of real gold in California is what would cause the population of the city just to the south of the strait, San Francisco, to multiply by 18,000% in just six years, and make the Golden Gate known worldwide. In the 1920s, fed up with the 20 minute ferry ride across the strait, some folks decided it would be a bright idea to build a bridge across it, apparently thinking that sitting in traffic for more than 20 minutes waiting to cross the strait while constantly having to yell at the driver in front of you to stop futzing with their iPhone and drive would somehow be more pleasant than the leisurely ferry crossing.

An unique perspective on the 1.7 mile-long suspension bridge can be obtained by going beneath it. If you don’t have a boat, fear not, in another stunning coincidence, the U.S. Army conveniently constructed a masonry fortification, Fort Point, on the point right beneath the south end of the bridge in 1853*:

Under the Bridge: the remains of Fort Point, built in 1853 to secure San Francisco Bay from enemy attack.

*Actually the Army did no such thing. You know, seeming as how the technology to build a massive metal suspension bridge across a deep, windy, 1.3 kilometer wide strait didn’t exactly exist in 1853. The engineers in charge of building the bridge eighty-odd years later did however build the bridge directly above the fort (they wanted to remove the Fort entirely but cooler heads prevailed), and so the Fort, being the rather inanimate object that it is, remains there to this day, providing a nice spot to stand and look out over the bay while holding on to your hat and listening to rush-hour traffic crawl past on the bridge high over your head.

Arguably the best, although not most unique, views of the bridge can be found north of town, just off of Highway 101 in the Marin Headlands where a number of overlooks along Conzelman Road provide spectacular vantage points from which to observe or photograph the bridge.  These overlooks aren’t a secret though, the ones closest to Highway 101 are predictably packed with people and it can be impossible to find a parking spot. However, the bridge is also partially obscured here, head further and higher up the road for more expansive views that, while still busy, become less so the further from the highway you get. and. The number of tripods also increases steadily as you get further and further from the interstate which I interpreted as a good sign since one of my goals was to get some photos of the bridge at sunset. As you can see in the picture at the top of the page, these overlooks are often slightly above the fog that socks in the coast from time to time.

Most people seem to stop and turn around at the one-way-road/18% grade sign that appears along Conzelman Road just before it begins to wind its way back down through the headlands to the coast. If you proceed onwards though, you will be rewarded by getting to shift your car into low gear, and also by a plethora of quieter and more secluded, albeit more distant, views of the bridge. The road ultimately deposits one at the trail leading to the Point Bonita Lighthouse, located at the northern entrance to the Golden Gate. The lighthouse was built in 1853, and yet several hundred ships still managed to wreck themselves in this area during the influx associated with the California Gold Rush, a testament to the ability of the area’s trademark thick fog to obscure any sign of the coast until its too late. 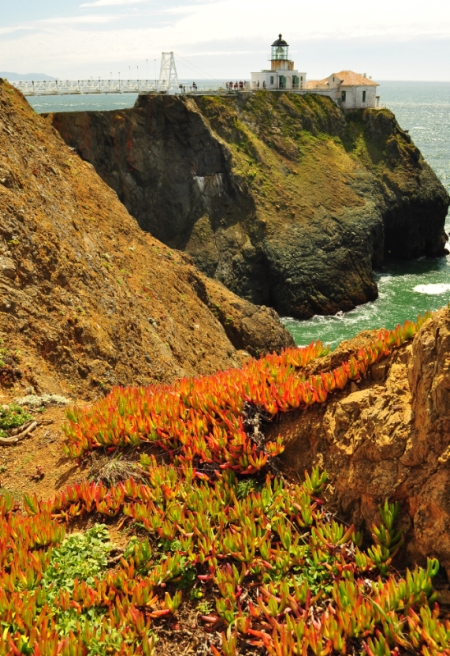 More pictures of the local flora and fauna hopefully coming soon, including the biggest group o’ Grebes you’ve ever seen in one photograph.

In which Zeus makes a brief visit to Walla Walla…

Lightening and thunder usually avoid Eastern Washington like Jack Abramoff avoids paying taxes. In nearly four years here, I can recall just two other events that were worthy of association with the word “thunderstorm” and Monday evening’s outburst was of the finest bursts of hellfire I’ve seen in a while. Kudos to Brian Percival for extracting me from my room (thesis work be damned) and alerting me of the approaching storm.

My previous attempts at lightning photography have been severely hindered by rain and the fact that standing outside next to a metal tripod during a thunderstorm is generally considered a poor life decision. Fortunately, I live in an apartment located on the upper level of a building containing a winery and a fitness studio (one naturally wonders about the amount of overlap between the clientele of the two businesses…), thus providing me with a reasonably safe, elevated vantage point from which to view the storms. Being able to set up my tripod inside the front door and rattle off a couple hundred exposures ranging in length from 1-30 seconds made things pretty straightforward even once it started raining and lightning started hitting campus buildings. The extremely luminous building in the immediate foreground is a hotel known for relatively frequent drug busts, while the tall structure at left in some of the photos is the Marcus Whitman Hotel, the tallest building in Walla Walla and one which is located at the extreme opposite end of the Walla Walla lodging spectrum. Oddly enough, even once the storm was nearly on top of us, there was still very little thunder to be heard, just a fantastic light show and a brief period of intense rain and wind.