Driving west on Highway 2 over Stevens Pass last spring, I kept catching glances of what appeared to be some sort of elongate, dark grey, overgrown, man-made structure paralleling the highway on the opposite site of the Tye River valley. Whatever it was, only isolated chunks of it were visible through the dense vegetation and the deep, late-season snowpack. It appeared to me to be made of concrete, although it was hard to be 100% sure given that my primary goal at the time was to prevent a van full of people from careening off the highway and plummeting into the gorge below. Ironically, little did I know that the very existence of the mysterious object I was seeing was the result of a passenger train carrying hundreds of people doing exactly that 113 years earlier.

Walking through a large concrete snowshed along the Iron Goat Trail, built at the site of the 1910 Wellington disaster to prevent future avalanches from sweeping trains and passengers off the rails.

It didn’t take long after getting home to my internet connection to figure out that what I was seeing was the old grade of the Great Northern Railway, the northernmost of the transcontinental railway routes in the U.S. The Great Northern reached Seattle in 1893 and the route it took across the Cascades can best be described as “gnarly”. A series of extremely steep switchbacks, and eventually a 2.60 mile long tunnel completed in 1900, funneled trains safely, if not easily, over Stevens Pass to Seattle. In the summer at least. The biggest danger of the route lay in the combination of heavy winter snows and steep rugged topography. The railway built a number of snowsheds, large concrete or timber structures which covered the rails in avalanche prone areas to protect the locomotives. Avalanches don’t always play nicely though, and in March of 1910, during a storm in which 11 feet of snow fell in one day, a 10′ thick slab of snow detached from Windy Mountain several hundred feet above the tracks and swept two trains off the tracks just outside the railroad town of Wellington, Washington. 96 people perished in what remains the deadliest avalanche in U.S. history, and one of the worst railroad disasters in the country’s history to boot.

Despite the somber backstory, the old railroad grade has been turned into what has to be one of the most fascinating hiking trails in Washington: the Iron Goat Trail. Taking its name from the mountain goat on the logo of the Great Northern Railway, the Iron Goat trail follows the portion of the railroad grade that was abandoned in 1929 after the 8-mile long Cascade Tunnel (still in use by the BNSF today) opened, which for the first time allowed trains to bypass the pass and its deadly avalanche chutes entirely.

While this hike may not provide a wilderness experience (Highway 2 and the associated drone of motor vehicles is just a stone’s throw away across the valley), it does provide a heavy dose of history and just enough eeriness to keep you from ever wanting to spend the night. In between the Wellington disaster and the opening of the Cascade Tunnel, a span of just 19 years, the Great Northern Railway heavily fortified the section of rails near Stevens Pass in an attempt to prevent another disaster. I hiked the four mile section of the trail from Highway 2 to the Wellington Townsite and nearly the entire stretch was engineered in some way: tunnels, timber snowsheds, concrete snowsheds, you name it, the Great Northern Railway spared no expense in attempting to tame the mountains and make this a viable travel route over the Cascades. They even gave the town of Wellington a new name, “Tye”, because of all the bad publicity. Ultimately though, the mountains emerged victorious: the line was abandoned in favor of the tunnel less than 30 years after it was first constructed, leaving the man-made structures built in response to the Wellington disaster to slowly decay and become re-assimilated into the mountain.

This process is already well underway. After decades of enduring heavy winter snows, timber snowsheds are now unrecognizable piles of rotting wood. Concrete snowsheds are crumbling, exposing their innards in a scene that my hiking partners likened to the post-apocalyptic visuals of the Hunger Games.

Many of the tunnels have partially collapsed, including the Old Cascade Tunnel, the longest in the world when it opened at the beginning of the 20th Century. In 2007, a portion of the roof collapsed, creating an unstable dam of debris which occasionally likes to rupture and send a deadly torrent of water rushing out the west end of the tunnel without warning. The Windy Point Tunnel, built to keep trains from derailing around a particularly sharp curve, is also slowly crumbling away while the entrances are slowly reclaimed by the forest: 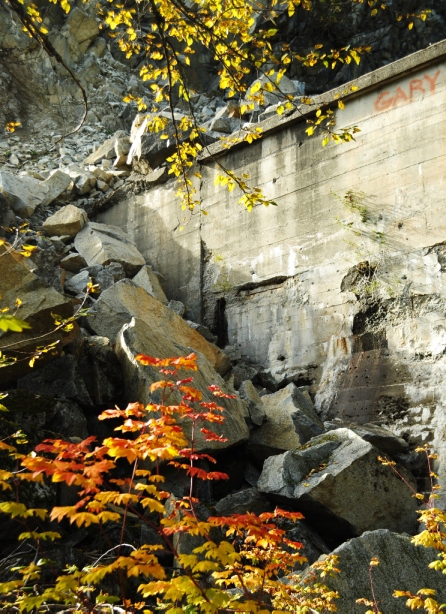 Portions of the Windy Point Tunnel have been heavily damaged by rockfall. Thankfully, Gary and the fall foliage escaped unscathed.

After a somewhat strenuous 700 foot climb from the trailhead up to the Windy Point Tunnel, the hike follows the gentle grade of the old rail bed for several miles in either direction. Thanks to impressive work by local volunteer groups, the trail is well-maintained and a series of interpretive signs explain the history of the Great Northern Railroad and the chain of events that led to the Wellington disaster. Several spots on the trail have great views of the Tye River valley and the surrounding peaks in the Cascades making for a beautiful, intriguing, and incredibly diverse hike. But stay away during the winter for obvious reasons, and like I said, not really somewhere you’d want to spend the night…

Fun graffiti inside the concrete snowshed

For more info, trail maps, and directions, check out http://www.irongoat.org/