Larch Hunting in the North Cascades

Golden Larches at Blue Lake in the North Cascades.

Still reeling from the disappointment of having to leave Colorado a mere fortnight before the world’s largest Aspen forests exploded into their annual displays of color, I was determined to find some similar photo opportunities in Washington this fall.  The “Aspen of the Pacific Northwest” is arguably the Western Larch. Most common in the Northern Rockies, a handful of Western Larch stands can be found east of the Cascade Crest in Washington state. Tall but unassuming for 50 weeks out of the year, and then drop-dead spectacular for two, the Western Larch looks all for the world like an evergreen, but it is decidedly deciduous. Most high-altitude Pacific Northwest forests are all evergreen, so unless seeing dead and decaying brown pine-needles pile up on the forest floor is your thing, autumn up in the high Cascades isn’t anything to get too excited about. Add larch though and it’s a different story. The yellowish-green needles of the larch go out with a bang, turning a glittering golden-yellow for just a few short weeks in the late fall before leaving the tree buck naked until the following spring. 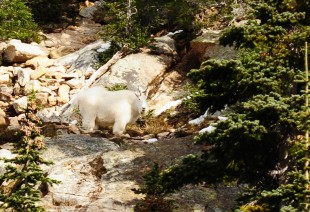 Golden larch season in the Cascades is an event that generally attracts hordes of needle-peeping Seattleites to the mountains. My hope was that the several feet of early-season snow the mountains had received in late September would be deep enough to temper the crowds. I was wrong. The parking lot at the Blue Lake Trailhead off of Highway 20 in the Okanogan National Forest was completely full, forcing us to park alongside the highway. Fortunately, photographers are born with an innate desire to bask in late-afternoon light which meant we were headed up the trail to Blue Lake late enough that most other folks were already on their way down. One advantage to having lots of folks on the trail was that we were alerted to the presence of a solitary mountain goat scrambling along a rocky gully a few hundred feet above the trail.

The lower portion of the trail was snow-free, but by the time we reached the goat and the larch groves, it was several feet deep. The main trail was hard-packed snow and ice due to all of the foot traffic but wandering off trail trying to take pictures of the larches sans people would definitely have been easier with a pair of snowshoes. The larches were nothing short of spectacular, especially against the snowy-white backdrop.  In the late afternoon sun, the color of the needles was so resplendent that you could have painstakingly coated each needle in gold leaf and not known the difference. Individual larches on mountain ridges miles away could easily be picked out, their needles back lit by the sun, shining like beacons in a sea of mountains. 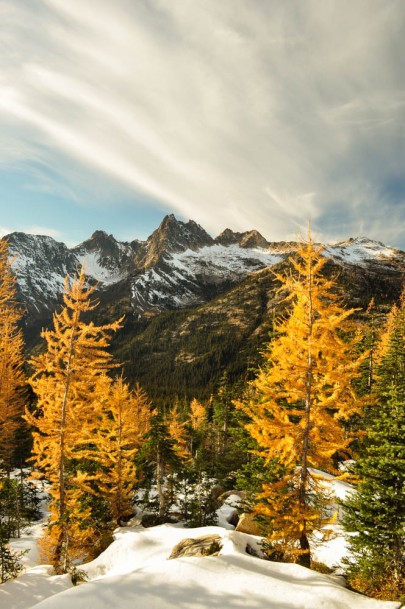 A surprisingly sunny and warm October afternoon in the North Cascades is perfect for larch hunting.

Exploring off trail, gazing out at the Cascades through the larches.

Later in the evening, headed to a lower-elevation (read: warmer) camping spot, I was able to catch the very last rays of sunlight on Liberty Bell Mountain. And just in case larches and a spectacular sunset weren’t enough, the clear skies and nearly full moon were ideal conditions for some nightscapes of the North Cascades! 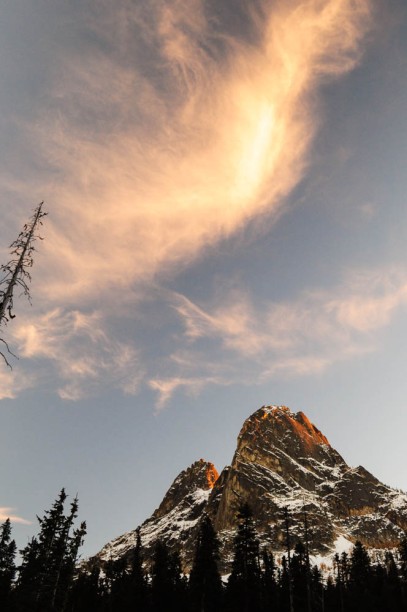 Sunset along the North Cascade Highway.

The constellation of Aquila sets over North Cascade peaks illuminated by the Full Moon .