How to see Yellowstone in just 9 hours

Legend has it that many years ago at Yosemite National Park, when asked by a visitor what to do if she only had one day to see Yosemite, a park naturalist responded, “I’d go down to the Merced River, put my head in my hands, and cry.” By extension, if one day to visit Yosemite necessitates tears, then surely allotting just one day to see Yellowstone, a plot of land nearly 3 times larger, is some sort of federal crime. Yellowstone is after all, 3 times larger than the state of Rhode Island (Pyroclastic Pixels fun fact™: 16 of our 59 national parks are larger than Rhode Island). Recently I found myself in Bozeman, Montana (just an hour or so north of Yellowstone) for a geology conference with 24 hours to spare so I rented a car and headed to Yellowstone for the day. The key to seeing anything in such a large park in such a short amount of time is focusing on one very small area. Since I actually hadn’t seen any geysers during my last trip to the Yellowstone area a few years back , I decided to head to the Old Faithful and Upper Geyser Basin. 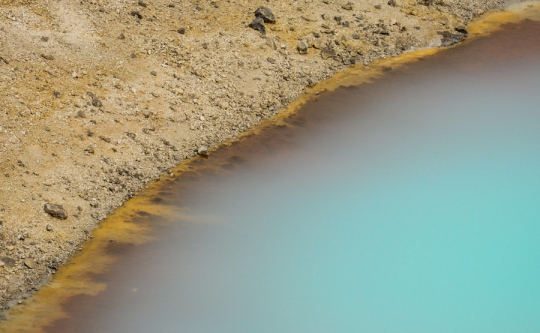 Before I get to the geysers, let me take a moment to describe a game that I highly recommended you play when visiting Yellowstone. The game is titled “How long can you be in the park for before seeing someone taking an ill-advised wildlife photo” and my score on this visit was 23 seconds, shattering my previous personal best by several minutes. While still in sight of the Roosevelt Arch (the iconic stone portal erected at the north entrance to Yellowstone in 1903), I witnessed a family of four exit their minivan and the parents proceed to usher their children, with their backs turned, to within about 10 yards of a herd of grazing bison in order to take a photograph. Fortunately no one got gored, but not everyone is so lucky. As interesting as the geology and thermal features are, for me the preponderance of wildlife is unquestionably the prime appeal of Yellowstone. When one is bombarded by sightings of elk, bison, bears, coyotes, herons, swans, and bighorn sheep within 5 minutes of entering the park, it can be easy to feel like you are touring some sort of very large zoo. But it is important to remember that these animals are still very much wild and there are no cages or fences between you and a very, very, very bad day. If you want to get a close look at wildlife, bring a pair of binoculars or a good telephoto lens and keep your distance. There is, after all, a very good reason why these are handed out at the entrance station.

A solitary bison wanders along a pool filled with late-season snowmelt.

I arrived at Old Faithful just in time to witness an eruption (the crowds gathered around on benches tipped me off). After watching from amongst the masses, I decided I wanted to spend the rest of the day somewhere a little quieter. A long hike into the wilderness was sadly out of the question, in part because of time and in part because hiking alone in grizzly bear country is generally considered to be inadvisable. Instead I decided to head up the short trail to Observation Point which, while only about half a mile from Old Faithful, is still long enough to leave 99.99% of other park visitors behind. I watched the next eruption from the Point, several hundred feet above the geyser.  Honestly the most fascinating part of watching from this vantage point was observing the number of people sitting on the benches ringing the geyser steadily increase over the half-hour preceding the eruption and then incredulously watching more than half of them leave before the eruption was even over. 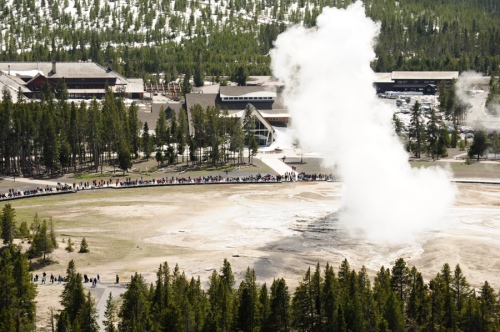 An eruption of Old Faithful is observed by hundreds of visitors.

At this point I got it in my head that it would be fun to make a time-lapse video of an eruption cycle, which involved me hiking back to my car to get my tripod and then climbing back up the hill. Once I had everything set up, I realized I had forgot my remote timer (not at the car but at home several states away) and would have to try to do the time-lapse by hand. This didn’t go so well for a couple of reasons. For one, whenever you set up a tripod anywhere, other people automatically assume you are some kind of expert on the area and start asking you lots of questions that you are in no way qualified to answer. And second, about a minute into the eruption itself, my focus shifted to a grizzly bear and cub that I spotted ambling out of the forest at the bottom of the hill (I ran into the same two bears on my hike back to the car about an hour later). The time-lapse didn’t turn out too well but it was still a fun day of people-watching, geyser-gawking, and wildlife-spotting. My tally after 9 hours in Yellowstone: three Old Faithful eruptions, hundreds of elk, dozens of bison and trumpeter swans, four grizzly bears, three marmots, one coyote, one bighorn sheep and 288 photographs!

An eruption of Beehive Geyser from Observation Point. 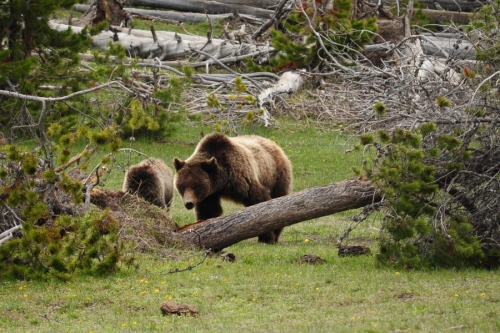 A mother grizzly and cub hanging out just a few hundred yards from Old Faithful.

Late-evening sun peeking through the clouds behind Clepsydra Geyser, which erupts nearly around-the-clock. 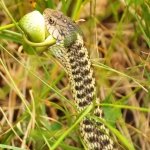 I’ve had some fascinating wildlife encounters the past few months. I’ve seen a mule deer give birth, encountered a herd of mountain goats at 14,000 feet, had some interesting run-ins with cows while camping (okay, cows aren’t technically WILD but still…), and even seen my first two porcupines. But the undisputed winner took place about five feet outside my bedroom door. The hill outside my door is covered in tall grass and shrubs. Anytime I have the door open, I hear the constant rustling of squirrels, chipmunks, cottontail rabbits, and the occasional coyote making their way through the grass. One day though, the rustling turned out to be this: 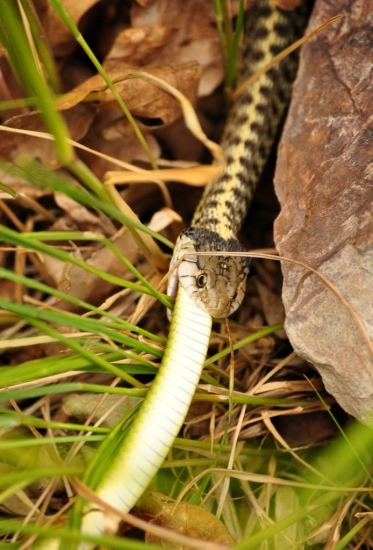 Just to be clear, that’s a garter snake (likely either Thamnophis elegans or Thamnophis marcianus…any snake people out there?) going NOM NOM NOM on a smooth green snake (Opheodrys vernalis). Now that’s not something you see every day.

I was fortunate enough to observe this spectacle in its near entirety, which in this case was almost two whole hours. The garter snake moved little; it was so focused on its meal that it seemed not even to notice me or the handful of other people watching the blatant act of serpentine cannibalism unfolding before our eyes. Every 30 seconds or so, the garter snake would open its mouth wide and constrict its jaw muscles slightly, entombing a few more millimeters of the green snake into its gullet. The green snake, which was consumed head-first, remained alive as it was being swallowed, as if being subjected to some diabolical form of medieval torture. Every few minutes it would engage in some futile thrashing for a few moments before the garter snake would wrestle it back into submission. At one point, a second green snake arrived on the scene and made a few jabs at the garter snake before retreating back into the grass.

Things got really wild in the final minutes. In what appeared to be a last ditch effort to avoid being completely ingested, or perhaps just a metaphorical middle finger to the garter snake, the green snake managed to tie the remaining few inches of its tail into an enormous knot. This befuddled the garter snake for a short while; it was already struggling with its decision to swallow a snake equivalent in size to itself and the knot didn’t make things any easier. After a few minutes though, the garter snake managed to open its mouth even wider and down the remainder of its meal, knot and all. Shortly after, the garter snake sluggishly slithered away, likely with a bad case of the meat sweats, and I went back inside feeling glad that I’m not as low on the food chain as the green snake. 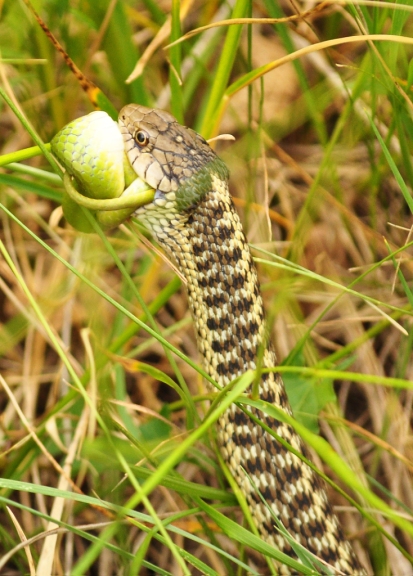 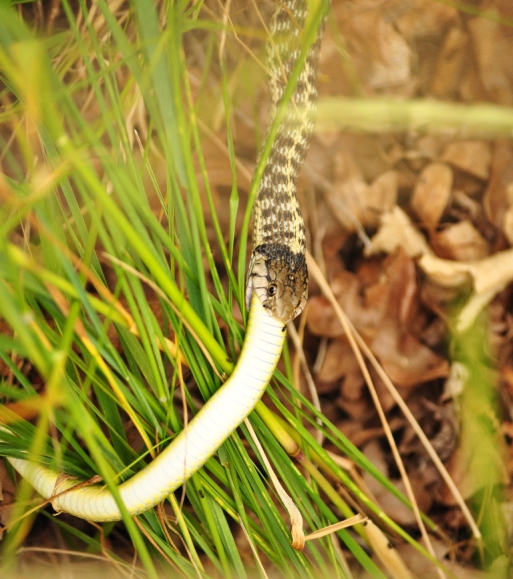 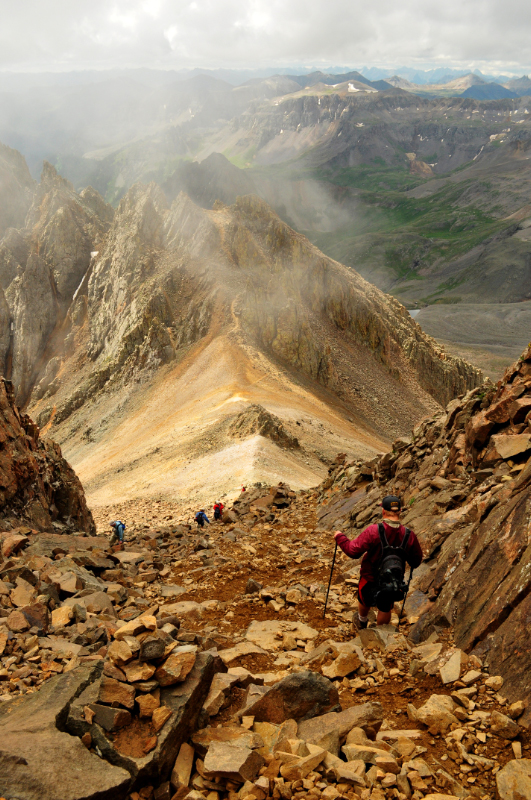 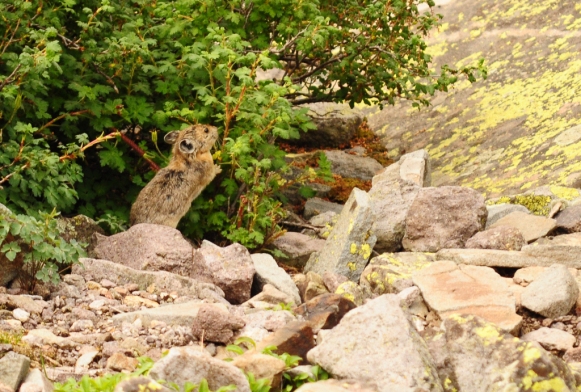 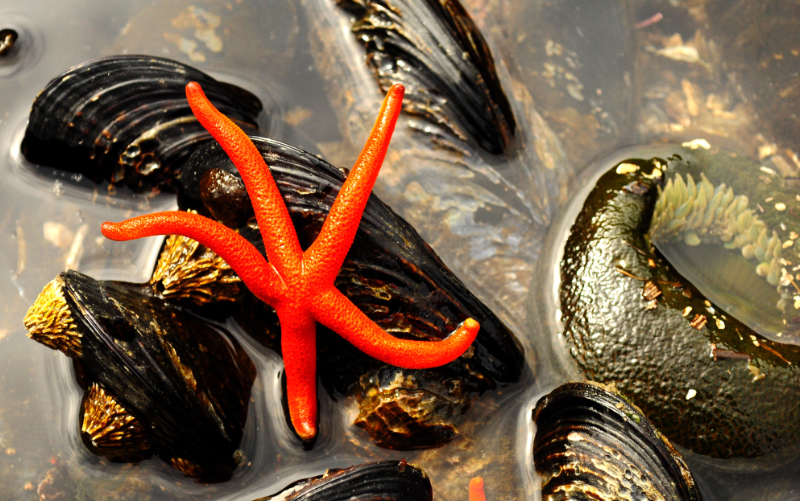