Compaction bands in multi-colored Aztec Sandstone, just one of many geologic wonders in Valley of Fire State Park, Nevada

One of the great things about living in Southern Utah is the abundance of different climates within a small geographic area. When temperatures rise into the 90s and 100s in the low-elevation valleys, we can be in cool alpine meadows at 10,500′ in less than an hour. When snow, slush, and mud cover the trails in winter, vast portions of the Mojave and Great Basin Deserts are within a day’s drive. One of these desert areas is Valley of Fire State Park in southern Nevada, not far from I-15 between St. George and Las Vegas.

Perhaps not surprisingly, upon arrival at Valley of Fire one is greeted with an array of whimsically sculpted red rock formations. Now red rocks are hardly unique in this part of the country, and the crimson cliffs here are no more notable than those found anywhere else in Utah or Arizona. But head into the interior of the park and you soon realize the allure of the Valley of Fire. After cresting the red cliffs, the hues begin to multiply exponentially and before long you are surrounded by just about every color of sandstone imaginable. 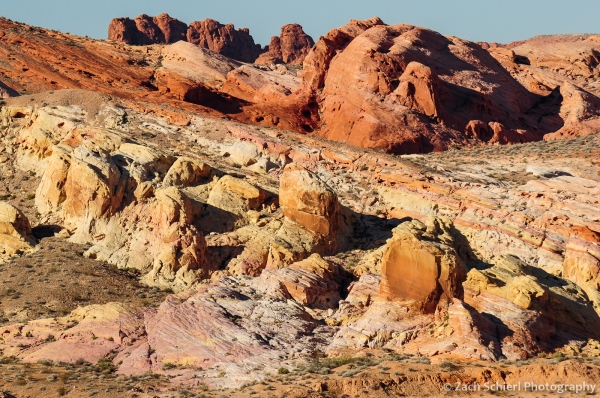 A layer-cake of spectacular colors in Valley of Fire State Park, Nevada

To put it bluntly, the colors at Valley of Fire are simply ridiculous…and attributable to its unique geologic location. The rocks here are mostly equivalent to those found throughout southwestern Utah and the Colorado Plateau. The Aztec Sandstone, the dominant rock unit exposed in the park, is the equivalent of the Navajo Sandstone that makes up the cliffs of Zion National Park. Geologists just assign it a different name when it appears in Nevada and the Great Basin. Perhaps the distinct name is appropriate though, given that the sandstone seems to take on a life of its own here.

Valley of Fire State Park lies within the Basin and Range province, a vast region covering Nevada and portions of half a dozen other western states where the Earth’s crust is being slowly but violently stretched apart. As the writer John McPhee once noted, so much stretching has occurred here that 20 million years ago, Salt Lake City and Reno would have been more than 60 miles closer together. Faults are abundant in this land, and fluids associated with some of these faults have at various times leached iron compounds from the originally all-red sandstone, causing some layers to become bright white, and re-deposited them in other layers, leading to the wide variety of colors.

Some of the most impressive colors are found just to the west of the “Fire Wave” feature near the northern terminus of the park’s scenic drive:

Vibrant colors in the Aztec Sandstone in Valley of Fire State Park, Nevada

A feature known as the “Fire Wave,” Valley of Fire State Park, Nevada

While there are numerous hiking trails, there is also lots of off-trail terrain to explore. Some of the most spectacular scenery can be found by parking at one of the numerous pull offs and just wandering out into the rock wonderland. One particular geologic feature of note is what are known as “shear-enhanced compaction bands,” thin brittle fins of rock that rise almost vertically out of the ground and often run continuously for dozens to hundreds of yards. At first glance, these features look like mineral veins, but upon closer examination they are composed of the same material as the surrounding sandstone, but are obviously slightly harder than the host rock. In many places there are two perpendicular sets of the bands, forming a checkerboard like pattern superimposed on the sandstone.

The bands are the result not of stretching, but of compressional forces that predate the formation of the Basin and Range. Stresses associated with an earlier mountain building episode (known as the Sevier orogeny) created these funky bands by essentially “squeezing” together (and even breaking) the sand grains that make up the rock, eliminating much of the empty space between the grains and forming a miniature layer of tougher, harder, and more compact sandstone that is slightly more resistant to weathering and erosion. As a result, the bands tend to just out from the surrounding slickrock by several inches, and even several feet in some locations. For such a seemingly obscure feature, many papers have been written about these compaction bands (and similar ones in a few other locations in the region). However my understanding of the structural processes behind their formation is limited and the most recent articles about them appear to be behind a paywall. If anyone reading this has more insight into these things, I would love to hear from you.

As mentioned before, these bands are quite thin, in most less than a centimeter thick and thus, sadly, quite brittle. They are easily broken by an errant boot step so if you find yourself among them, tread carefully so that future visitors will be able to experience this unique and colorful landscape.

Sunset from the Old Arrowhead Road in Valley of Fire State Park, Nevada