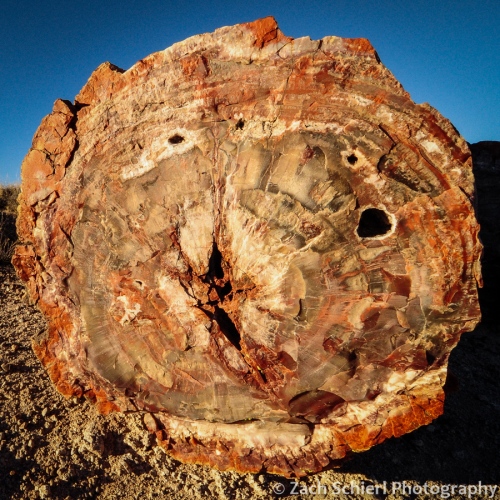 Despite being comprised almost entirely of quartz, trace amounts of elements like iron and manganese give petrified wood its myriad of colors.

I grew up about 90 minutes away from Petrified Forest National Park and, aside for a quick lunch stop about 10 years ago, had never visited before last week. While this is nowhere near as inexcusable as living in Arizona for decades and never visiting the Grand Canyon (yes, such individuals exist…I’ve met many), it still seemed like a bit of an oversight on my part. Or it could simply be a reflection of the inordinate number of outdoor activities that exist in northern Arizona; even living in the area for 10+ years isn’t enough time to hit everything. Either way, after finally venturing into the Petrified Forest, I can emphatically say that it should be mentioned with the best that northern Arizona has to offer.

Located amongst the vast Painted Desert of northeastern Arizona, the main attraction of Petrified Forest is of course the petrified wood. The formation of petrified wood is initiated when downed trees are quickly buried by sediment. Once entombed in the sediment, the lack of oxygen prevents the logs from decaying as they normally would when exposed directly to the atmosphere. In this case, the logs (none of which remain standing, despite the name “Petrified Forest”) were likely brought here in massive logjams along an ancient river system that existed during the Triassic period. A combination of sediment from the river and ash from nearby volcanoes buried the logs, not to be seen again for more than 200 million years. During this time, as the logs became buried under an increasingly deep pile of overlying sediment, dissolved silica began to crystallize in the pore spaces of the wood as quartz, eventually replacing all of the organic material while maintaining the original shape and structure of the log.

Petrified wood is not particularly rare. Good examples abound in Yellowstone National Park, Washington state, Utah, Colorado, Oregon, Alberta, New Zealand…the list goes on and on. What makes Petrified Forest National Park unique is the quantities found here. Due to the aforementioned Triassic log jams, large quantities of wood were concentrated in small areas. In a location known today as Jasper Forest (see photos below), movement was not possible without walking over a nearly uniform carpeting of small petrified wood fragments and frequently having to clamber over 2-3 foot diameter logs. Truly stunning! 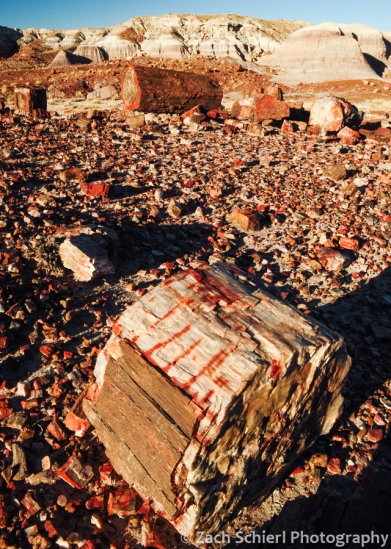 Overlooking the Jasper Forest at sunset.

Another unique aspect of Petrified Forest is the colorful canvas on which the wood is found. The wood is eroding out of a rock unit known as the Chinle Formation, which essentially consists of all of the river sediment and volcanic ash the buried the trees in the first place. More than 1000 feet thick in the park, the Chinle Formation is composed primarily of extremely soft mudstones, clays, and volcanic ash. Water is able to easily sculpt the soft rock into fantastically colored and oddly shaped badlands that make a spectacular backdrop for the logs. 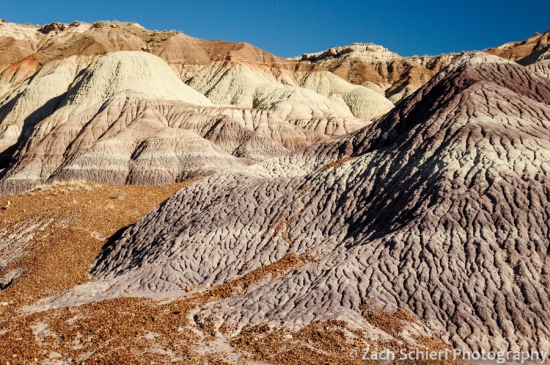 The soft muds and clays of the Chinle Formation are easily eroded, forming badlands-like topography throughout the Painted Desert. 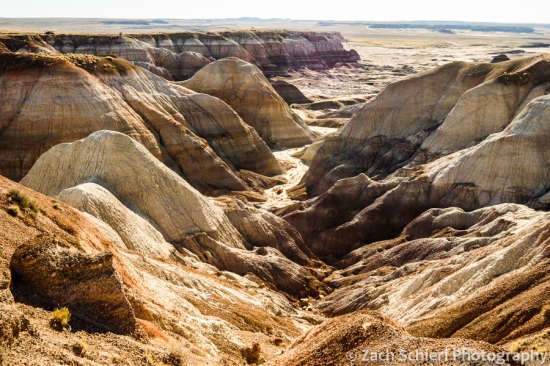 Colorful badlands in the Chinle Formation at Blue Mesa.

Petrified Forest National Park faces an issue not encountered by most other national parks, namely, the wholesale theft of the very resource it was established to protect. For this reason, the park is only open during daylight hours (from 8-5 in the winter) to minimize opportunities for looting. It strike me as very sad that such measures are necessary. With a little geological perspective, it becomes clear how incredibly lucky we are to experience a landscape like Petrified Forest at this moment in time. So easily eroded is the Chinle Formation that in many locations, several inches of it are removed each year. This may not sound like much, but geologically speaking, that’s a veritable bullet train of erosion. While it took tens of millions of years for the Chinle to be deposited, it will be erased from our planet by the unceasing forces of weathering and erosion in a tiny fraction of that. The petrified logs, being comprised mostly of silica, are harder and will last a little longer, but are still brittle and will eventually be washed into the Little Colorado River and swept downstream along with the colorful Chinle badlands.

What all this means is that the colorful Painted Desert/Petrified Forest landscape we see today is one that is extremely temporary. While this is true of most landscapes we see on Earth today—our planet likes to re-build, re-arrange, re-shape, and remove constantly—the Painted Desert is even more ephemeral than most. While mountain ranges comprised of harder, erosion-resistant granite or quartzite (like most of the Rockies) can stand the test of time to some degree, the longevity of the Painted Desert, its soft sediments, and its brittle petrified wood is comparatively brief. Stealing this treasured natural resource only abbreviates our time with the Petrified Forest even more.

The soft sediment surrounding the logs is easily transported away by small streams and washes. 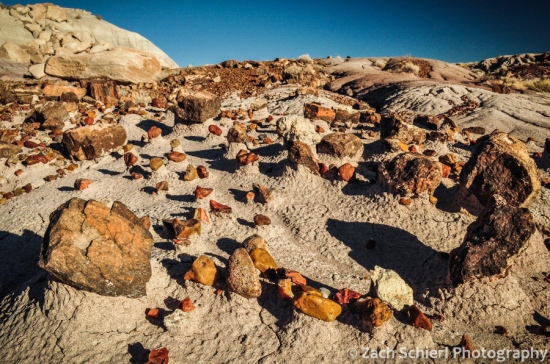