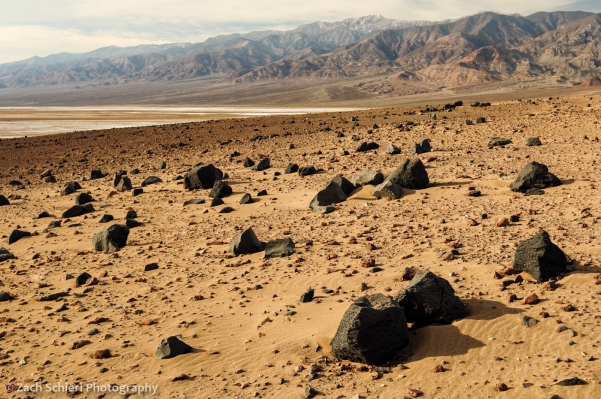 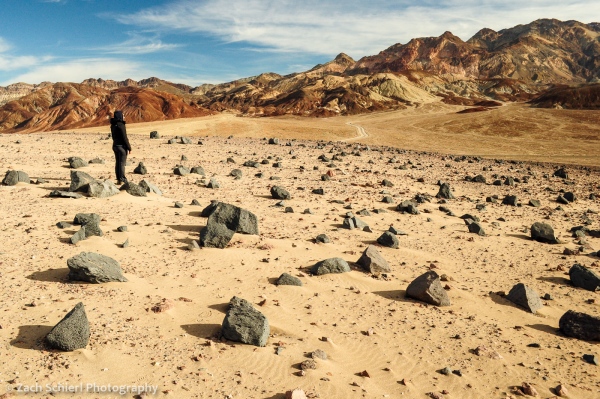 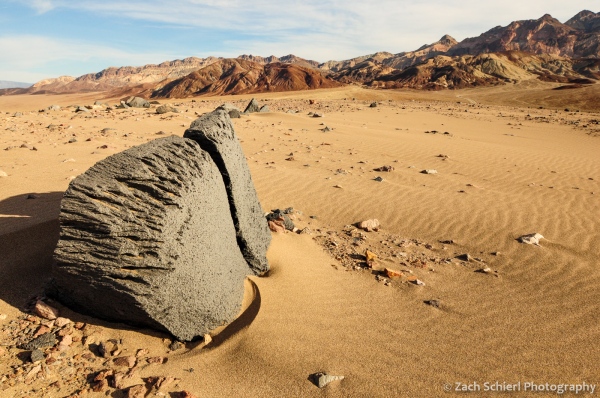 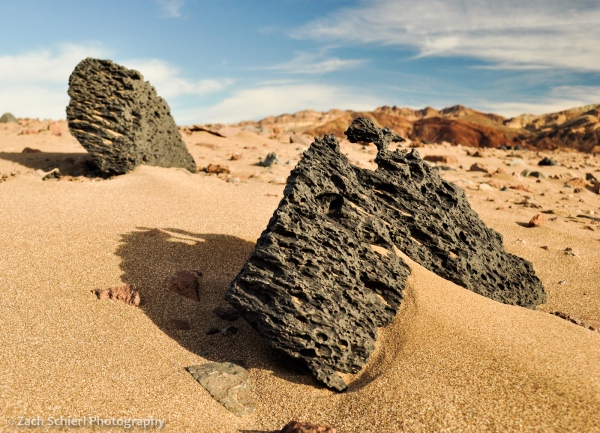 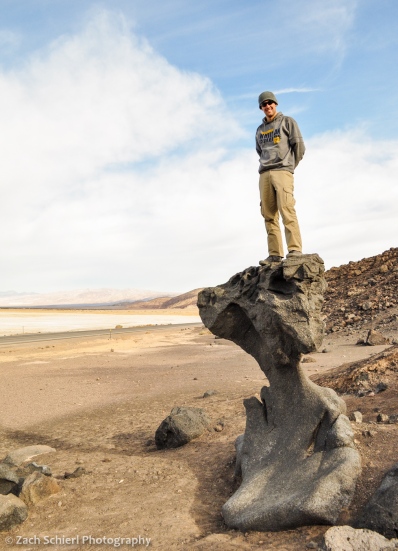 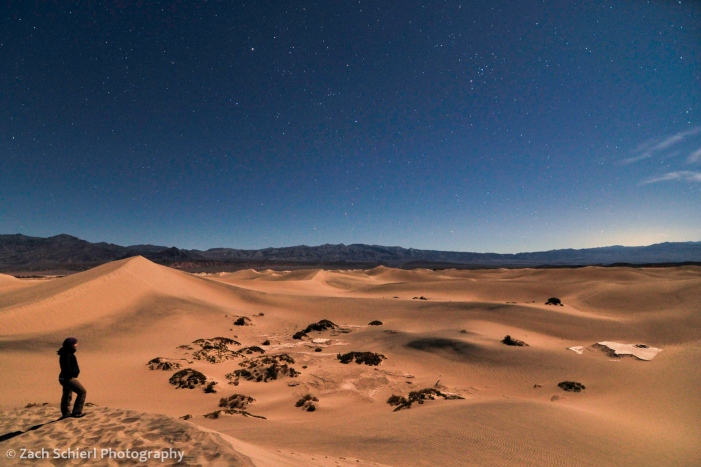 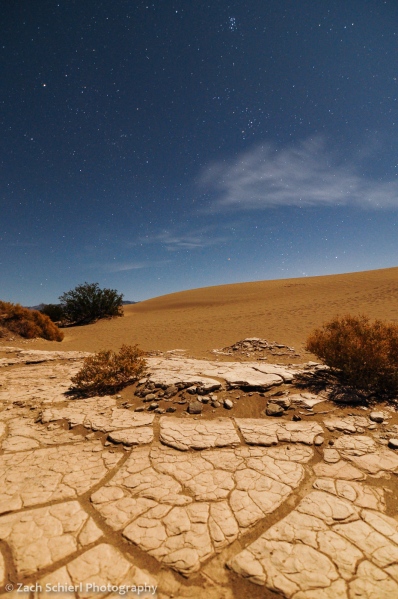 I have decided that there are few things in this world as gratifying as going for a swim on a tropical beach at sunset after spending all day in the field hiking over boot-shredding, leg-puncturing, sunburn inside your nostrils-inducing, lava flows.  Such pleasures occur when one has the opportunity to do geology field work in Hawaii for a week, as I had the fortune of doing this past week as part of my senior thesis project.  Oddly enough, I’m not actually studying Hawaii, but rather water and lava flows on Mars (more on that in a bit).  However, since present-day Mars experiences very little in the way of surface erosion, many of the lava flows there look as fresh as the day they were erupted hundreds of millions of years ago.  Since a field trip to Mars was a bit over the budget for this project (darn government cutbacks…), we instead must resort to trying to find places on Earth with fresh, unaltered lava flows in order to compare, contrast, and understand what we see on Mars.  Hmm…I wonder where could I find some of those?

Hawaii in a nutshell: palm trees growing out of lava flows

Ah yes, Hawaii will do quite nicely, now won’t it?  As luck would have it, Kilauea (the main active volcano in Hawaii) is currently going through a relatively dormant phase.  When I visited Hawaii back in 2008, it obligingly started spewing massive quantities of lava into the ocean a few weeks before our arrival: 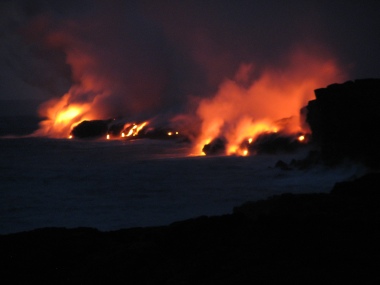 No such luck this time.  This and this happened a few months ago and the volcano’s magma reservoir and  crater has been slowly refilling ever since. (Seriously, watch the videos. And keep in mind that the 1st one takes place over the course of just 24 hours.)   A geologist with the Hawaiian Volcano Observatory told us he though there was a decent, but not great, chance of an eruption during our time there but despite our sacrifice of several geology students to Pele, that never materialized.  We did however get to see the main vent of Kilauea glowing bright orange at night due to a molten lake of lava lying about 150m beneath the surface:

Even if my childhood dream of roasting marshmallows over hot, molten, lava once again went unfulfilled, that sure as heck isn’t something you see everyday.

Anyways, from our base at the Apapane Lodge in the tiny settlement of Volcano, HI, we (myself, three other students, and two geologists) spent much of our time hiking across young (<200 years in most places) lava flows looking at features such as lava tubes, vents, channels, and collapse pits trying to decipher features that we see on Martian volcanoes.  More specifically, the project I am involved in seeks to determine what causes features like this on Mars:

Conventional wisdom says that such features are formed by water, and especially since the Mars Exploration Rovers uncovered chemical evidence that water existed on Mars at some point in the past, this has been the prevailing view for some time.  However, lava is capable of doing some very weird things and more recent work has shown that many of the features that have long thought to have been formed by water are more likely the work of lava flows. So why do we care?  If this is indeed the case, it has serious consequences for our understanding of Mars as a whole.  The presence of channels such as this one has long been one of the key pieces of evidence supporting the idea of flowing water on Mars in the past. If instead these features were formed by lava then we have a lot of questions to ask ourselves, most importantly:  Did flowing water ever exist on the surface of Mars in large enough quantities to carve such channels?  Water, of course, is the key to life (at least that’s what we think…) so figuring out if water flowed on Mars in the past (and if so, how much) is essential for understanding how planets evolve over the long term and for determining if life ever existed on Mars.  The role of water on Mars is also important from a practical standpoint as we try to determine if Mars is potentially a habitable planet for humans in the future.

A typical scene in the field. This is a channel within a large lava flow thought to be analogous to some of the channels we see on Mars. On a side note, I never thought it was possible to completely destroy a perfectly good pair of hikin boots in just four days. Hawaii's infamous "a'a" lave like this proved me very wrong.

The team after a tour of the Hawaiian Volcano Observatory

When you see signs like this, you know you're having fun!

As sad as it was to leave Hawaii, the trip “home” was even less fun.  Given that I arrived in Washington D.C about 10 hrs later than planned and sans any clothing apart from what I was wearing, I hereby nominate American Airlines for the “Worst Airline in the Universe” award.  In addition, when I finally did get my luggage returned this afternoon, all my outdoor gear and camera equipment were intact but all but three of the rock samples I collected in Hawaii (NONE of which were from the National Park before anyone starts harping on me…) were missing.  Explain that one to me…