Boulders to Bullion: A Tour Through the Mayflower Gold Mill

Spend enough time driving or hiking around western Colorado and you will inevitably be introduced to the rich mining history of the area. This is especially true in the San Juan Mountains where it’s hard to hike for more than a few miles without running into an assortment of old and dilapidated mining structures, ranging from head frames covering mine shafts that plunge hundreds or thousands of feet into the mountains, to bunkhouses that still contain the metal skeletons of the rickety old beds slept upon by early 20th Century miners. Most of these buildings have been abandoned; left to slowly decay and disintegrate under the weight of the dozens of feet of snow that accumulate in the mountains each winter. However a handful have been preserved or restored by local historical societies, such as the Mayflower Gold Mill just a few miles outside of Silverton, Colorado.

A mill is an integral part of any mining operation. While Hollywood seems to think that western gold rushes involved a handful of old grizzled, bearded men fishing fist-sized gold nuggets out of streams with their gold pans, the reality is that most of the rock mined in Colorado had concentrations of gold and silver that were best measured in parts per million, and concentrations of other metals like copper or zinc that were only somewhat higher. The purpose of a mill like the Mayflower was to take in this low-grade ore and spit out material concentrated in gold, silver, and a plethora of other valuable metals while leaving the rest of the rock, known as “gangue”, behind.

The crushing room inside the Mayflower Gold Mill.

The Mayflower Mill opened its doors in 1929 and was a technological marvel for its time.  It was the last of the San Juan mills to close, in 1991, long after most of the mines in the area had ceased production. Ever since 1991, while the exterior of the mill has undergone stabilization at the hands of the San Juan County Historical Society, the interior of the mill has been left more or less untouched. The mill closed suddenly; one day it was open for business, the next it was shuttered for good as the prices of gold and silver plummeted and no one ever came in to clean up. Piles of partially crushed ore still lie on stationary conveyor belts, waiting patiently to continue their trip through the mill. Pairs of rubber gloves still lie on counters and railings, now covered with a thick layer of dust. Calendars with pictures of scantily clad women still hang from rusty thumb tacks in offices and control rooms. If all this wasn’t eerie enough, the power went out about five minutes after I entered the mill and from then on the only light source other than sunlight streaming through a handful of windows was the flashlight in my hand. Walking through you would never guess that it’s been closed for only 22 years; the place looks like its been abandoned for a good half-century and much of the equipment looks much older, yet somehow advanced for its age.

The tour through the mill is self-guided and costs $8 which at first seemed steep but ended up being well worth it. Not for the quality of the interpretive signs dispersed throughout the mill (despite the extremely friendly and helpful staff, the signs could use some serious work) but merely for the pleasure of exploring the mill itself, one of the most fascinating man-made structures I’ve ever been inside.  My computer is telling me I have something like 48,000 photos on my hard drive at the moment. I’m willing to bet more than 95% of those were taken outside. Why? Well to be honest, I don’t generally find man-made buildings that fascinating so I’ve never been that much of an indoor photographer. Once in a while, I find myself somewhere like the Mayflower Mill that changes that, at least temporarily 😉 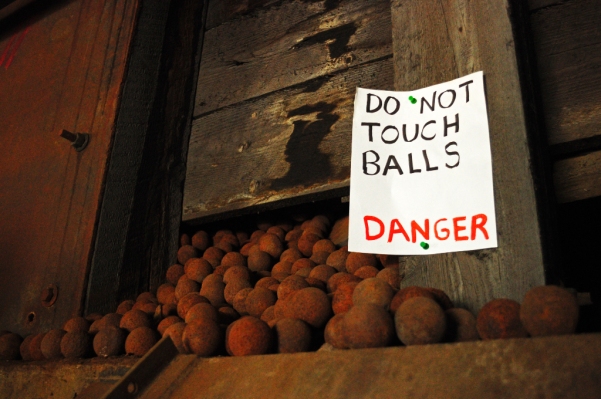 Piles of iron balls were bounced around in large drums to help mutilate the ore into pieces as small as a grain of sand!

While milling ore to produce gold and other metals may seem somewhat alchemistic, in essence the process consists of two phases: crushing the rock into very, very, VERY small pieces, and then using a variety of noxious chemicals to separate the metal from the rock based on their physical properties. Ore would arrive at the mill in large metal buckets that zipped downhill along an aerial tramway that connected the mill to the Mayflower Mine several miles and several thousand feet above the Mill in Arrastra Basin:

A view of the aerial tramway originating from the Mayflower Mine in Arrastra Gulch. The miners would often ride to work in the empty buckets headed back up to the mine. Hard to imagine a commute with a better view!

The crushing is then accomplished using a variety of progressively diabolical looking devices that to this day are covered in rock dust and surrounded by little piles of partially crushed ore that fell off of one of the many conveyor belts snaking through the mill. Normally there are buttons that you can press which turn on some of these devices for a short period of time but this was thwarted due to the aforementioned power outage. This was the device that I would have most liked to see in action:

Pieces of partially crushed ore scattered around the base of an enormous jaw crusher.

The separation occurred in a series of tanks and vats that, while not visually impressive, still seemed to reek of the boiling concoction of lead and cyanide they once contained. My gut feeling was that hanging around this part of the mill for a long time would probably be a bad idea. The final product was rich-enough in gold that access to the areas where the final stages of separation took place was restricted to only a handful of employees who were continuously monitored by a network of security cameras. Unbelievably, even after all this, the ore would still need to be sent to a smelter for further purification and processing before pure gold bullion, or other metals were obtained.

Here are a few more random pictures from inside the Mayflower, which truly is a photographer’s dream, ESPECIALLY when the power is out. I was so caught up in taking pictures inside that I completely forgot to get a picture of the mill from the OUTSIDE!

Piles of old equipment in a dark corner of the mill. Actually, since the power was out when I visited, just about the whole place was dark…