So this is a taaaaad late, again, but since my shameless self-promotion retrospective was somewhat popular last year, I figured it was worth making another post highlighting my favorite images from the past year, even if it is now nearly a month into the new one. In honor of 2012, I chose my 12 favorite photos. This year I’ve chosen just ten, so as not to head down a road where this post gets ever so slightly longer and more agonizing to read each year.

As was the case last year, some of these photos you may have seen already if you follow me. Including some new images wasn’t difficult though, considering that I took an average of 1478 photos per month this past year, yet averaged just 1.5 posts per month. That adds up to 17,736 photos in the past year (a 221% increase over last year!). With the end of grad school in sight, hopefully I’ll be able to share photos more frequently this coming year, but for now I now humbly present my favorite (not necessarily for technical quality) 0.05% of the photos I took in 2013:

One of the things I dislike about the Pacific Northwest is that there are so many damn trees everywhere that even hiking to the crest of ridges and mountains in search of an expansive view is often a futile endeavor, especially in the lowlands. Unless that is, your summit has had the pleasure of being clear-cut in the past decade or so, in which case you can see halfway to Alaska (if it’s clear…).  I was surprised to find myself in one of these clearings on a January hike outside Bellingham following one of our biggest snowfalls of the year and took advantage by taking in a nice view (and some photos) of Mt. Baker and the foothills, alas one complete with more of the aforementioned clear cuts in the foreground. 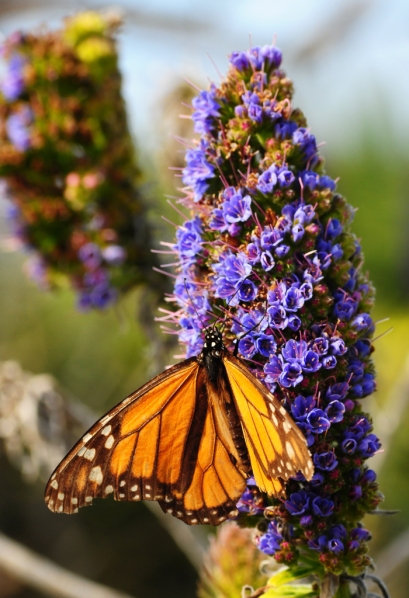 The town of Pacific Grove, California loves their butterflies. Monarch butterflies specifically. So much so that an image of one can be found on every street sign. In March I visited the official Monarch Grove Sanctuary where thousands of monarchs flock to reproduce each year. While I don’t doubt this claim, on my visit I saw about a dozen butterflies, none of which where in range of my camera. I found this one downtown, along the beach, in a much more accessible location. I’m not sure what this guy is eating but it looks delicious.

This was one of the few shots on this list that actually had some degree of planning behind it. I had recollections of a good vantage point of the bridge from trips to San Francisco made pre-camera toting days. Fog had been rolling in and out of San Francisco all day but it  seemed to be a thin layer and I surmised that if I could get above the clouds, I might be treated to a dramatic view of the bridge’s towers poking up above the fog where they could intercept the last rays of sunlight.  As you can see, that’s pretty much exactly what happened. It’s incredibly satisfying when hunches work out that perfectly. I only wish I had possessed one of these suckers so that I could have increased my exposure time and smoothed out the rapidly moving fog. If anyone is looking for a belated Christmas present or a donation, hint hint… 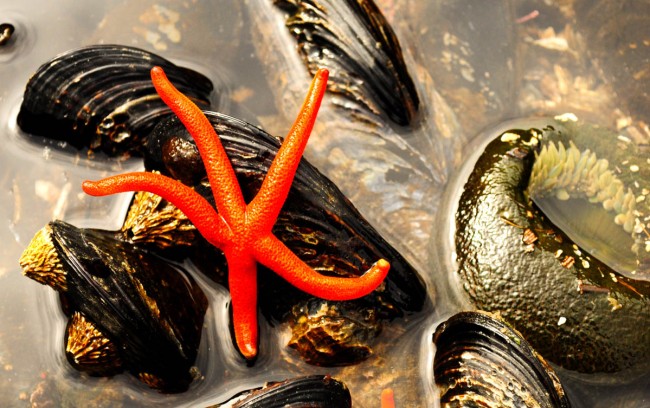 While I like this picture enough to have a 5×7 framed on my bookshelf, it was the experience associated with it that makes it worthy of inclusion on this list. Back on Memorial Day weekend, I headed out to the Olympic Peninsula (oddly enough, not to look at sea stars but rather the Elwah River restoration project) and happened to stumble across some epic tide pools one misty morning. We’re talking sea stars comparable in size to small children, anemones and urchins the size of bowling balls, and masses of gargantuan mussels sufficient in size to keep the aforementioned sea stars fat and happy. Despite it being a holiday weekend and one of the lowest tides of the year, there were only a smattering of people wandering around the tidal zone.  I spent several hours taking photos in a steady rain while balancing the need to keep my camera dry AND myself from slipping on kelp and splitting my skull open on jagged basalt. Several groups approached me during this time and asked me if I was local and how I had found about this place. After responding “Uhh, not really…” and “the Internet”, I proceeded to have a few nice conversations about the incredibly diversity of marine life in front of us. What was interesting was that each and every group urged me to keep this location a secret before continuing on their way. And given that other spectacular tide pools in Washington have suffered from over-popularity, I’m going to honor that request. 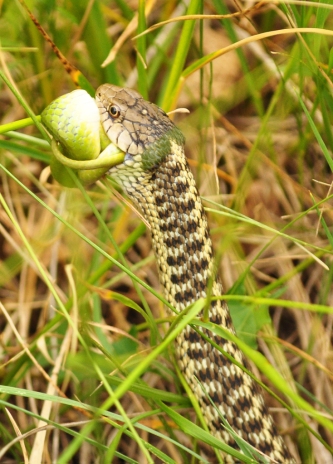 Any year in which you get to photograph wildlife eating other wildlife is a darn good year in my book, even if it is only two snakes rather than say, a mountain lion taking down a deer in full stride.

If you ever want to visit a National Park in the summer and don’t want to feel like you’re at Disneyland, you’d be hard pressed to find anywhere more spectacular than Black Canyon. Think you could go to the Grand Canyon or Yosemite and have a major overlook all to yourself at sunset in mid-summer? Think again. In case you didn’t notice, lurking just above the far right horizon in this photo is the 2013 Supermoon for an added bonus. 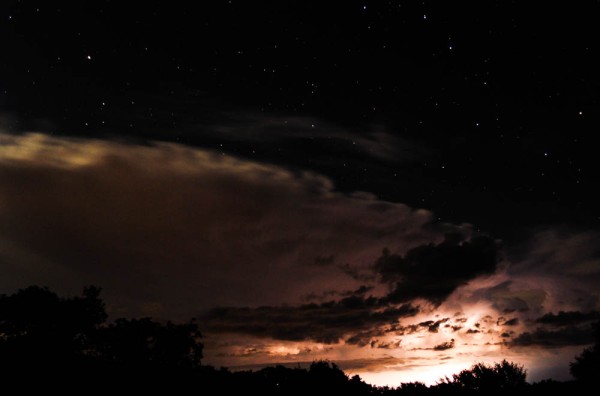 7. Lightning and the Big Dipper.

I had to include at least one night sky shot in this list (its part of my contract). Neither subject here (lightning and the Big Dipper) is particularly interesting on it’s own, but I think together they make a nice pair. I really would have loved a wider-angle lens on this one; I had to wait about an hour longer than I would have liked for the Big Dipper to rotate into the field of view of the cloud tops, and by then the best of the lightning storm was past. I also wish there was something more interesting in the foreground but achieving that would have meant leaving my front porch, something that I was very loath to do on this particular evening for obvious reasons. As nice as a intriguing foreground would have been, being alive to share this photo is even sweeter. 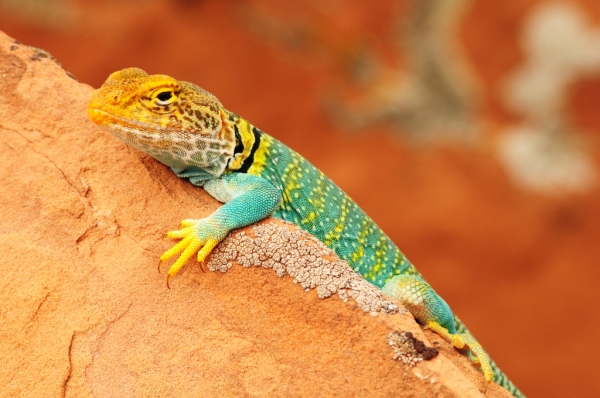 I’ve come across these flamboyant lizards more than a few times in the southwest. Normally they peace out as soon as you get within 10 yards or attempt to intimidate you from coming closer by launching into their patented push-up routine. This one seemed to want his picture taken though. Almost motionless for several minutes, I reeled off a couple dozen shots trying to get the focus just right.

Another shot that involved a fair bit of planning. Ouray, CO might be about the most picturesque town this side of the Alps. Back at the beginning of the 20th century, some yahoos thought that a big metal, light-up marquee advertising one of Colorado’s most famous natural wonders (Box Canon) would somehow be a good idea. Thankfully, the lights on this metal monstrosity have since gone dark and nowadays the sign is barely visible from town unless you know where to look. But the sign’s location on a precipice above town makes for a great sunset vantage point, especially following an intense summer thunderstorm which left some wispy clouds hanging around the amphitheater to catch the last rays of sunlight. 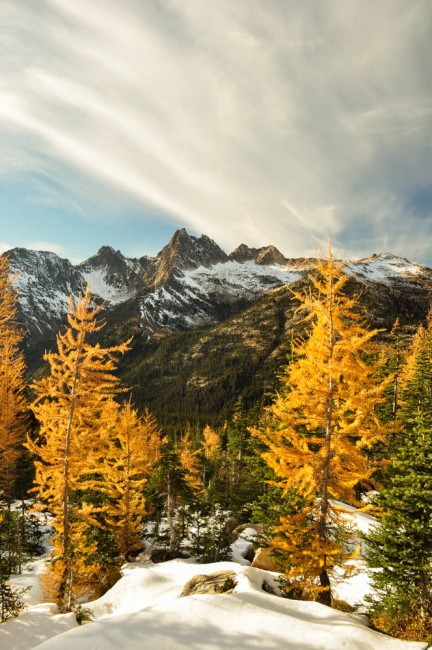 10. (Golden) Western Larches, North Cascades, Washington.
Since I just wrote about this trip a few months ago, I won’t say much here…other than that I hope you enjoyed these photographs, and I would love to hear your comments or criticism in the comments below! Happy (belated) New Year!

This entry was posted on January 31, 2014 by Zach Schierl. It was filed under Colorado, Miscellaneous, Washington and was tagged with 2013, Colorado, photography, top 10, Washington, year in review.