The Spectacular San Juans: A Trip to Yankee Boy Basin

Taking in the scenery

Note: I’m reaching back into the archives here. I have about 10 posts in my drafts folder, all in various stages of completion and many from this past summer, that I’ve decided it’s finally time to post. This is one of them. And yes I know this is my 2nd consecutive post with glacial and geological undertones. I’m not sorry, glaciers are totally radical man!

On my lifetime list of most spectacular landscapes, Yankee Boy Basin in the San Juan Mountains ranks quite high. I’ve seen expansive fields of wildflowers with different species spanning every color of the rainbow plus some. I’ve seen 100 foot high waterfalls that have undoubtedly been the setting for numerous Coors commercials. I’ve seen craggy, majestic mountain peaks and pinnacles sculpted over millions of years by the work of a posse of many abrasive glaciers. I’ve seen aqua blue lakes appear seemingly out of nowhere as they fill from the meltwater of a lobate rock glacier. I’ve seen ribbons of crystal clear snow melt water plunging in an endless stream of cascades straight down the side of a mile wide glacier cirque. Never though have I seen all these things in one place. Yankee Boy Basin truly has it all. It rivals anything I ever saw in the mountains of New Zealand. Throw in the fact that I saw up-close and in person just about every glacial and periglacial feature I learned about in geomorphology class and it doesn’t get much better. Miraculously, you can actually get here with minimal effort, especially if you have a 4WD vehicle (or, in our case, the ability to rent one), and don’t mind driving on roads that look like this: 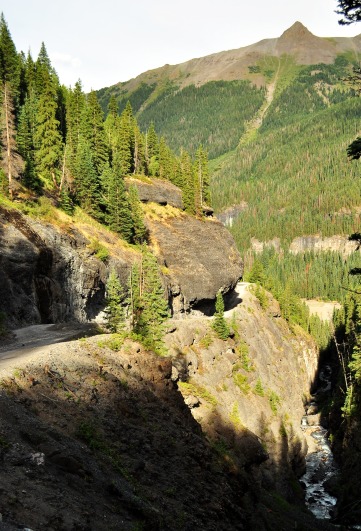 Mind you, merely walking around on a level surface at nearly 13,000 feet involves a fair bit of effort and energy expenditure.  Altitude acclimatization definitely makes things easier but even then, running around in excitement is definitely not recommended since I imagine the scenery would not be as greatly appreciated if you are passed out on the floor of the basin. Amazingly, over 1500 individuals each year blatantly ignore this advice during an annual 17 mile footrace up and over nearby 13,114′ Imogene Pass.  In an additional twist that can only be explained as a classic example of male one-up-manship, in the early 1990’s, some folks decided that running 17 miles at extremely high altitude was not torturous enough and thus the Hardrock 100 was born.  Participants in this masochistic race traverse 100 miles of rough terrain at an AVERAGE elevation of over 11,000 feet, climbing up the passes and peaks in the vicinity of Yankee Boy Basin.  The total elevation gained and lost during the race is a mind-boggling 67,984 feet. Yeah, altitude does crazy things to people. 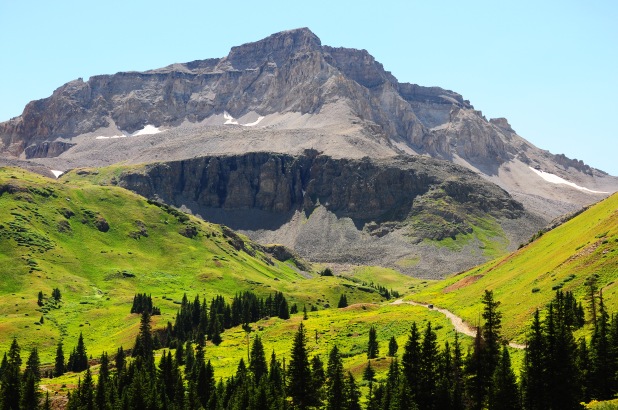 Trail headed up to Wright’s Lake

One of the neatest features of Yankee Boy Basin is a 50 yard wide body of water called Wright’s Lake.  Wright’s Lake is bounded on the east by a terminal glacial moraine which forms a small ridge meaning that the lake does not come into view until you are practically wading into it. I had not seen any pictures of the lake prior to the hike so I was unsure what to expect. After smoking my little brother up the short trail from the road, I came around the edge of the moraine to see an enormous rock glacier flowing down from Gilpin Peak 1000 feet above me and terminating at the edge of an aquamarine blue lake, a sight which exceeded even my most hopeful expectations. The sight of a lake sourcing a not-insignificantly sized stream with no immediately obvious source of replenishment is an odd one indeed until you realize that the wall of talus on the far side of the lake is cored with ice.

Rock glaciers are interesting beasts. They are essentially glaciers covered with a layer of rock that serves to insulates the ice which continues to flow downslope under the influence of gravity. To completely cover a glacier in rock, one naturally needs a lot of rock. The peaks in the San Juans generally consist of extremely crumbly, scuzzy volcanic tuff and ash deposits. Gilpin Peak, the summit from which the rock glacier descends, is no exception as it looks like the whole mountain could slough off into the valley during the next stiff breeze. Debris from the peak above the glacier falls from the sheer cliffs ringing the basin and accumulates on the surface of the ice. The insulating effect of the rock has allows these small remnants of ice (the San Juans were home to much more extensive glaciers during the most recent glacial period) to survive here even though the current climate in the San Juan’s is too warm and dry for traditional glaciers to survive.

From Wright’s Lake, it is about 1.5 miles and another 1500 feet up to the summit of Mt. Sneffels, one of Colorado’s famous 14ers (peaks over 14,000 feet high) and one that is not on anyone’s list of “easiest to climb”. On this day, the notoriously nasty conditions on the summit of Sneffels was apparently even from a quarter mile below. From the lake you could easily hear the wind whipping around on the summit ridge and thunderstorms were approaching from the west.

As I finally get around to finishing this post in early January, I am struck by the thought of how this amazing landscape is now buried under many, many feet of snow. While I am sure that the San Juan’s are equally inspiring in the winter, perhaps even more so to many people, thinking about this gives me an even greater appreciation for such places, given just how short of a window we have each year to experience alpine landscapes such as this one. The winter of 2011-2012 was an incredibly dry one in Colorado, and many places such as Yankee Boy Basin were mostly snow-free and accessible by May or June. In a normal snowfall year, vehicle access to these high altitude basins is often impossible well into July or even August, leaving potentially as little as 6 weeks before next winter’s snows begin to reclaim the land once again.