While Zion National Park may not normally be known for its waterfalls, spring snow runoff and the occasional summer monsoon thunderstorm can turn the park and its stunning red and white sandstone cliffs into a veritable Yosemite of incredible waterfall action.

I made a brief stop in Zion as part of a 1200 mile drive from Washington to Arizona for the holidays.  I had visited Zion in the past during the spring when runoff from the high country surrounding the canyon was at its peak but despite the fact that the entire western United States had been getting hammered by a massive cold front for the past 2 days, I never expected to see the number of waterfalls that I did.  Not only were they more numerous then ever before, even the relatively reliable ephemeral waterfalls, such as the one near the parking area at Temple of Sinwava, flowed with significantly greater gusto that I had ever seen before.

Waterfall at Temple of Sinawava

For an interesting comparison, here’s a shot taken from almost exactly the same spot (notice the bare tree on the left is the same as the tree on the right in the previous photo) in the summer of 2009.

Perhaps the most spectacular waterfalls were those found in the small alcove that is home to Weeping Rock.  A short but wet hike up the Hidden Canyon Trail provided a vantage point of these falls.  Getting decent photographs was a challenge.  With heavy rain, wind, and nearly 100% humidity, it was next to impossible to keep rain off the camera and keep my lenses from fogging up. 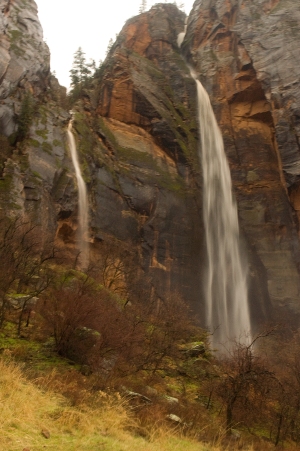 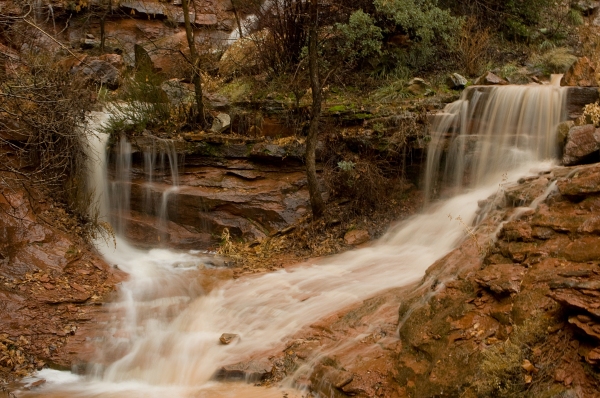 Runoff along the Hidden Canyon Trail

Hazy view out into Zion Canyon from Weeping Rock

The day after these photos were taken, the entire Park was shut down and evacuated due to severe flash flooding, road washouts, and the threat of a dam failure upstream on the Virgin River.