The second stop on our Alaska trip of 2019 was Wrangell-St. Elias National Park & Preserve. The largest national park in the United States, Wrangell-St. Elias spans more than 13 million acres in the wilderness of southeast Alaska. Our destination was the old mining town of Kennecott, situated deep in the park’s interior between the volcanic Wrangell Mountains and the coastal St. Elias Range.

Due to the tire issues mentioned in my last post, we opted not to take our Subaru down the 60-mile long McCarthy Road, the main access route into the park. In hindsight, we probably would have been fine, as the road was in excellent condition (at least relative to the roads we’d been used to driving in Utah. The similar-in-length Hole in the Rock Road makes the McCarthy Road look like a recently-paved superhighway). Fortunately, we were able to book a last minute van shuttle from Kenny Lake, AK to the end of the McCarthy Road. Regardless of your mode of transportation, you then walk across a footbridge spanning the glacial silt-laden Kennicott River into the town of McCarthy. (The only vehicle access to McCarthy is via a private, and very expensive, bridge a bit further downstream.) Kennecott is another 5 uphill miles by shuttle, bike, or foot:

Kennecott, Alaska. The 14-story wooden concentration mill is seen in the background.

Strangely, reaching Kennecott would have been much easier in 1919 than it was in 2019. The McCarthy “Road” is actually an old railroad grade originally built in 1909 to bring supplies in and ore out of the famous Kennecott Copper Mines. From 1911 through the late 1930s, the Kennecott mines shipped millions of tons of copper ore to Cordova on the Alaska coast via the Copper River and Northwestern Railway. The town had state of the art amenities at the time, including one of the best hospitals in the territory as well as the first X-ray machine in Alaska. While the mines closed in 1938, Kennecott Copper remains one of the larger copper-producing companies in the world, perhaps best known for the massive Bingham Canyon Mine just outside of Salt Lake City.

Following the closure of the mines, Kennecott lay mostly deserted for decades before beginning to draw tourists in the 1980s. Much of the land and buildings within the town were acquired by the National Park Service in 1998 and added to Wrangell-St. Elias National Park and Preserve. Restoration and stabilization of historic buildings in Kennecott is ongoing. Today, you can actually explore many of these buildings, including the town power plant (photo below) and the massive concentration mill (photo above), a 14-story wooden structure where copper ore was crushed and then mechanically and chemically concentrated into the high grade ore that was eventually shipped out via the railroad.

The interior of the Kennecott Power Plant, with massive boilers used to produce electricity and steam heat for the mines and town residents.

History aside, the natural landscape of Kennecott is really what makes it stand out as one of the most stunning places I’ve ever visited. The town is perched on the flanks of Bonanza Ridge, with rocky peaks towering more than 4,000 feet above and what remains of the Kennicott Glacier below. At first glance, it is not apparent (even to a geologist) that the mounds of rubble in the valley below ARE a glacier, but ice does lay beneath the veneer of debris. Like most of the world’s alpine glaciers, the Kennicott Glacier has retreated dramatically since the town’s heyday in the early 1900s, when its surface was level with or even above the elevation of the town. Today, you look down several hundred feet on to what remains of the glacier and the detritus it has brought with it out of the mountains. The origin of the glacier, and the dominant feature of the northern skyline, is the massive Mt. Blackburn, the fifth highest peak on the United States at 16,391 feet:

Old mining buildings in Kennecott cling to the slopes above the debris-covered Kennicott Glacier, which originates on the slopes of Mt. Blackburn, seen in the background.

A few miles north of Kennecott, the Kennecott Glacier is joined by the Root Glacier, a somewhat more “normal” looking glacier that we spent nearly an entire day exploring. The experience was rather surreal given that the air temperature was nearly 90 degrees. Climates amenable to the formation of glaciers don’t often produce days where a swim in the frigid glacial melt water actually sounds appealing as opposed to horrifying, but that was certainly the case on this day.

As spectacular as the glacier was, there is something quite unsettling about walking around on one in a T-shirt. The signs and symptoms of a warming climate were all encompassing. We walked along deep gouges (surprisingly reminiscent of Utah slot canyons) carved into the ice by strong currents of melt water… 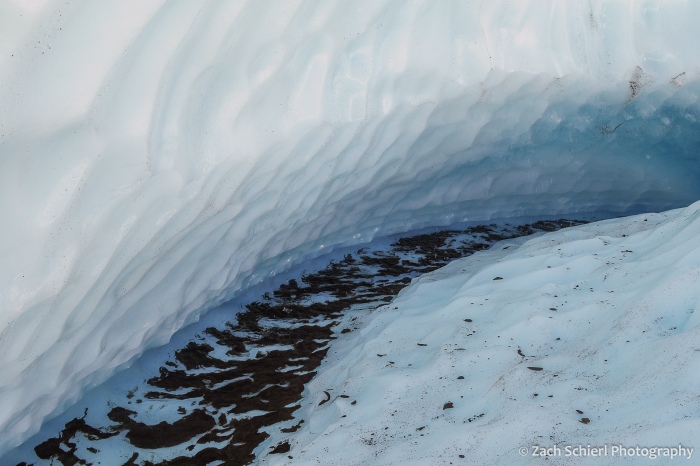 and carefully avoided deep shafts, known as moulins, that carry cascades of melt water into the internal plumbing of the glacier. In many places, we could hear the dull roar of the melt water boring tunnels through the ice beneath our feet. Glaciers like Root won’t survive many more summers with too many days like this one.

Despite the best efforts of the interpretive signs displaying historical photographs, and the park film showing the sights and sounds of the past, the sheer remoteness of Kennecott in 2019 makes it difficult to imagine the Kennecott of 1919: a busy town immersed in the deafening roar of copper mining, with a glacier not yet ravaged by climate change dominating the horizon. 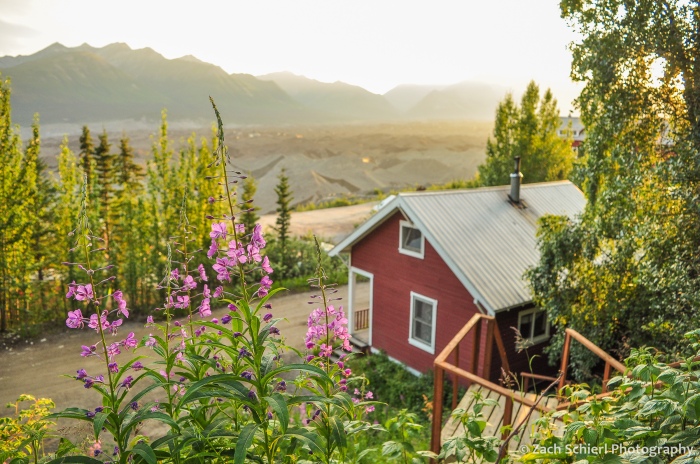