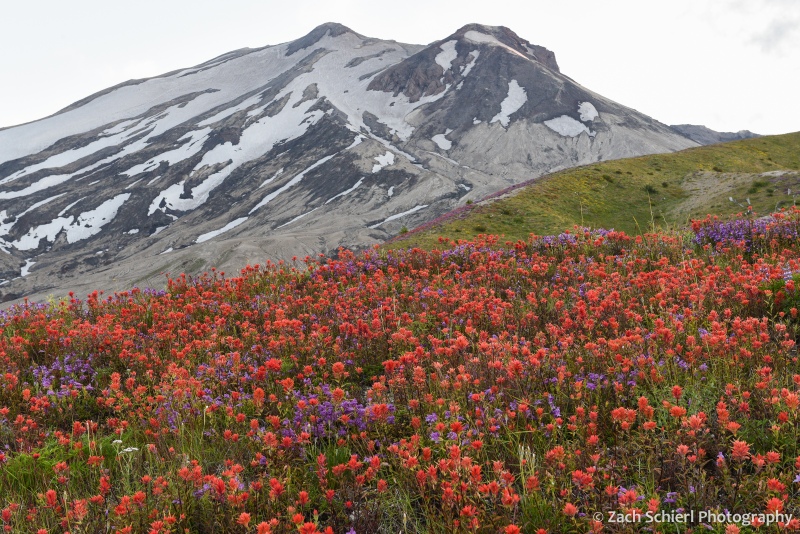 This past May marked the 40th anniversary of one of the most significant natural disasters in U.S. history: the 1980 eruption of Mt. St. Helens. 2004 to 2008 brought another series of eruptions, but today Mt. St. Helens is quiet. Stratovolcanoes such as Mt. St. Helens generally provide some degree of warning (often in the form of earthquakes or surface deformation) before erupting. Given that Mt. St. Helens is one of the most closely monitored volcanoes in the U.S. (if not the world), the lack of activity in recent years has once again made the surrounding landscape a recreational destination.

The northeast side of Mt. St. Helens is just a few hours from our front door, accessed via a series of forest service roads that, while technically paved, are in such poor condition that one pines for the sweet rhythm of dirt washboards. Much of the land most directly affected by the 1980 eruption is protected as the Mt. St. Helens National Volcanic Monument, established two years after the eruption. Camping and off-trail travel is restricted across a large swath of the monument to allow scientific study of how the landscape evolves post-eruption, with minimal human disturbance. Recently, we took a short backpacking trip to the northeast flank of the mountain, where camping is allowed, but where recurring volcanic activity has still left the landscape relatively devoid of tall vegetation. The result is spectacular views of Mt. St. Helens itself and the surrounding terrain (and, it turns out, any bright comets that happen to be gracing the skies.)

This was my third visit to the area but first in about 10 years. My previous visits had been in late summer and early fall, when the only wildflowers to speak of were some hardy stalks of late-blooming fireweed. On this visit, in early July, the grassy slopes of the lower mountain were awash in what can only be described as a riot of wildflowers. Paintbrush and penstemon dominated the scene, resulting in slopes that glowed red and purple from miles away and absolutely lit up at sunset and sunrise. It was truly one of the most spectacular wildflower displays I have ever seen! 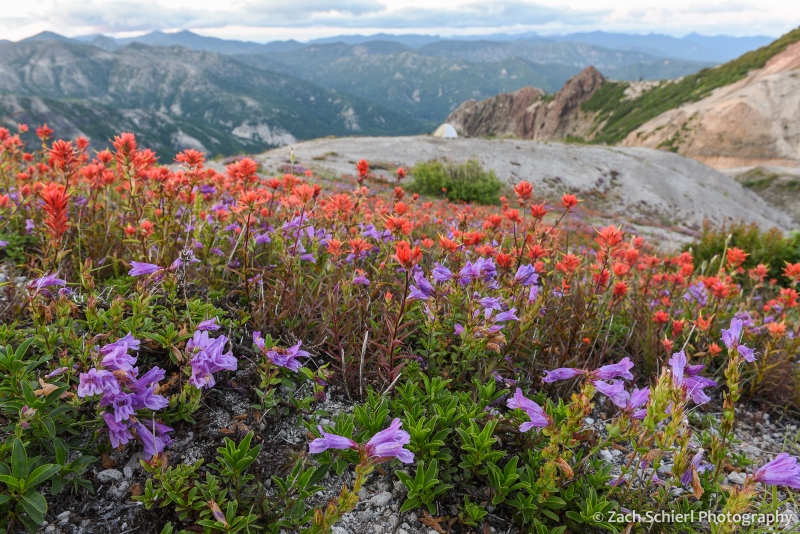 We settled on a campsite located on a small, barren ridge of pumice and ash where we could set up for the evening without impacting the gorgeous display all around us. Shortly thereafter, a handful of mountain goats came wandering through…with a good deal less regard for the wildflowers. While this was slightly concerning at first, as mountain goats can be aggressive, they seemed to be enjoying the buffet too much to notice our presence. We watched them slowly eat their way up-slope behind our campsite for well over an hour (as we somewhat nervously heated up our cans of soup and baked beans, while hoping that they continued to find the scent of the penstemon more attractive) before they finally bedded down on a distant ridge for the evening. 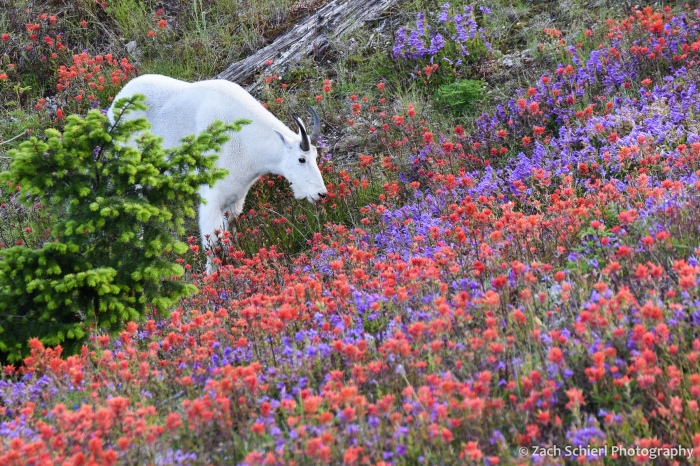 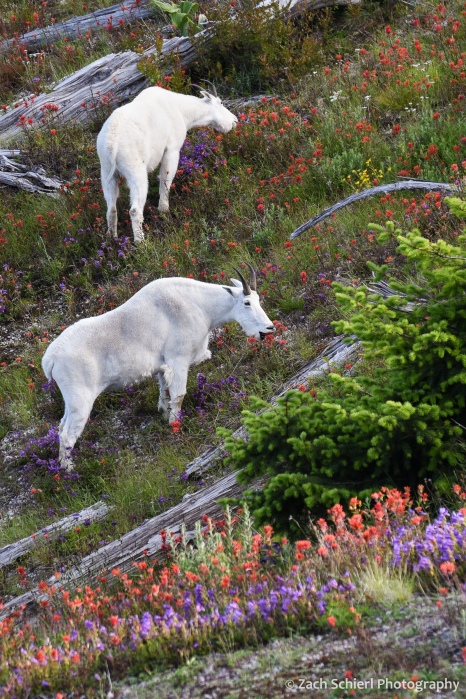 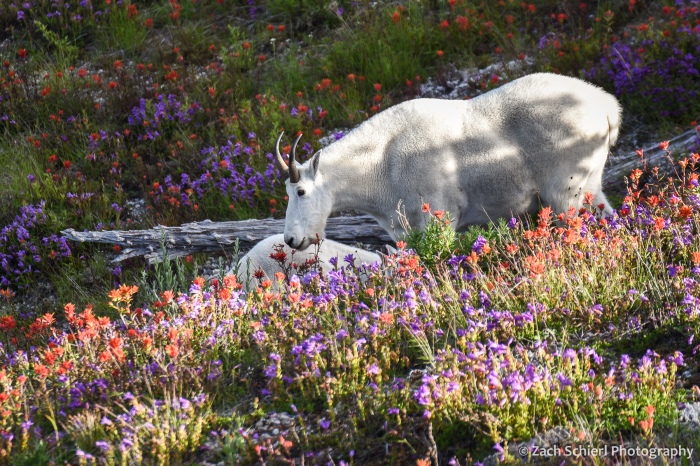 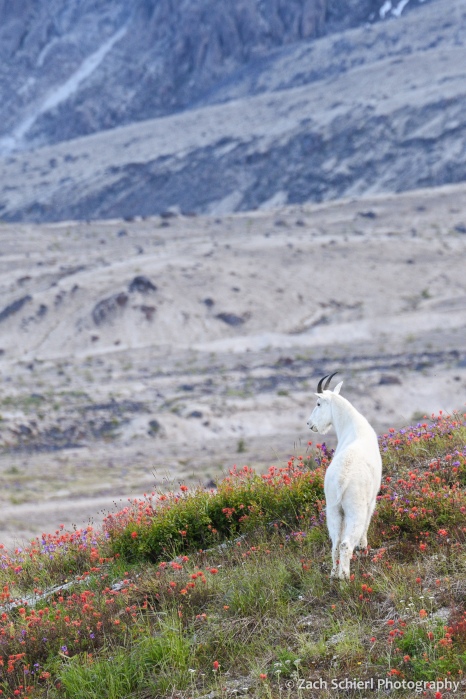 On just a few hours of sleep, we hiked back out to our car the next morning and enjoyed some day hikes to the north of Mt. St. Helens over the next two days. This area provides the best vantage point for viewing the effects of the 1980 eruption. The blast reduced the elevation of Mt. St. Helens by over 1,000 feet, replacing the formerly sharp summit with a massive crater. Part of the crater has since been filled in by a lava dome extruded in the months following the eruption, and again during the eruptive sequence of 2004-2008. Another dramatic feature of the landscape is Spirit Lake. This once idyllic destination was directly in the path of the eruption on May 18, 1980. The massive landslide associated with the eruption filled in a large portion of the lake with debris, pushing the entire lake northward and raising the water level by about 200 feet, burying numerous buildings, camps, and, unfortunately, Mt. St. Helens Lodge owner Harry Truman, who had steadfastly ignored evacuation orders in the weeks leading up to the eruption. To this day, a massive raft of logs floats on the lake surface, the remains of trees uprooted in the 1980 eruption. 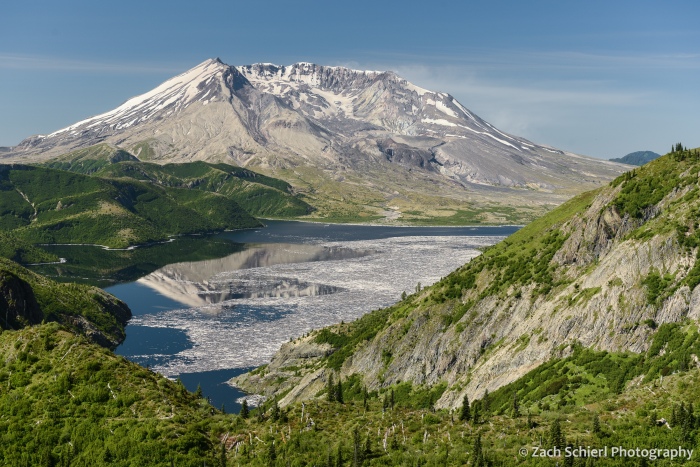 Mt. St. Helens from Bear Pass. In the foreground is Spirit Lake, covered with floating logs: the remains of trees uprooted by the 1980 eruption of Mt. St. Helens and washed into the lake. 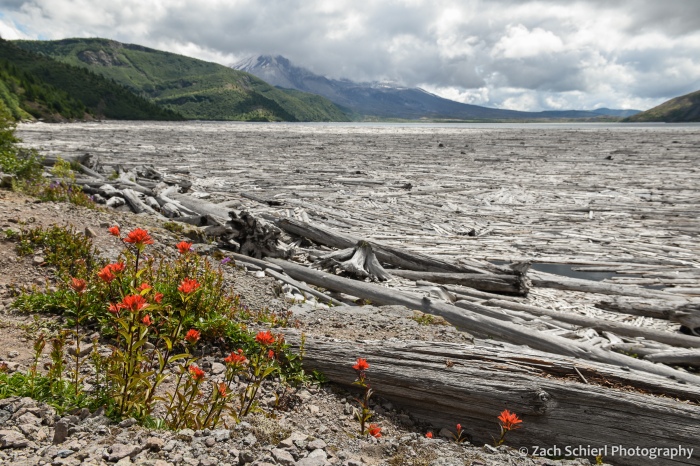 The log raft as seen from lake level at the end of the Harmony Trail, the only legal access to the shore of Spirit Lake.

As a geologist, I find the landscape around Mt. St. Helens endlessly fascinating. Changes since my last visit 10 years ago were clearly visible in many places. Mt. St. Helens is the most active of the Cascade volcanoes and will certainly erupt again. Perhaps nowhere is it more clear that the current configuration of the Earth’s surface is ultimately temporary.