Naked-eye comet alert! Comet C/2020 F3 (NEOWISE), discovered back in March, has brightened to the point where it is visible to the naked-eye in the pre-dawn sky. Both the comet and its tail were easily visible to the naked eye about one hour and fifteen minutes before sunrise this morning:

This is the first time in ~20 years of skywatching that I can recall seeing a comet and its tail with the naked eye. (Western Washington’s persistent clouds and 49°N latitude stymied my attempts to see Comet PANSTARRS in 2013.) Such comets are relatively uncommon, making it well worth the effort to get up to see this one.

Here’s how to see it yourself:

Look northeast 75-90 minutes before local sunrise. You’ll need a relatively clear horizon in that direction. For most locations in the United States, the comet will be no more than 10 degrees above the horizon at this time. A large tree 200 yards away was enough to block the view of the comet from my patio, forcing me to take a short stroll through the neighborhood to find a better vantage point. The comet is small, but for at least the next few mornings should be readily visible. Here’s a wide field view to give you a better sense of the comet’s apparent size: 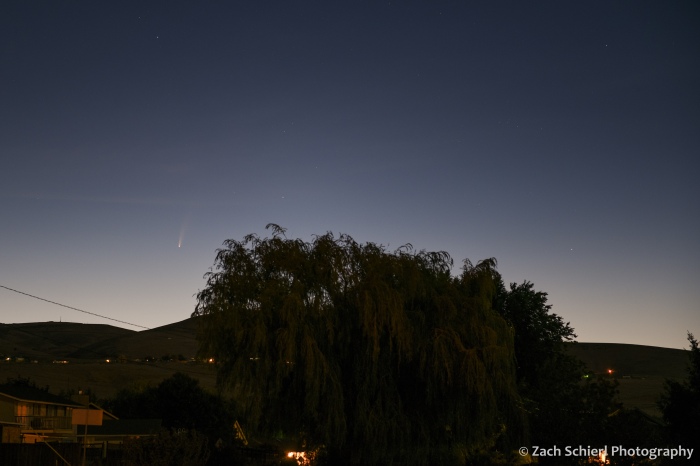 Timing is key. My experience is that the comet is best seen about 75-90 minutes before local sunrise. Too much earlier and the comet will be too low in the sky to see clearly. Too much later and the brightening dawn sky will render it invisible. This morning, by about one hour before sunrise, the comet had become much more difficult to pick out and the tail was barely visible to the naked eye. By 45 minutes prior to sunrise, the comet was no longer visible to the naked eye at all (although it was still visible in binoculars or a camera).

Since you’ll be observing in twilight, light pollution conditions shouldn’t make much of a difference here; this comet should be visible even from urban areas, provided you have a clear northeast horizon and time your attempt correctly. A pair of binoculars greatly enhances the view. For more detailed information on viewing Comet NEOWISE, check out https://earthsky.org/space/how-to-see-comet-c2020-f3-neowise

Now for a bit more on what you are seeing and how the comet’s appearance might change over the coming days and weeks:

Comets are city-sized “dirty snowballs” made mostly of ice and rock. They are leftovers from the formation of our Solar System and orbit the Sun on highly elliptical paths. Comet NEOWISE takes several thousand years to complete one orbit of the Sun. While comets spend most of their time in the cold outer solar system, when they approach the Sun they are heated by solar radiation, causing ices on the comet to begin sublimating (turning from a solid into a gas). This creates a temporary atmosphere surrounding the comet nucleus known as the coma. That’s the bright part of the comet you see in the close-up below. A stream of ionized gas “blown” off the comet by the solar wind can form a tail, while dust particles left behind the comet can form a second tail. As you can see in the close-up, Comet NEOWISE does appear to have two distinct tails at the moment.

NEOWISE made its closest approach to the Sun back on July 3rd and is now on its way back into the outer solar system. Typically, as comets move away from the Sun’s heat, they dim. So far though, NEOWISE appears to be bucking the trend. This is exciting because while the comet is moving away from the Sun, it is moving closer to us. It will reach its closest point to Earth by about July 22nd. If the comet can maintain its brightness for just another week or two, the show could get even better. Now is still the time to look though. The comet will be visible in the morning sky for just a few more days before it disappears into morning twilight. It will reappear in the evening sky by mid-July. Here’s hoping it is still bright enough to see by then. If so, we can all enjoy its presence without having to get up at 3:30 AM!

This entry was posted on July 8, 2020 by Zach Schierl. It was filed under Astrophotography, Comets, Science, Washington and was tagged with astronomy, comet, comet NEOWISE, NEOWISE, photography.