Sands and Sage in Central Washington 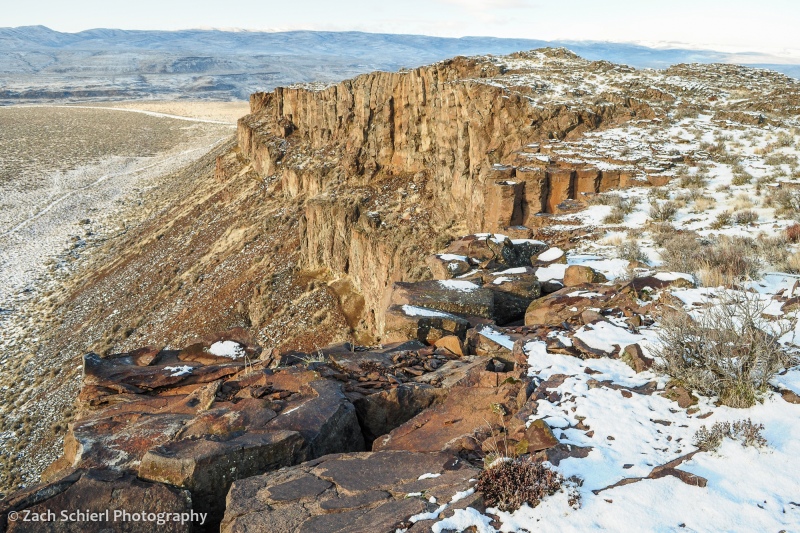 Layers of basalt form the rim of Echo Basin, a large coulee in central Washington.

Apparently a global pandemic is what it takes for me to have time to post new photos. We are thankful to be healthy and safe here in Washington and hope you are as well. Just before things started getting rough, we were excitedly welcoming the end of winter’s icy gray grip and had begun exploring the desert landscapes of central Washington.

The Pacific Northwest may not be known for its sand dunes but about one hour north of the Tri-Cities (Kennewick, Pasco, and Richland) lies the Juniper Dunes Wilderness Area, a ~7,000 acre BLM-managed anomaly in the middle of privately-owned central Washington farmland. The dune field itself extends well beyond the wilderness area, and is used heavily by off-highway vehicles. Most of the year, reaching the wilderness area on foot requires a several mile sand slog through the OHV area. Fortunately, in the spring months, the owners of an adjacent ranch allow access through their property, permitting direct and quick access to the heart of the dune field. 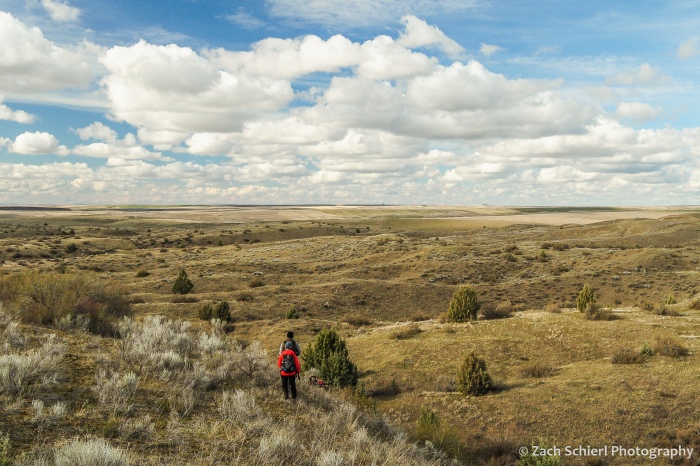 Large swaths of the Juniper Dunes are mantled with sagebrush and grasses, as well as some of the northernmost juniper trees in North America.

I first visited the Juniper Dunes on a geology field trip a decade ago and it is been on my list of places to revisit ever since. The dunes are a mix of active, shifting, barren sand, and partially stabilized dunes covered in grasses, moss, and sagebrush. The area also represents the northernmost extent of the western juniper (Juniperus occidentalis), a few of whose berries will be proudly featured in an upcoming brew from the Pyroclastic Pixels brewery. 🙂 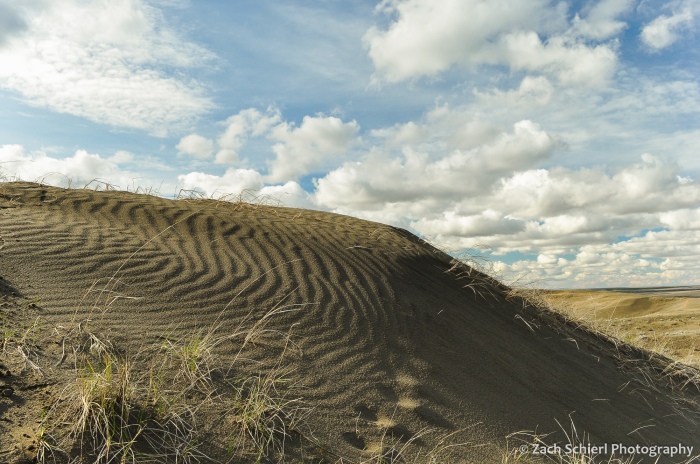 During our visit at the beginning of March, the first vestiges of spring were appearing: namely, abundant sunshine and a handful of small wildflowers poking their heads out of the sand: 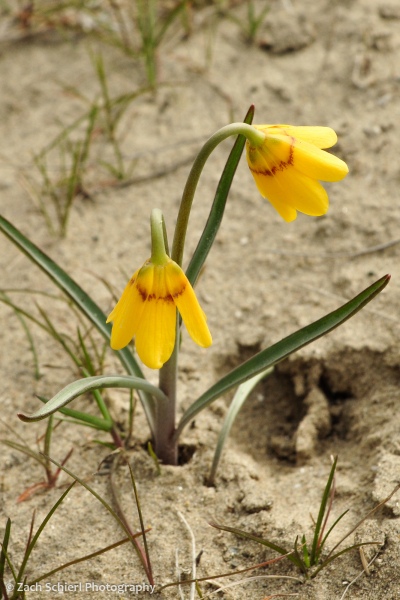 One of the first wildflowers of the season, Yellow Fritillary (Fritillaria pudica), poking through the sand.

A few weeks later, and just a few days before a statewide shelter-in-place order took effect, we “socially distanced” ourselves by heading to the White Bluffs, a several mile-long stretch of chalk-colored cliffs along the banks of the Columbia River directly across from the Hanford Site. Part of the Hanford Reach National Monument, the bluffs are a mixture of fine sediment, some deposited by the ancient Columbia River itself, and some by massive floods that swept across central and eastern Washington during the last “ice age” 12,000 to 18,000 years ago. Persistent winds scour loose sand from the cliffs and associated landslides, depositing it in a large dune field along the crest of the bluff. 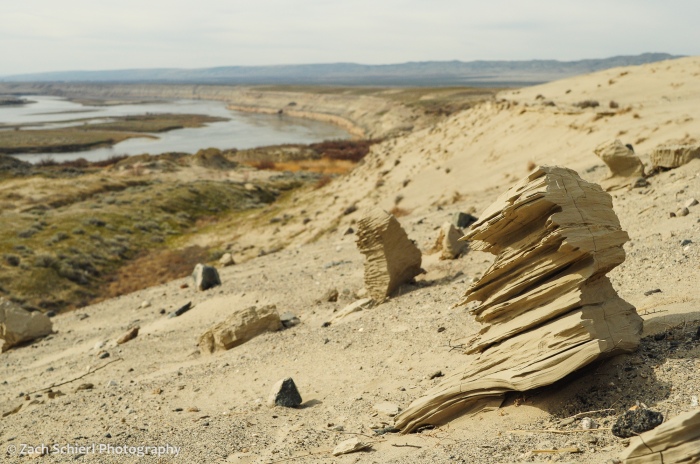 Wind abraded chunks of sediment rest on the ground with the Columbia River in the background. 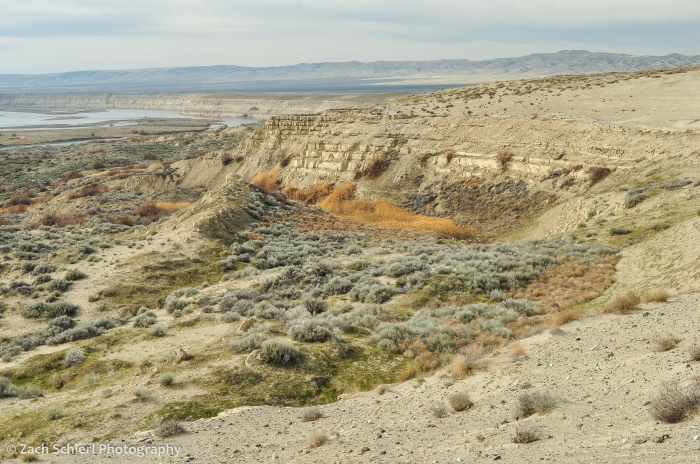 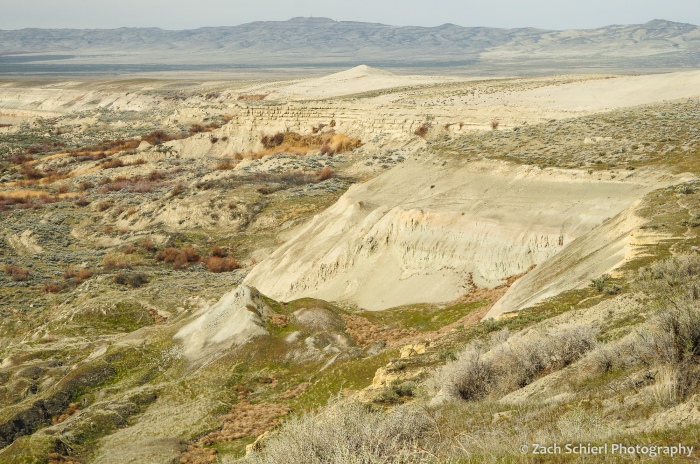 The aforementioned floods shaped much of the modern topography of central and eastern Washington. One of the most spectacular features formed by these floods are the broad, steep-sided ravines known as coulees. Formed when floodwaters aggressively plucked large columns out of the basaltic lava flows that blanket much of the Pacific Northwest, most of the coulees are eerily dry today and not until the 1920s did geologists unravel their true origin. Two of the most impressive and easily accessible are Frenchmen Coulee and Echo Basin, just off of I-90 between Seattle and Spokane. Crammed with rock climbers in the good weather months, in mid-January when we visited we had the coulees almost entirely to ourselves: 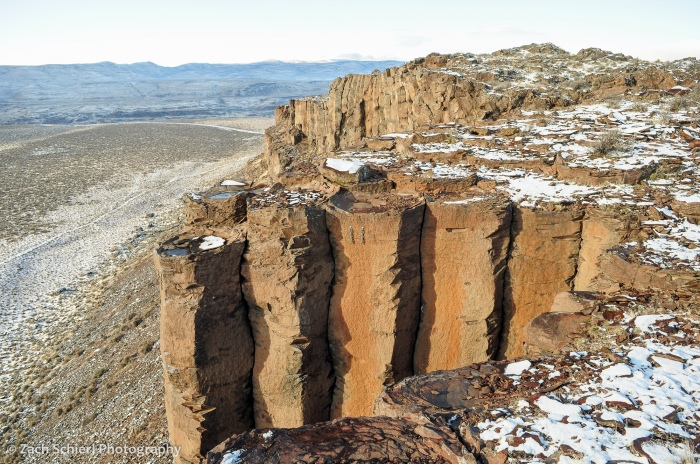 Large hexagonal columns of basalt along the rim of Echo Basin, a popular site for rock climbing…in the warmer months! 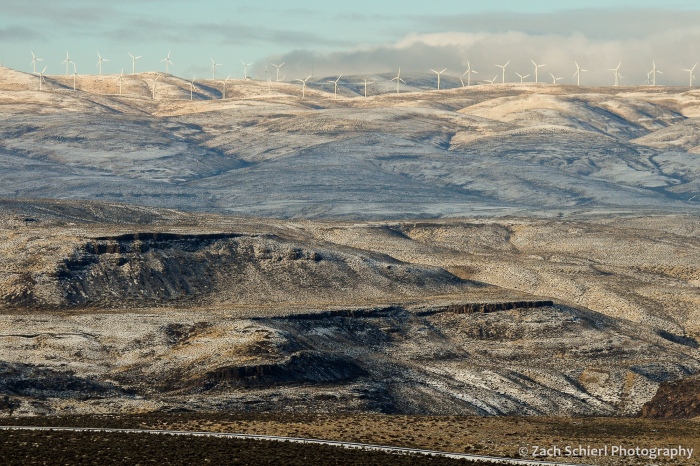 More photos to come from the 2019 archives! I’ve also been working on creating a more comprehensive “Galleries” page where you can view my photos sorted by location. Check it out here.