Into the Valley of Death (Part 1)

Death Valley and Badwater Basin seen from Dante’s View, over 5,500 feet above the valley floor

Badwater Basin in Death Valley, the lowest (and hottest) point in North America at 282 feet below sea level, has long been on my list of places to visit in person. In part because of the superlative involved but also because Death Valley on the whole is a geological Mecca of sorts. A few weeks ago, I finally got to make my pilgrimage, but not without a few surprises. First of all, I never expected to be wearing four layers (including thermal underwear) and a winter hat when taking my picture next to the famous Badwater sign. I also didn’t expect visiting Badwater to be one of the least interesting things that I saw in Death Valley. This is not a knock against Badwater, but rather a testament to the fact that even after visiting 32 of the 59 national parks in the US, I can honestly say that Death Valley was one of the most spectacular and diverse I have been fortunate enough to spend time in.

With a week off before Christmas, we were looking for someplace “warm” to camp. We had originally planned to head to southern New Mexico and Texas to check out the Big Bend and Guadalupe Mountains area. However, in the days leading up to our departure, the forecast lows plunged into the low 20s. It wouldn’t kill us, but we figured we could do better. Heading to Death Valley turned out to be a good audible as the lows were only in the low to mid 40s, quite pleasant by December standards. Oddly enough it was a bad experience during the depths of winter in 1849-50 that gave Death Valley its foreboding name. One member of a lost and ragged group of prospectors is said to have quipped “goodbye Death Valley” as they finally departed the basin that had given them such torment. Today though, armed with an automobile and several large water jugs, winter is an ideal time to take in the spectacular sights of Death Valley. After several days in the park, saying “goodbye” was the last thing I wanted to do.

The first thing to know about Death Valley: it’s big. Nearly 3,000 square miles big. The national park that protects it and the surrounding mountains covers upwards of 3.3 million acres—about the size of Yellowstone and Grand Canyon National Parks combined—making it the largest national park in the U.S. outside of Alaska. It takes awhile to get around and the character of the valley varies wildly along its 100+ mile length. All parts of the valley share some common characteristics though: heat (average July high: 116.5 F), aridity (2.3 inches in a good year), and low elevation (over 500 square miles of the valley lie below sea level).

Death Valley has been low for a long time but the dryness is a comparatively recent development. During the last glacial maximum (geologist-speak for “ice age”) 12,000-30,000 years ago, the surrounding mountains received so much precipitation that Death Valley turned into an 100 mile-long lake known as Lake Manly. Since Death Valley is bordered on all sides by mountains, streams draining out of the mountains had no easy way out. Over time, as the climate dried and the lake evaporated, thick layers of salt were deposited on the valley bottom. This is why most of the valley floor appears white. With the encouragement of the rangers, I tasted it and can confirm that it is indeed salt! 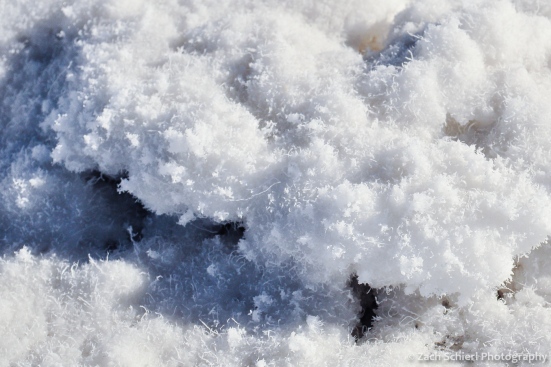 In many locations (in particular a spot known as “Devil’s Golf Course”), the salt grows into some fantastical yet potentially dangerous formations. The valley here is a wonderland of 1-2 foot high irregular mounds of salt & mud, all encrusted with razor sharp blades and daggers made of salt crystals (see photos below). While the salt is relatively brittle, falls are still to be avoided at all cost. Walking around Devil’s Golf Course reminded me of the time I completed shredded a brand new pair of leather hiking boots in one week of doing geology field work on fresh, sharp a’a lava flows in Hawaii. The only difference was the a fall here would quite literally rub salt in your wound, not a pleasant thought at all.

Close-up of the salt formations at Devil’s Golf Course.

Near Badwater Basin are some spectacular and very colorful badlands sculpted out of young, soft, clay-rich sedimentary rocks. We arrived in Death Valley our first day just in time to catch sunset over the badlands (photo at top of page) and then hiked through them the next day after we started to desiccate from walking around on the salt flats too much.

Late afternoon light on Manly Beacon in the badlands near Furnace Creek. Note hiker for scale.

If salt daggers, ancient lakes, and badlands aren’t enough excitement for one day, you’ll be happy to know that the northern end of Death Valley has experienced some volcanic activity within the past few thousand years. In a stark contrast to the bleak white salt flats of the southern valley, the valley landscape here is shrouded in dark black cinders and volcanic cones. The centerpiece is a large hole known as Ubehebe Crater, a type of volcanic feature known as a “maar.” Maars are the result of “phreatomagmatic eruptions” (your new scrabble word for the day; it will just take you a few turns and some incredibly good luck to be able to play it…), which occur when magma beneath the Earth’s surface comes into contact with groundwater. The heat from the magma causes the groundwater to flash into steam, creating a violent explosion, and, as so often happens with violent explosions, a large hole in the ground. The red and white sedimentary rocks that existed prior to the eruption still appear beneath the volcanic cinders in places creating a beautiful palette of colors.

Ubehebe Crater, at the north end of Death Valley, at sunset

More photos of sand dunes, mountain canyons, and the spectacular geology of Death Valley to come!