The last destination on our Alaskan journey was the Kenai Peninsula and the town of Seward. After a few days respite from the wildfire smoke in Wrangell-St. Elias, it returned with a vengeance as we headed back to Anchorage and down to the the coast:

After baking in the heat of the Alaskan interior for the last week, the marine climate of Seward was a welcome change. We even had a bit of rain for one of the few times in our entire trip.

While temperatures in Seward we’re somewhat more mild, the coastal location meant the humidity was not. On our first day in Seward, we partook in a brutal hike up to the Harding Icefield in Kenai Fjords National Park. The hike itself was not abnormally difficult, but we were definitely not used to the combination of heat and humidity, leaving me feeling physically ill at several points during the slog up the mountain. The day had started off overcast, but as we climbed, the clouds evaporated leaving us with stellar views of the rapidly retreating Exit Glacier and the Harding Icefield from which it originates. An icefield is essentially a large mass of interconnecting glaciers. The Harding Icefield is the largest — and one of only four — remaining icefields in the United States. The Exit Glacier itself has retreated more than a mile in the last 200 years, leaving trees and other vegetation to begin re-occupying it’s former valley.

Looking down the valley partially occupied by the Exit Glacier just a few hundred years ago.

The white and blue ice of the glacier made for a stellar contrast with the lush green vegetation of the alpine zone:

The wet climate of coastal Alaska results in extremely heavy snowfalls, making this one of only a handful of places in the world where glaciers flow all the way down to sea level to meet the ocean. Known as tidewater glaciers, these glaciers exhibit complex patterns of advance and retreat that, unlike standard alpine glaciers, are not purely the result of variations in climate. While warmer temperatures or prolonged drought can certainly reduce their mass, the movement of tidewater glaciers is also subject to complex interactions between the ice, the geomtery of the ocean floor, and the depth of the water into which they flow.

On our second day in Seward, we took a water taxi into the heart of Kenai Fjords National Park and then kayaked to within about a quarter mile of the terminus of Holgate Glacier. Tidewater glaciers have a tendency to “calve”, in which large chunks of ice break off the glacier and fall into the ocean, necessitating a safe distance. Glacier “social distancing” if you will. It is not hard to find videos on YouTube of people getting too close to calving tidewater glaciers, with quite predictable results. From our safe distance, we observed and heard several calving events in the few hours we were kayaking around the bay, but unfortunately I was not adept enough at kayaking into position quickly enough to actually capture one on camera. 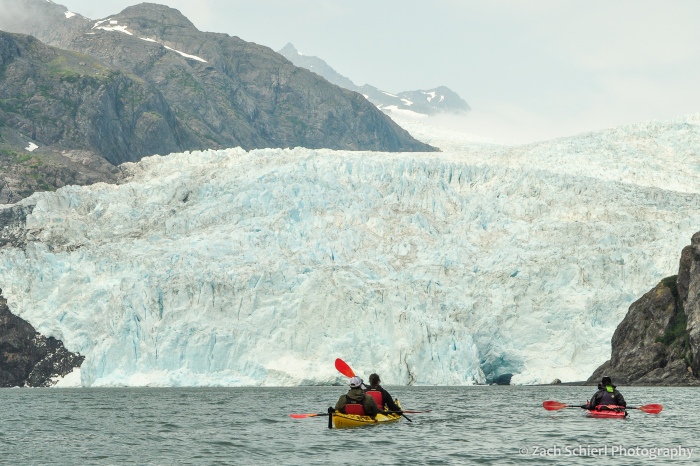 Kayaking toward the terminus of the Holgate Glacier, Kenai Fjords National Park, Alaska

Our boat ride back to Seward through Resurrection Bay also resulted in sightings of sea lions, seals, puffins, and even two pods of orcas: an exciting end to the trip!

Horned Puffin (from the Alaska Sealife Center in Seward, because the photo was better than the wild ones…)