A Sheep, a Sheep! My Kingdom for a Sheep! 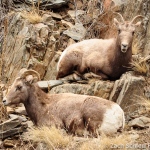 After some memorable elk encounters this past fall, I’ve been on the lookout for more wildlife viewing opportunities over the past few months. A flock of several thousand Canadian geese passing overhead while extricating my car from a foot of snow at the Denver airport didn’t quite cut it so on a recent weekend, we headed out in search of one of Colorado’s most iconic creatures: the Rocky Mountain Bighorn Sheep.

It turns out that late November and early December is the best time of year to view Rocky Mountain Bighorn Sheep here in the foothills of the Colorado Rockies. This time period marks the annual bighorn sheep rut, or mating period. While the bighorn sheep rut attracts far less attention than the fall elk rut, at this time the sheep descend from higher elevations to avoid deep snowpack and are frequently seen along canyons such as the Big Thompson, just a short half hour drive from Fort Collins (where I now live).

If that name sounds familiar, it’s because Big Thompson Canyon is better known as the site of a number of large and particularly deadly floods in the past few decades than as prime bighorn territory. But in late autumn and early winter, this is the place to be for some serious sheep spotting and shooting (with a camera of course!). This is not to say the sheep are always easy to spot. The beige bighorns, with the exception of their white butts, blend into the brown and shrubby landscape extraordinarily well. Here’s a view of the second pack of sheep we spotted to better illustrate the challenge:

You can see the problem: brown vegetation + brown rocks + (mostly) brown sheep = hard to spot sheep. It’s like Where’s Waldo, only in real life and with sheep instead of fictional characters with questionable fashion sense. Anyways, when whizzing by at 50 mph (the minimum speed required to avoid being rear-ended by folks hellbent on getting to Estes Park) on a road with little to no shoulder, it helps to have at least one pair of eyes apart from the driver to scan the cliffs and ledges so loved by the sheep for movement or a flash of a white rump.

In the end we spotted two groups of bighorns in about two hours in the late morning, the first group containing one ram and three ewes, the second two rams and three ewes. The first group was bedded down right along the Big Thompson River, just a stone’s throw from the highway right at the entrance to the canyon. With a little creative parking and scrambling, I was able to get some good close-ups of the sheep (see top photo and below). The second group was larger and more active, but was in a gully across the river over a hundred yards from the road, well outside the range of my pathetic telephoto equipment.

The presence of two rams in the second group was exciting because it afforded the possibility of seeing the famous bighorn sheep head-butting combat ritual in action. Alas though, these rams seemed much more interested in quietly grazing on the scant remaining greenery than in slamming their heads together at speeds of more than 30 mph (who wouldn’t?)

A good look at the large curved horns on the male bighorns, used in head-butting competitions with other males for the right to mate with prime females. 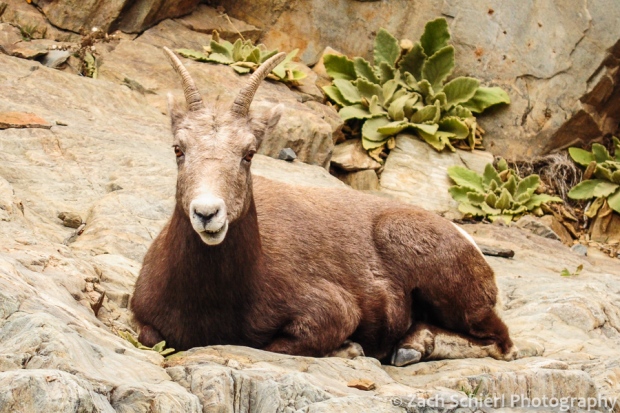 The bighorn sheep will continue to be visible in the Big Thompson area throughout the winter (as they avoid the deep snowpack at higher elevations) although once the rut concludes they become much more averse to human contact and populated areas. Unlike some other notable large mammals of the Rockies, bighorn sheep tend to be most active during daytime hours, making them relatively easy to spot if you have a keen eye.