Yes, I know its 2013.  Better late then never I always say. Actually, I don’t really say that often, I just made that up. 2012 was kind of a hectic year for me and as a result my posting frequency has been somewhat erratic over the course of forever. While I may not have had as much free time as I would have liked, the fact that I lived in three different places over the last 12 months has afforded me the opportunity to photograph an incredibly diverse set of landscapes,  from alpine meadows and glaciers, to rainforests and tide pools, to sand dunes and deserts, and even some rare astronomical phenomenon.

Since everyone loves a good “Top 10” list, I’ve decided to take the excitement to the next level and compose a “Top 12” list of my favorite photos from 2012.  I’ll note that “favorite” is most definitely not synonymous with “best”. Some of these photos definitely won’t be winning any awards anytime soon (well, none of them will I suppose…) but nevertheless have a special place in my aortic pump for some reason or another, which I’ve tried to capture in the caption where applicable. Coming up with the list was challenging. Imagine separating wheat from chaff if what you have is mostly chaff. At one point I almost just included three pictures of chubby squirrels to round things out. I also briefly considered posting a dozen paparazzi shots of sunbathing celebrities and seeing if anyone would actually notice. As you can see, I ended up doing neither of these things but if you disagree with my final assessment, feel free to start a flame war in the comments. Or just tell me which ones you like the best…

I should note that many of the photos may look familiar if you follow this blog. If that’s the case, rather that whine about repeats, I suggest you savor them just like you might a re-run of a favorite episode of Friends, Seinfeld, or Cheers. However several of the photos on the list never made it onto the site, sometimes because I didn’t have enough photos to justify a full post, but often simply due to the fact that I am a graduate student and “free time” is a pretty foreign concept to my kind.

Ranking the photos from 1-12 seemed like a waste of time. I’ll let you form your own opinions and so I present them to you here in chronological order:

1. Sunset from Desert View Overlook, Grand Canyon National Park. (I’ll come clean: I actually took this one in the waning days of 2011 but since I didn’t do a Top 11 list from 2011, I decided to include it here. Sue me.) Sadly, particulate matter and smog from major population centers in the southwest (cough cough Las cough Vegas cough cough) is obscuring the view of the canyon on an ever increasing number of days. Perhaps the only positive is that it can make for some spectacular and surreal looking scenes when the smog is backlit by the setting sun. 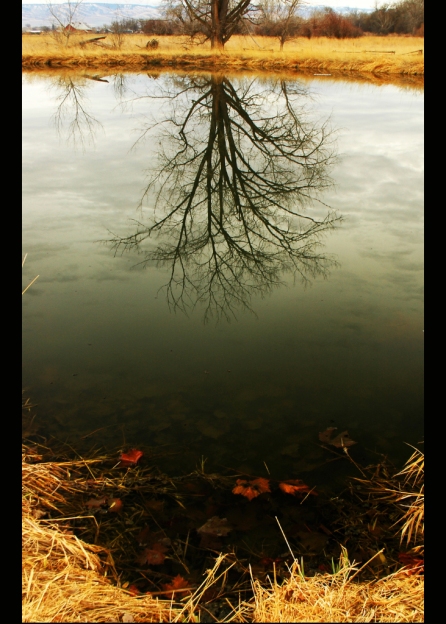 2. Pond Reflection, Whitman Mission National Historic Site, Walla Walla, WA. Water doesn’t get much smoother than this. Amazing how a picture of a gray and stormy sky is that much more interesting when it’s reflected in a pond. Also amazing that those leaves still have any color left in them considering they would have fallen about 4 months ago…

3. Zeus Visits Walla Walla. There’s nothing quite as thrilling as getting lucky enough to take pictures of a severe thunderstorm from the comfort and (relative) safety of your own front door. I even got the added bonus of having the neighboring hotel/meth lab in the foreground! This is actually a composite of several images that I took over a period of several minutes. Lightning photography is tricky; theoretically the longer an exposure you take, the better change you have of catching a lightning strike. However, a super long exposure would have completely blown out the already extravagantly lit motel so the only way for me to capture multiple lightning strikes in this particular case was to take a time series of shorter images, and then combine them into one using Photoshop.

4. Palouse Falls State Park, Washington. This photo is probably my favorite panorama from this year. You almost need a panorama to truly capture everything there is to see at Palouse Falls.  The powerful waterfall, swelled by snowmelt, combined with the green terraces in between the basalt colonnades (GEOLOGIC TERM ALERT!!!) is unique to spring, since by autumn the waterfall has shriveled to a trickle and all that was once green becomes brown.

5. Transit of Venus, June 6th 2012. A picture of something that won’t happen again for 115 years makes the list by default, even if it’s not of particularly high quality. The red orb is the Sun, as seen through a telescope fitted with a hydrogen-alpha solar filter. The black circle is the silhouette of the planet Venus as it passes directly in-between the Earth and the Sun, something that it only does in pairs about every 120 years. The things that look like dust spots are actually sunspots and the little flame-like wisps around the edge of the Sun are some small solar prominences (small=several times larger than Earth), ginormous eruptions of hot plasma that briefly travel along the Sun’s magnetic field lines before being pulled back in by the Sun’s intense gravitational field. 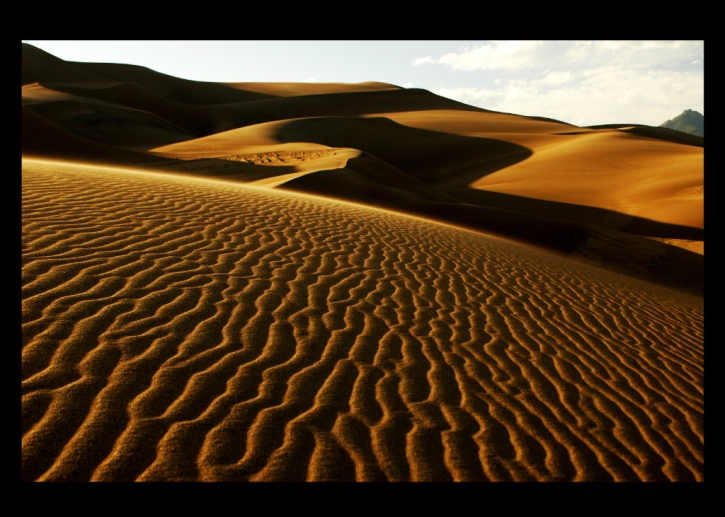 6. Ripples in the sand sea, Great Sand Dunes National Park, Colorado. Sand dunes come alive at sunset. A surface that burns your feet and looks flat and featureless at noon is revealed to be complex and majestic as the Sun nears the horizon. The geologist in me can’t take my eyes off of the thin layer of saltating sand grains catching the last rays of sunlight as they bounce their way across the dunes.

7. Delicate Arch at Sunset, Arches National Park, Utah.  There’s sort of a lot going on in this picture. I like how 99% of the crowd is seemingly oblivious to the gorgeous rainbow rising up from the desert behind them. Delicate Arch is one of those places that pretty much every landscape photographer visits at some point in their life, and for good reason. But I think think photo captures a really interesting aspect of the place, namely the fact that in reality it doesn’t even remotely approach the wild, untrodden wilderness that it is normally made out to be when you see it on glossy magazine covers. Pretty much any evening at sunset, regardless of season, you’ll find a scene more or less the same as this one (well maybe minus the rainbow..), with dozens of people staking out their spot over an hour before sunset. 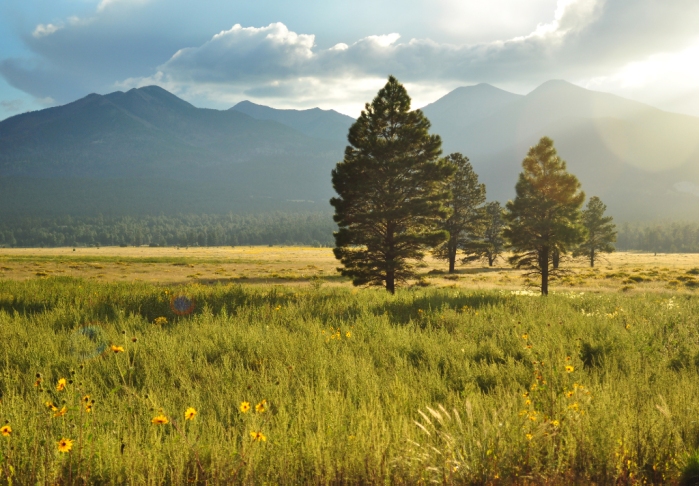 8. Sunset from Bonito Park, Coconino National Forest, Arizona. Looking west towards the San Francisco Peaks in the late afternoon. A few late-season wildflowers hanging on to dear life. Not a whole lot I can add to this one. This is home for me. It’s quite pretty.

9. Self-portrait with Anemones, Larrabee State Park, Washington.  Is it weird to choose a picture of yourself for a list like this? I’m gonna go with “no” because I chose this one not because I’m particularly photogenic, but because the multi-colored anemones really steal the show and distract the viewers from my unsightly visage. Plus they shrivel up when you poke them which is kind of cool. 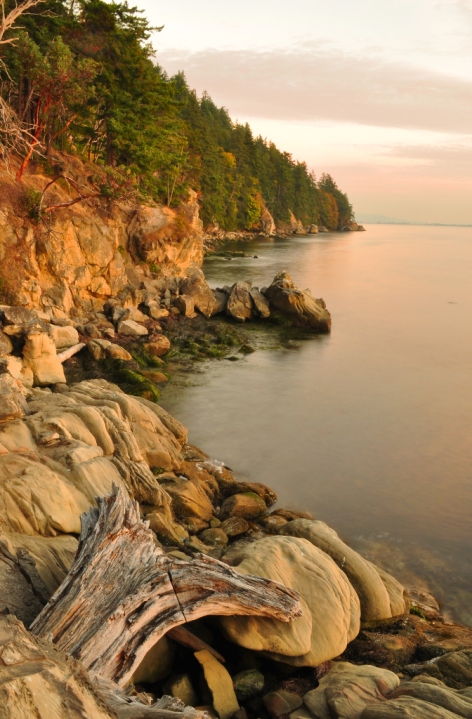 10. Late-summer sunset along Samish Bay, Larrabee State Park, Washington.  This photo was a perfect example of an occasion where a little planning went a long ways. I had previously scouted out locations along the coast near Bellingham that would be ideally suited for catching the last rays of sunlight prior to sunset. This seems like one of the best spots so I stood here for about an hour before sundown waiting for the best lighting conditions. I would like to think that I got them. An exposure time of 15 seconds helped smooth out the incoming waves, giving the water its silky, silvery sheen.

11. Aurora Borealis display from Ferndale, Washington. While this photo may not pack the punch of the aurora shots you see coming out of Alaska, the Yukon, or Scandinavia, for me it was just as satisfying. As an avid amateur astronomy who grew up in the Southwest, I had a hard time restraining my excitement when I got to see my first ever auroral show this October. An impressive showing for the lower-48, these pillars cutting through the bowl of the Big Dipper danced around the sky for over an hour and were just a small part of a show that lasted into the wee hours of the morning. The grayish-purple light along the horizon is light pollution from Vancouver, B.C. And my classmates wondered why I was falling asleep in my 8am class the next morning. Also, you should ignore the power lines…

12. Sleeping Sea Lions, Coast Guard Pier, Monterey, CA. If you want to see a lot of sea lions, forget Pier 39 and San Francisco, go to the Coast Guard Pier in Monterey, CA and you’ll find piles and piles of them, just feet away on the other side of a metal fence. Compared to their San Francisco brethren, they’re a bunch of lazy bums though. I wish I could sleep all day long like that…then again I have a bed of my own and don’t have to sleep beneath multiple rear ends so I guess I don’t get to complain.

Be sure to stay tuned for a 2013 version in just a little more than 10 months!