Snails of a Different Color 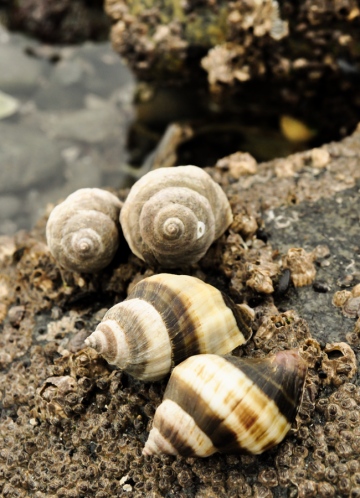 Up until a few days ago, I would have felt extremely confident saying that I’ve seen more fossilized sea snails in my life than I have real ones. After all, teaching a lab that revolves around sedimentary rocks for two quarters will put one in close contact with more dead gastropods than one ever thought possible. And when you spend a lot of time staring at multi-million-year-old fossils, it’s often easy to forget that lots of the little buggers have closely related relatives still trolling the high seas today. 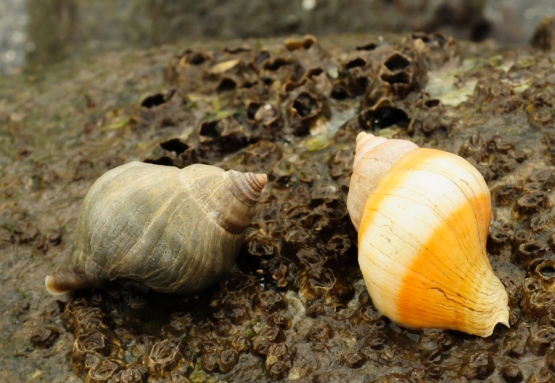 Just a few of the many, many, MANY different colored and patterned varieties of nucella lamellosa, the Frilled Dogwinkle

A few days ago though, I stumbled upon a sea snail breeding ground of epic proportions at a place called Point Whitehorn Marine Reserve. I had gone there with the express purpose of looking at rocks and I remain convinced that the snails made their dramatic appearance in order to force me to confront the inherent irony in going to a marine reserve to look at rocks. Near the low-tide line, a couple of bright orange striped shells grabbed my attention, sticking out marine creamsicles amidst the backdrop of drab green algae and seaweed, dull brown barnacles, and grey sky reflected in the waves. I soon realized that I was surrounded (in a benign and not even remotely threatening way) by hundreds upon hundreds of sea snails exhibiting a dazzling array of different colors and patterns.

Now, my knowledge of sea snail taxonomy is limited, but it appears that despite the disparate appearance of these snails,  they are all part of the same species: nucella lamellosa, also known as the Frilled Dogwinkle or Frilled Whelk (if anyone has information to the contrary, please let me know). Most of the snails in these photos are smooth; they have lost their ridges or frills that normally run along the length of their shell. This is apparently a common fate of nucella lamellosa that choose to spend their lives in places like Pt. Whitehorn which experience very rough surf during the winter. The frills literally get worn away, not at all surprising when you consider that the shells are made out of calcium carbonate, a substance that in it’s crystalline form is only a we bit harder than drywall. 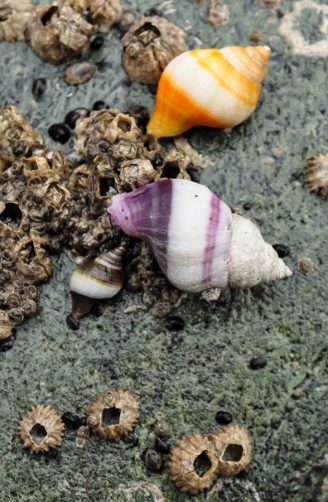 Purple was the rarest color I encountered; orange, black, grey, and pure white seemed to be the most prevalent.

Many rocks were encrusted with dozens of the snails, varying in size from babies barely larger than a pea, to a few gargantuan snails nearly four inches long. This species hatches in late winter and early spring, so this is a good time to get a sneak peak at the next generation. A female sea snail can apparently lay thousands of eggs each year, although like most species who opt for quantity over quality when it comes to reproduction, only a small percentage survive to adulthood. In the case of nucella lamellosa, that number is estimated at a paltry 1%. Upon reading this, I realized in horror that the occasional sharp “crunch” heard from underneath my boots while I was taking these photographs was nothing other than the sound of my contribution to this rather depressing and morbid statistic. But with any luck, those shell fragments I (inadvertently) created will get weathered, transported, buried, and fossilized, eventually re-surfacing in the collection of some enterprising geologist a few million years from now, a fate that can only be described as THE ultimate honor for any ambitious gastropod. 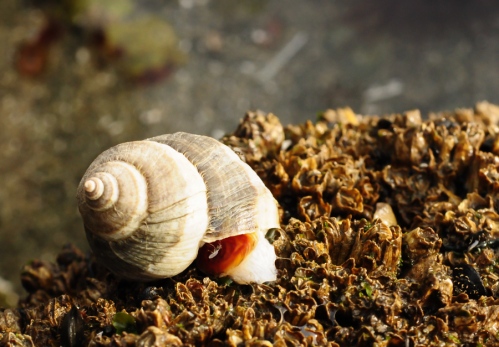 The only decent shot I got of the innards of these snails. 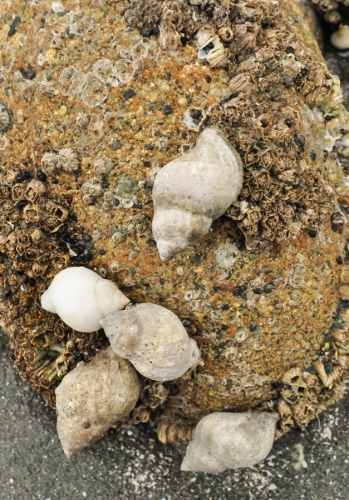 A handful of the less gaudy looking but substantially larger snails. The largest one here is almost three inches long. 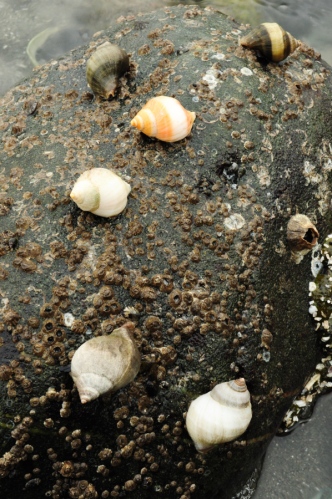 A variety six-pack of nucella lamellosa munching on some barnacles. 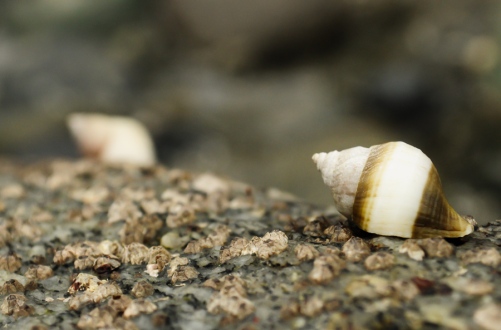 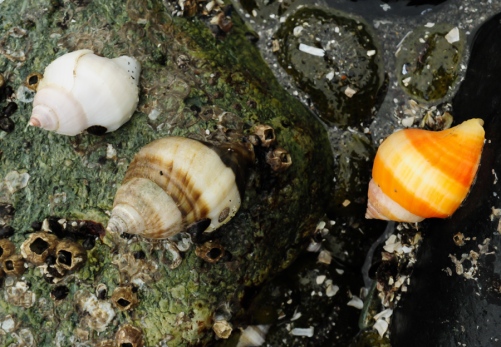