Twice a month, the positions of the Sun, the Moon, and the Earth all lie in a straight line. It is during this time that we see the Moon as either “new” or “full”, depending on whether the Moon lies between us and the Sun, or we between the Sun and Moon. Never content with a simple geometrical description, astronomers call this alignment of celestial bodies a syzygy, a word that surprisingly will net you just 21 points in Scrabble given that it requires a worthless blank tile in order to play. While a syzygy’s effect on your board game exploits may be negligible (unless you manage to plunk that “Z” down on a double letter score and the final “Y” on a coveted triple word score…in which case, whoa! You’re up to 93 points and the game is most assuredly yours to lose!), the effect of such an alignment on our planet is actually quite pronounced. The gravitational fields of the Sun and the Moon exert an attractive force on us; the difference in the magnitude of this attraction on opposite sides of the Earth is, in part, what gives rise to the phenomenon we know as tides (for an explanation longer than two sentences, I refer you to NOAA). During a syzygy, the force from the Sun and the force from the Moon are aligned, with the result being that the range in tides we observe is larger. In other words, high tides are higher. Low tides are lower. And when low tides are lower:

You can’t quite see them all in this photo, but by my count there were about five dozen starfish visible in the field of view when I took this photo. The first syzygy of March 2013 provided me with some abnormally low, mid-day low tides and consequently the opportunity to photograph the plethora of starfish that call Larrabee State Park just outside Bellingham home. During typical low tides, such as the ones we get when the Sun and Moon are at right angles to each other and their gravitational pulls partially cancel each other out, most of these starfish are comfortable below sea level. Even then, a little searching will undoubtedly reveal a handful of starfish clustered beneath rocks or under piles of slimy, green, washed-up seaweed. But when the tide drops below  the typical low tide level, the most common starfish in the area, Pisaster ochraceus, the purple or ochre sea star, is literally EVERYWHERE. The quantities can actually start to make you feel somewhat threatened until you remember that starfish move at like 0.0003 miles per hour and have something called “tube feet”. As you can see, the starfish tend to cluster in cracks and crevices within the rock. This is annoying because the cracks and crevices are about the only place you can put your feet without running the risk of losing your footing and smashing your skull open on the sandstone and exposing your brains for the seagulls to pick at, given that most of the rock is covered in slick seaweed that makes banana peels look like coarse sandpaper when it comes to the degree of traction provided.

Pisaster ochraceus comes in three different flavors…err, I mean colors. The purple stars dominate, but orange and pink individuals are not uncommon. I was able to locate one extremely diverse constellation of starfish (I have absolutely no idea what the collective noun for starfish is, but it would be pretty cool if it was “constellation”…) hanging out under a rock:

The wide range of color variation exhibited by Pisaster ochraceus.

I never cease to be fascinated by the robust rigidity of starfish. The purple ones in particular look like they should be nothing more than wet, sticky, gelatinous blobs of silly putty, but alas you can’t even copy newsprint with them, much less mold them into an sphere, which is the ACTUAL shape of a star—that is unless the star is rotating rapidly, in which case its shape may be more closely approximated by an oblate spheroid.

Some of the stars exhibit signs of multiple personality disorder, giving us some bizarre orange and purple combination stars like this one here:

As brightly colored as they are, the sheer abundance of Pisaster ochraceus along the NW Washington coast makes them the black bear of the starfish world. Impressive surely, but not really what we came to see. A closer inspection reveals some less commonly spotted species. For example, meet the “grizzly bear” of sea stars: 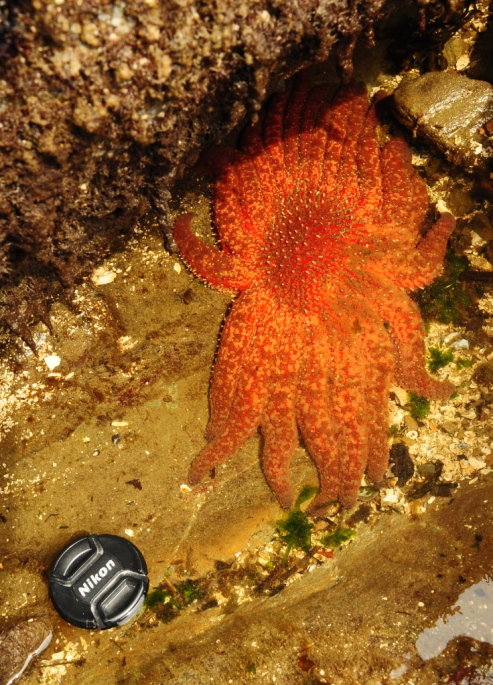 The find of the day: a 20-armed sunflower star, otherwise known as Pycnopodia helianthoides.

I think we can all agree that Pycnopodia would be one of the most utterly terrifying species on the planet if it was capable of moving at any rate of speed that could be considered “fast”. Sure, it doesn’t eat humans but neither do spiders and this thing pretty much looks like a gigantic, orange, 20-armed spider with spikes. Given that I know plenty of folks who start to dial 911 at the sight of a spider the size of a pin-head, there is no doubt in my mind that there would exist an entire industry devoted exclusively to Pycnopodia extermination if it had managed to move more than the 3 inches that it did in the 20 minutes I sat there watching it. Clearly Alfred Hitchcock never encountered a sunflower star or I think his film-making career would have featured less birds and more marine life.

Two spotted arms of a leather star, Dermasterias imbricata, poke out from under a rock.

For a list of upcoming sygyzgies, check out this handy moon map, and to see when starfish viewing will be ideal along your favorite beach, you can find no better resource than the official NOAA Tides & Currents website.