Traces of the Sinagua: the V-V Petroglyph Site

Located just about a half hour southeast of Sedona, the V-V petroglyph site is one of the most spectacular and best preserved petroglyph sites in Arizona.  Located on the private V-V ranch until 1994 when the ranch was acquired by the Coconino National Forest, the rock art was likely created by the Southern Sinagua between 1150 and 1400.

Stone chminey at the entrance to the V-V Ranch

The main panel of petroglyphs at the V-V site. The sprial patterns at upper left are thought to have served as part of a solar calendar

During certain times of year, the Sun shines through the small slit overlooking the petroglyph panels seen in the photo below.  Large rocks that protrude from the cliff face cast shadows that fall on the panel indicating the vernal and autumnal equinoxes as well as other dates that would have been important to the Sinagua.

The V-V petroglyphs are not the only clues left behind by the Southern Sinagua.  The Verde Valley is home to numerous petroglyph and pictograph sites, cliff dwellings, and other ruins, many of which are thought to have been constructed during the same time period as the V-V site. Perhaps the most impressive is Montezuma Castle, a 20 -room cliff dwelling near Camp Verde nesteled about 100 feet above the valley of Oak Creek in a cliff of old lakebed sediments known as the Verde Formation 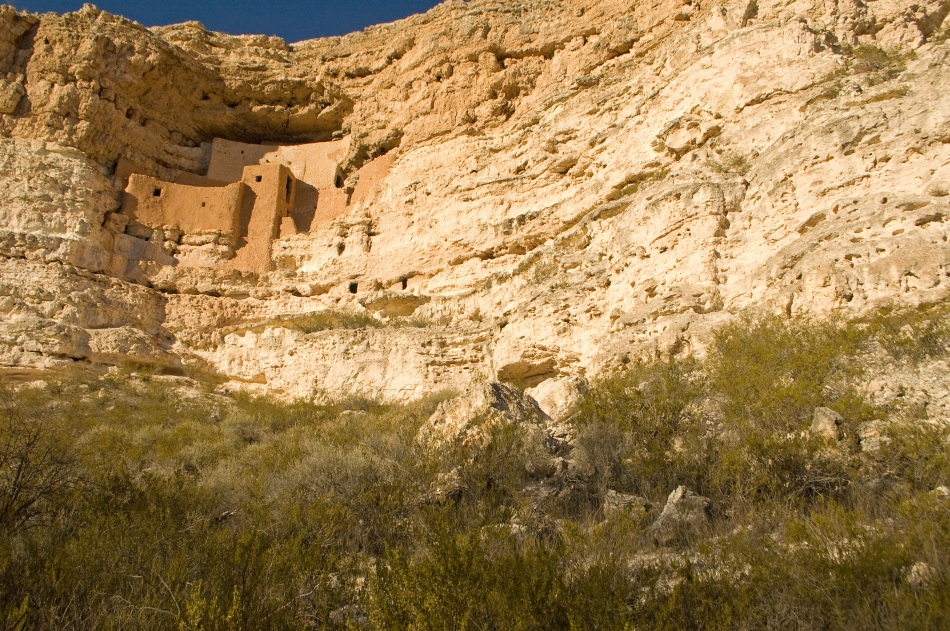 A few miles south of the V-V ranch is Montezuma Castle, also constructed by the Southern Sinagua around the same time period

For directions and hours to the V-V site, check out http://redrockcountry.org/recreation/cultural/v-bar-v.shtml

This entry was posted on January 11, 2011 by Zach Schierl. It was filed under Petroglyphs, Sedona and was tagged with Archeology, Beaver Creek, Petroglyphs, Rock Art, Sedona, V-V Petroglyphs.