Went for a hike along the beach this afternoon and was rewarded with an absolutely fantastic sunset.

On an unrelated note, I have now been invited to dinner by complete strangers twice in the last 72 hours.  Bizarre.  Huzzah for Kiwi hospitality I guess.

One week of classes to go! 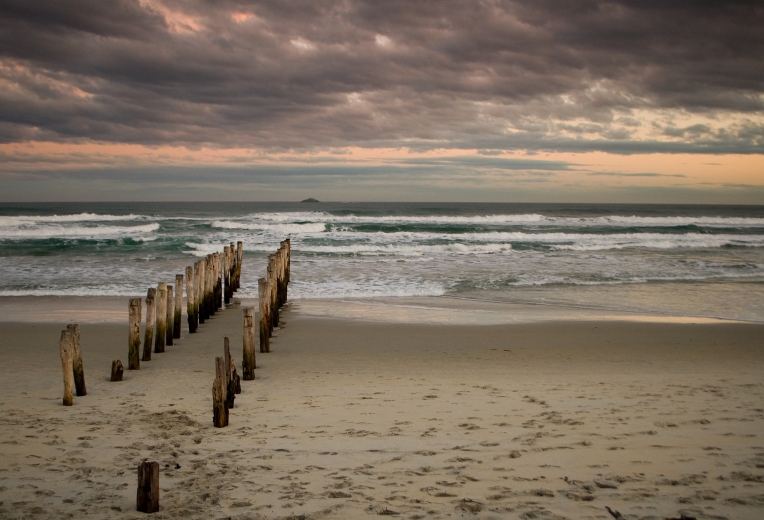 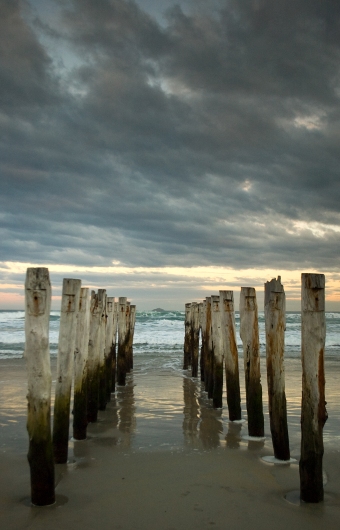 The pier…again. White Island on the horizon.

St. Clair at dusk. I could totally get used to this whole living near the beach thing…

Sleeping with the spiders

Recently returned from a 4-day unofficial geology field trip (read: glorified sightseeing trip on which we occasionally talked about rocks)  in which we managed to pretty much circumnavigate the entire South Island of New Zealand. Most of our time was spent along the west coast (the “wet side” of the island so to speak) and in Abel Tasman and Kahurangi National Parks. It rained pretty much the whole time and the humidity was so high for so long that some of the inner lens elements on my camera fogged up on day 2 and still haven’t completely dried out yet.  I had a second little point and shoot camera with me but more often than not it decided that it wanted to tell me that the batteries were dead even when I had just put fresh ones in which was incensing to say the least.  Ultimately, not the most productive trip photography wise but we got to see some amazing, off the beaten path places that I never would have even known existed were it not for the leadership of one of the Otago geology professors. Among the highlights were:

Caves, arches, sinkholes, and tunnels were definitely the theme of the trip.  We slept in them, hiked to them, hiked through them, attempted to avoid falling into them, and much much more.  The Oparara Basin is home to a number of caves, many of which are infested with two lovely creatures: the Nelson cave spider (think tarantula only larger and skinnier) and the cave weta (think giant mutant cricket).  Both of these fall into the category of “things you want to pretend don’t exist in the cave where you are trying to fall asleep”.  However, given that the spiders hunt the weta, and that the weta emit a rather bizarre shrieking cricket-like noise when caught by the spiders, this is easier said than done.  On the bright side, the cave was dry whereas there was a pretty legit thunderstorm going on outside that even ended up spawning a bunch of little tornadoes a couple hours away from us so in hindsight the cave was probably a good call.

In the morning we hiked through a torrential downpour to reach to very photogenic caves/tunnels along the Oparara River, both of which are surrounded by magnificent, dense rainforests.   The larger of the two, Oparara Arch is a tunnel over 200 meters long and 50 meters high: 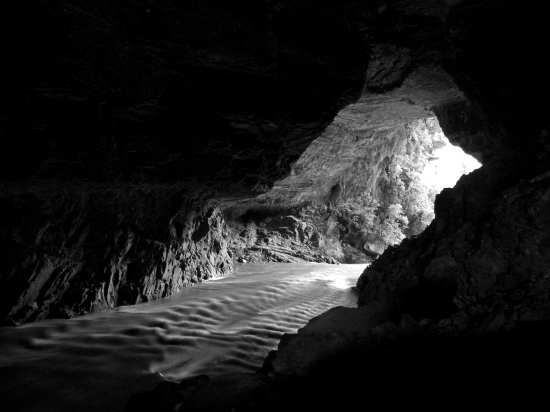 A few km downstream is the smaller Moria Gate Arch:

Kahurangi National Park is the second largest national park in New Zealand but one of the lest developed and most remote.  There are no paved roads within the park and we didn’t see another soul during our entire time here.

Another limestone sinkhole, Harwood’s Hole is no run-of-the-mill sinkhole; it’s nearly 1200 feet deep but only 150 feet wide.  Standing on the edge, you can’t even begin to comprehend how large it is because even from a ledge halfway down, you can’t even see the bottom.  Sadly we did not possess the equipment necessary to descend into New Zealand’s deepest cave (no one did until the late 1950’s…) so we were forced to settle for this view from the rim: Wharariki Beach is the most northern beach on the South Island that is open to the public and not closed off as a bird sanctuary.  It’s definitely one of the coolest beaches I’ve seen, with tons of caves, arches, and sea stacks along the coast and an impressive sea of sand dunes just inland.

On the day we visited it happened to be rather windy and when I say rather I mean you could lean your body back at a 45 degree angle into the wind and be completely supported.  There were times when the wind was so strong that you literally could not move forward if you were walking into the wind.  The seals didn’t seem to mind though: 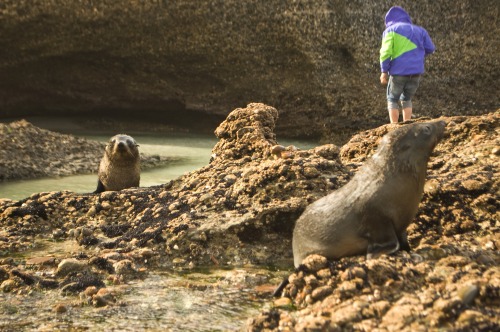 The Bioluminescent Bay of Islands

Writing a blog entry about spending several days in New Zealand’s equivalent of Hawaii is a bit emotionally trying when its been raining pretty much non-stop here in Dunedin for the past week.  In the interest of my loving readers though, I shall bravely attempt to press on.  Good thing this is written on a computer screen otherwise the copious teardrops would likely render my handwriting even more illegible than usual.

Let me introduce the Bay of Islands:

Panorama from the summit of Waewaetorea Island

Pretty, yes?  The Bay of Islands was the only destination we had reservations for prior to the trip so the first half of our journey was scheduled around being there on Tuesday in order to go on an overnight exploration around the Bay on a ship called The Rock.  We arrived in Pahia, the only town of significant size in the area, on Monday night in some of the heaviest rain I’ve ever seen. We had been intending to camp, but the rain and wind was bad enough to make even Jim Cantore squirm so we ended up pursing alternative accommodations.  We briefly got excited about the prospect of staying at  a hostel with a pet parrot but we ended up negotiating a cheaper rate elsewhere.

In a reflection of the good fortune we experienced throughout the trip, by morning the weather had cleared and our concerns that the cruise we had planned our trip around would be canceled were abated.  We spent the morning exploring Pahia, which essentially consisted of walking up and down two streets, wandering along the beach, and attempting to mask our pasty white skin tones that betrayed our South Island origins.  While a pleasant enough town, Pahia was easily the most touristy place I’d been in New Zealand so far (note: this all changed when we went through Rotorua later in the trip…).  Once of the things that I’ve really enjoyed about traveling around New Zealand so far is the (relative) lack of commercial exploitation of the country’s major attractions compared to the US.  Even though I’ve been here at the tail end of high-season, most of the places I’ve been have been delightfully non-crowded and in many places, finding so much as a single gift shop has been difficult.  Not so in Pahia.  Tacky souvenir shops and gaudy “EXPERIENCE NATURE AT IT’S FINEST! SWIM WITH DOLPHINS AND WHALES!!!” signs and banners advertising cruised on multimillion dollar, noisy jetboats were everywhere.

Late in the afternoon, we headed down to the wharf where we were shuttled out to The Rock on a old, slightly sketchy motorboat named the Climax (for reasons which will not be elaborated upon here).  The Rock is a two story former vehicle ferry that was converted into essentially a floating hostel a few decades back.  The upper deck consisted of bedrooms and dorms for up to 30 people while the main deck was a kitchen, lounge, bar, and general hang-out area.  The first evening on the boat consisted of getting to know the other passengers, fishing for snapper off the back end (ahem…stern) of the boat, watching our friend eat the still beating heart of the fish we caught for dinner, a delicious steak and snapper dinner, and in one of the highlights of the trip, night kayaking around the bay.

The excitement in the kayaking did not lie in the kayaking itself but in what was living in the ocean.  The waters around the Bay of Islands are abnormally clear and also happen to be home to a organism known as Noctiluca scintillans, a plankton like creature that absorbs sunlight during the day, and, due to chemical reactions of which I do not know the precise details, emit shimmering blue light when disturbed after dark.  This phenomenon is generically known as bioluminescence and if you take a long exposure photograph of the Noctiluca, they look like this.  (needless to say I was killing myself for not bringing a tripod…)  The “disturbing” in our case was kayak paddles.  With every stroke of the paddle you were rewarded with a quick flash of glittering blue light alongside the boat.  Jumping off the boat into the water was even more impressive.  It was seriously one of the coolest, and yet most bizarre things I’ve ever seen in my life. 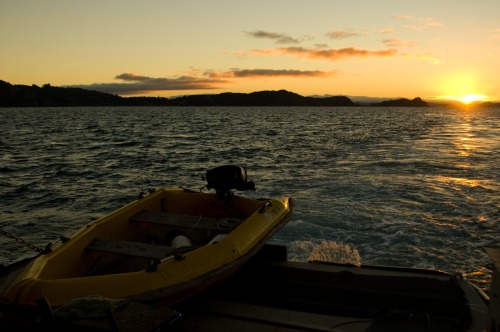 View from the back of the boat at sunset

Day 2 on The Rock was packed with more fun activities.  First thing in the morning we spent about an hour or so snorkeling along the coast of one of the islands for kina, a common and extremely spiny type of sea urchin that was to become part of our lunch later on.  After the snorkeling, we headed over to  Waewaetorea Island, upon which we were the only inhabitants for the next several hours.  Climbing up to the summit of the island offered an absolutely phenomenal panoramic view of the Bay of Islands, which interestingly was one of the first places in New Zealand to be inhabited by the native Maori coming from Polynesia, and also the location of the first European settlements in New Zealand in the late 1700’s.  I would have had absolutely no objections to staying on this island for the rest of the trip, active volcanoes and other attractions be damned.  The weather here was probably the best I’ve experienced during my time in New Zealand, 75-80 degrees and hardly any clouds in the sky.

The delicious innards of the humble kina

As far as I can recall, the 22 or so hours we spent on the Rock was the longest period of time I’d ever spent on a boat in my life.  While I was strongly in favor of stowing away in the engine room, my traveling companions kindly reminded me that if I stayed on the boat, there would be no one to drive the rental car.  Alas, we returned to Pahia in the afternoon to proceed with the rest of our trip.

And thus concludes this blog entry. I’m going to go back to freaking out about the fact that I only have slightly more than a month left here now…adios!