Where the Wild Foods Were: the Hokitika Wildfoods Festival

Imagine the county fair, Halloween, spring break on the beach, and “Bizarre Foods with Andrew Zimmern” all rolled into one.  You would have something resembling the annual Hokitika Wildfoods Festival which I had the opportunity to attend…no, “experience” would probably be a better word…this past weekend.  This bizarre event was started by a local woman in 1990 and is now one of the biggest annual events in New Zealand, attracting up to 20,000 people to a remote west coast town called Hokitika which has a year round population of 3000.

Th entire weekend was an experience really.  I’ll have more on that in the next post but for now I want to focus on the food.  And boy was there food. So much food.  Portion sizes we’re generally small in part due to the fact that everyon wants to try everything and partly due to the fact that many of the things being served aren’t exactly something you’d want to consume in large quantities.  For the sake of posterity, following is a list of all of the different foods that I sampled on Saturday along with some brief comments and thoughts on each one.  For comparison purposes, I have assigned each food a “tastiness grade” which works as follows:

A-Very tasty: I would enthusiastically eat this on a regular basis were it made available to me!

B-Tasty: I actually enjoyed eating this but I would much rather have a Bacon Buttie

C-Meh, it was alright.  Not bad but not real good either

D-Unpleasant: I probably wouldn’t eat this again and I sure as hell wouldn’t pay to eat it again

F-Disgusting: I would need to be offered a very large sum of money and various other benefits to eat this again

Finally a disclaimer: if you are the squeamish type, I can pretty much guarantee you’re gonna want to skip this post.  Come back later this week for some pretty pictures instead.

Huhu grubs: And boy are they fresh! These are the first things you see when you walk in the gates.  Outside a tent was a large stack of rotten firewood surrounded by people wielding axes attacking the wood in search of the huhus.  Once one was found, it was offered up for sale. $3 got me a 2 inch long grub freshly removed from his burrow.  At this point I had the option of eating the thing right then and there or taking him over to the grill first.  Given that I had been at the festival for all of 2 minutes at this point, I opted for the grill.  After a few minutes on the barbie, it was meal time and I must say I was pleasantly surprised.  Not to say that grubs are going to become a major staple in my diet anytime soon but the taste was not that bad.  The best analogy I can think of in terms of taste and consistency is very bland hummus. Unfortunatley, it was rather gritty and tasted as though I was chewing a bunch of sand around in my mouth. 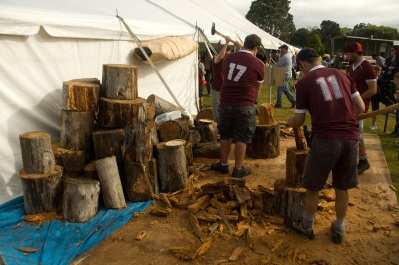 The home of the humble huhu grub 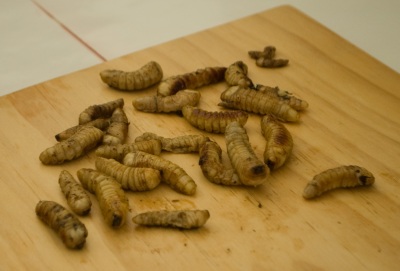 A selection of grilled huhu

Venison sausage: Not exactly the “wildest” food I had today but still mighty tasty!  Deer are domestic animals here in New Zealand and a relatively major food staple.  It is quite common to see large domestic herds of deer on deer farms while driving around rural New Zealand and this was the first time since arriving here that I had had the opportunity to try the venison.

Crocodile: A vendor from Australia was at the festival and their two main offerings we’re crocodile and kangaroo bites, both of which I tried.  The crocodile was a dark white meat, similar to fish in its texture and appearance.  I was not a fan of the flavor however.  It was rather bitter tasting and when bitten into released acidic tasting juices into my mouth. One piece was plenty. 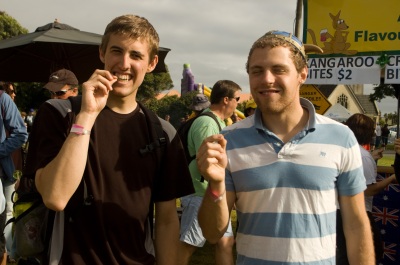 Michael and I munching on some crocodile

Kangaroo: With the exception of the venison sausages, the Kangaroo was definitely the best meat I had today.  And before you go condemning me for eating such a cute, adorable little animal, let me inform you that certain species of kangaroo are basically considered pests across the pond in Australia and are about as common as deer.  A red meat, Kangaroo really doesn’t taste all that different than beef, although the piece I had was pretty tough and not particularly tender.  Flavor was solid though, nice and juicy.

Chocolate covered chili peppers: Again, not the most exotic food but a rather novel idea.  Unlike most of my cohorts, I rather enjoyed these.  I don’t know exactly what kind of peppers they were but they weren’t so hot that you couldn’t taste the flavor of the pepper before the heat set in and I thought it went quite well with the chocolate.

Goat Ice Cream: This was perhaps my most disappointing purchase of the day.  When I saw that they had ice cream made from goat milk, I was psyched.  Goat-related products are big here and I’ve gotten totally hooked on this goat cheese feta that they sell in the grocery store here, it might be the most delicious cheese I’ve ever had.  Apparently, the tastiness of goat milk does not translate into ice cream however.  Remove the word “cream” from the name and that’s basically what it tasted like.  Imagine going to one of those little portable sno-cone huts and getting milk flavored syrup poured over your sno-cone. Ew. A huhu grub sno-cone would have been more delicious I think.

Shark: Fish & Chips are big here but the festival offered an interesting alternative: Shark & Chips!  After trying it, my professional opinion is that they should stick with the fish.  Shark tastes almost exactly like cod or hoki except it is blander and very dry.  Not bad, but why mess with a good thing?

Chocolate covered grasshoppers: I didn’t understand this booths pricing structure at all. For $10, I could have selected my own live grasshopper from a big glass enclosure.  However, for only $4, I could have a pre-selected grasshopper doused in white or milk chocolate.  Duh.  When I first bit into it, this juicy substance squirted out of the ‘hopper and it actually tasted kinda good.  However, after a few seconds, I had made it through all of the chocolate and the easily chewable parts of the grasshopper and was left chewing what were most definitely the wings. That’s never good.

Worm truffles:  This was my only CNF (could not finish) of the day.  Even though the truffle was at least 95% chocolate with only a few tiny worms in the middle, I couldn’t stomach the taste…which I can only compare to that of vomit.  I had to spit it out after only 1 small bite. Absolutely disgusting.

Pig Brain sandwich:  This was an interesting one.  When I closed my eyes and took a bite, it wasn’t half bad.  The meat was extremely tender, mixed in with a relatively tasty cranberry sauce, and had a consistency similar to that of a pulled pork sandwich (it was kind of stringy…)  However, it was so revolting to look at that I think my perception of the taste was probably somewhat altered.

Mountain Oysters: Nope, not seafood.  Anyone from the west will likely have seen these on various menus is the US as “Rocky Mountain Oysters”, a.k.a: bull testicles.  In my own defense, this was not something that I voluntarily purchased myself but I did take a few bites off of one that a friend had purchased.  Again, the perception factor was very much in play here.  The testicle had a very light and fluffy consistency, almost like a marshmallow.  It really didn’t taste like much of anything which makes me wonder why anyone would deliberately order one as a meal.

Whitebait: This was the surprise of the day.  Whitebait look like this. Imagine 50 or so of these slender, almost transparent fish mixed up with egg batter, fried up on the grill into a patty, and then place on a slice of white bread with all of their beady little eyes staring you down as you move them towards your mouth. This would be the essence of a Whitebait Sandwich which, along with the venison sausage, was the tastiest thing I had all day.  Whitebait are some of the most flavorful, yet least “fishy” tasting fish I’ve ever had.  A little salt and lemon juice on top, and you’ve got yourself a fish sandwich of awesome proportions.  Whitebait is actually pretty common here in NZ and apparently you can catch these things in mass quantities almost anywhere along the coast, might need to try that at some point. Or at least hope the grocery store sells them 🙂

I decided to pass on the scorpions and the freakishly popular Horse Semen Shots.  I guess the moral of the day is that there is, apparently, a limit on what I am willing to eat. More on the aftermath, a beach party, and a glacier in part two in which we will return to the theme of “pretty pictures” 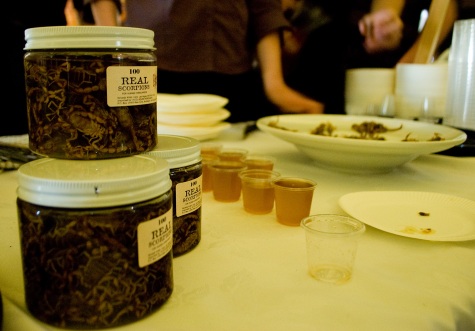 Some things are best left for another day...

This entry was posted on March 13, 2011 by Zach Schierl. It was filed under Food, New Zealand, Study Abroad and was tagged with bizzare foods, Hokitika, huhu grubs, New Zealand, Wildfoods Festival.